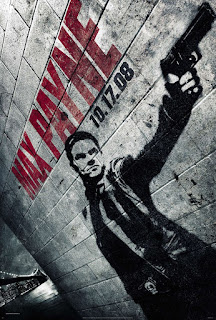 In October of 2001, Rockstar Games would release “Grand Theft Auto III,” a groundbreaking and immediately influential video game that was the hottest shit among kids my age at the time. However, a few months earlier, the publisher released another title with a similarly gritty crime story atmosphere. “Max Payne” was praised at the time for his “Matrix”-style bullet time game play and film noir-inspired plotting. While the series didn't have the blockbuster reach of “GTA,” it remains a cult classic. Enough so that a “Max Payne” movie would unspool before audiences in 2008. The game was refashioned into an action vehicle for Mark Wahlberg, a move that would alienate many of the games' fans.

So who is Max Payne? He's a New York cop whose wife and infant daughter were murdered three years before the story's open. Consumed by his grief, Max has been trying to locate the killer all this time. When he finally discovers a lead, she's brutally killed. Next, his former partner also winds up dead, Max being framed for the murder. He goes on the run, forming a rough partnership with the dead girl's sister. He soon uncovers a plot involving an experimental drug created by the U.S. military and with unexpected connections to cops and million-dollar corporations.

The cinematic “Max Payne” is clearly inspired by another gritty, neo-noir, crime land saga. “Max Payne” wants so badly to be “Sin City.” You can see that in its stylized direction, full of high contrast blacks and whites with big bursts of color. The dialogue is macho and mythic. Women are either sexy dealers of vengeance or graphically disposed-of victims. The metropolis of New York is exaggerated into a hellish landscape of towering skyscrapers, constantly falling snow, and pit-like alleyways. Like Robert Rodriguez' Frank Miller adaptation, the film's noir atmosphere is so hyper-extended that it becomes a fantasy. Why else do we see the drug-induced visions of fiery infernos and demonic male-for-some-reason valkyries flying around? Unlike Rodriguez/Miller's film, “Max Payne” has no sense of humor about itself. So its stylistic excess quickly become ridiculous and funny. Most evidently in the scene where Max roars towards the heavens after surviving a dip in an icy river. Instead of being cool and fun, it's ridiculous and exhausting.

The film doesn't just attempt to emulate the style and visuals of noir genre. It's also trying to weave a twisted and winding plot that draws the viewer in. However, “Max Payne's” plot is so convoluted and awkwardly told, that you quickly gets lost. Max is still a cop but acts like a vigilante right from the get go. He follows a long series of witnesses before stumbling onto the connection between his wife and the Valkyrie drug. He's obviously being framed and betrayed by someone in the police department. The exact motivation behind this is difficult to parse out. Like previous shitty video game movies, “Max Payne” attempts to straighten out its convoluted plot with multiple exposition dumps – in the form of villainous monologues or convenient video tapes – that only manage to annoy audiences further. Further adding to the confusion is how several plot points are intentionally left dangling, presumably to set up a sequel.

“Max Payne” was directed by John Moore, whose other credits include uninspiring titles like “Behind Enemy Lines,” the remake of “The Omen,” and “A Good Day to Die Hard.” Moore's direction doesn't distinguish itself much from what we saw in those movies. The action scenes in “Max Payne” accomplish the rare feat of being overly stylized and surprisingly boring. The game's trademark bullet time effect is utilized a few times but it looks goofy, instead of cool. Especially in a scene where Max practically performs a back flip with a shotgun. The film loves to show people getting tossed through the air by gunshots, which become sillier each time it's repeated. Hyper-dramatic images of shattering glass and billowing flame exists alongside boring shots of blazing machine guns, unsteady zooms, and shaky-cam fight scenes.

When challenged, Mark Wahlberg can be an interesting or even impressive actor. Too often, he's satisfied to pump up his ridiculous macho image in shallow action films. “Max Payne” absolutely belongs to the latter category. Wahlberg blusters his way through the film, wearing the same expression through much of it. He seems actively bored during some scenes, but he might just be trying that hard to be a stern, stoic bad-ass. The rest of the cast seems largely baffled by the script. Mila Kunis clearly can't make heads-or-tails of the material, playing a character with no real personality. Olga Kurylenko is wasted in a part that's almost identical to her “Hitman” role. Beau Bridges seems similarly confused by his role as Max's mentor, a part largely defined by exposition. At least Ludacris is cast amusingly against type as an upright and moral police officer.

Despite the R-rated source material, the studio would demand a PG-13 rating. Yet the MPAA would give “Max” an R anyway, forcing more edits. This is before an R-rated cut was released on DVD, which is what I watched. That tough guy crudeness is so ingrained into the project that I can't imagine what a PG-13 version might've looked like. “Max Payne” was a modest box office success but not enough to greenlight a sequel, leaving all those sequel hooks unexplored. The developers of the games and many “Max Payne” fans hated the movie. I've never really played the games but I have to agree with them there. [4/10]