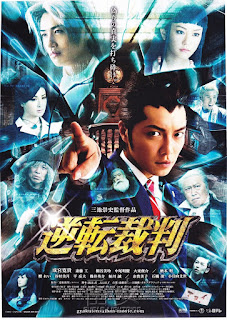 Most of the video game adaptations I've talked about this month have been made in Hollywood. However, other countries have also attempted to translate the gaming medium to the silver screen. Since a lot of video games are made in Japan, it makes sense that there have been several Japanese video game movies. Among the most high-profile is Takashi Miike's “Ace Attorney.” The “Phoenix Wright” series, a rare example of a visual novel – sort of like an interactive manga – breaking through in America, became something of a pop culture meme when I was in college. For a while, people were pointing and shouting “Objection!” everywhere you went. Despite being an adaptation of a very popular game series, made by probably Japan's leading cult filmmaker, the “Ace Attorney” movie has never been officially released in America.

In the setting of “Ace Attorney,” Japan's legal system is so overwhelmed by criminal cases that a new system has been instated, where all court cases are resolved in three days. Phoenix Wright is a novice attorney. After his mentor is murdered, he successfully defends the woman's younger sister, Maya, in court. Next, his childhood rival and friend, Miles Edgeworth, is framed for murder. While Miles initially demands a more experienced defense attorney, Phoenix insists on taking the job. He'll need all his skills to unravel this mystery, which unfolds in some extremely odd directions. 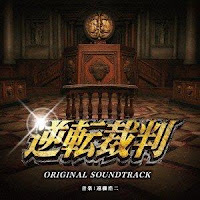 What's really fun and interesting about “Ace Attorney” is that it's a light sci-fi farce that also obeys all the rules of the courtroom drama genre. You still have the underdog defense attorney up against a more assured rival, defending a case he can't hope to win. There's surprise witnesses, shocking new evidence, last minute revelations, and dramatic pleas to the judge that save the day. “Ace Attorney” extends these tropes to their most extreme and absurd point. People attend court cases as if they were sporting events. The bailiff is dressed in a mascot outfit. Confetti falls when a victor is announced. Evidence is presented on Jumbo-Tron like sci-fi monitors. Takashi Miike's camera swoops dramatically around people as they deliberate or shout loud interjections. When somebody says something especially baffling, people in the courtroom fall down, as if knocked over by the absurdity of the statements. Whether “Ace Attorney” is making some satirical point about how justice is treated by people or if this is all in the name of comedic absurdity, I may not have enough insight into Japanese culture to say.

However, I'm willing to bet it's the former. Because “Ace Attorney” is determined to be the wackiest courtroom drama ever made. Ghosts, spiritualism, and a lake monster named Gourdy all wind their way through the plot, becoming part of the evidence. A tokusatsu hero named Steel Samurai plays a minor role in the story. A flashback features a random burst of theatrical martial arts. “Ace Attorney” is so damn nutty, that a cockatoo being called to the witness stand doesn't even rank among its most unrealistic moments. All of this is very intentional, of course. The ridiculous anime haircuts of the video games are faithfully recreated with real people. Characters have silly names like Detective Gumshoe or Larry Buttz. From its earliest moments – when an extremely impractical clock shaped like the Thinker become a plot point – “Ace Attorney” establishes itself as a supremely entertaining live-action cartoon.

Which makes its weird tonal shifts even more surprising. Granted, this seems to truly be a trademark of Takashi Miike, as every film of his I've seen has whiplashed between extreme violence, surreal humor, or low-key melodrama. There's no hardcore torture or sexual assault in “Ace Attorney,” thankfully, but the movie still becomes weirdly serious in its last third. We learn the tragic backstory of a key witness, which is depicted in a naturalistic sequence that totally kills the momentum of the film. “Ace Attorney” never truly recovers and the film's extended denouncement feels overwrought and tired. Maybe keeping the film's extremely goofy tone up forever wouldn't have been practical. But a tighter run time – the film is two hours and fifteen minutes – definitely would've helped with that.

Despite its flaws, “Ace Attorney” still works pretty well. Some of this success is certainly owed to the cast, which commits fully to the surreal and silly material. Hiroki Narimiya is regularly hilarious as Phoenix. Especially during the moments when he becomes really desperate, stumbling through statements or stretching out his words to stall for time. Akiyoshi Nakao, with by far the silliest hair in the whole film, is a similarly goofy performance. Everyone else in the movie plays it totally straight. Takumi Satio as Miles and Ryo Ishibashi as von Karma, the antagonistic attorney for most of the film, are especially good at taking every silly thing that happens one hundred percent serious.

Some have called “Ace Attorney” the best video game movie ever made. It certainly ranks high, by being both faithful to the source material and a highly entertaining motion picture in its own right. Amusingly, this wasn't even Takashi Miike's first video game adaptation, as he previously directed an adaptation of the first “Yakuza” game. (As well as a live action “Yatterman” movie, which is on a similar wavelength to this one but even more aggressively goofy.) By the way, the “Phoenix Wright” multi-media franchise also includes an all-female musical stage adaptation, because Japan can always take something that was weird to begin with and make it even weirder.  [7/10]