From the minute cinema was invented, people were using this medium to adapt other works of art. Literature, plays, even songs, poems, and paintings were quickly turned into movies. So it's not surprising that, some time after the video game was invented in the 1958, people would eventually want to adopt this new art form into motion pictures. Obviously though, video games are a much newer medium than any of the aforementioned ones. They didn't become truly popular until the late seventies and didn't even have anything resembling actual stories until later into the eighties. Even then, the narrative needs of video games were loose, to say the least.

Is this why video game movies are bad? Because gaming is such a new form of expression and the bugs of adaptation haven't been worked out yet? Is it because the pacing needs of a video game, versus a film, are radically different? Or is it because filmmakers don't respect video games, due to it being perceived as nothing but a fancy toy for children? Considering gaming is a billion dollar industry, you'd think they'd have worked the kinks out by now. Yet the “video game movie curse,” the perception that history has taught us movies based on games are usually bad, has been hard to escape.

These are all questions and preconceptions I hope to address over Video Game Movie Month, a whole month of reviews of motion pictures adapted from electronic gaming. Considering most video movies really are bad, this will be an extended act of cinematic masochism. However, I've been so curious about many of these films for so long, that I can't resist doing this. We'll see how good an idea I think this is at the end of the month. 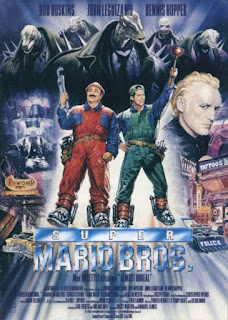 There were certainly iconic video game characters before Nintendo introduced Mario and his brother Luigi in 1983. Pac-Man and the Space Invaders predate them. After the release of the N.E.S. and its killer app, “Super Mario Bros.,” the world was gifted with its first video game hero that had a visible personality. By the early nineties, Mario's popularity had already led to several Saturday morning cartoons, a few comic books, a Japanese anime film, and plenty of miscellaneous merchandise. Naturally, Hollywood would come calling. Producer Roland Joffe would spearhead the production. A script from “Rain Man” writer Barry Morrow, described as an “existential road trip,” was rejected. Directors like Harold Ramis and Greg Beeman passed. Ultimately, “Max Headroom” creators, Rocky Morton and Annabel Jankel, would agree to direct. Morton and Jankel's “Super Mario Bros.” would prove to be a perplexing adaptation that would baffle audiences, fail at the box office, and has fascinated fans ever since.

Mario Mario and Luigi Mario are brothers and struggling plumbers working in Brooklyn. Luigi becomes infatuated with Daisy, a young paleontologist digging for dinosaur bones under the Brooklyn Bridge. After a double date, Mario, Luigi, and Daisy head under the bridge and are tossed into a bizarre alternate universe. This world, inhabited by hyper-evolved dinosaur humanoids and ruled by the corrupt King Koopa, was created when an meteorite hit Earth 65 million years ago. Koopa hopes to discover the last piece of that meteor, fuse the two worlds again, and rule over the humans. He needs Daisy – actually the princess of this world, delivered to Earth with the last meteorite shard as a baby – to accomplish this. Meanwhile, Mario and Luigi will emerge as unlikely heroes.

To call the cinematic “Super Mario Bros.” a loose adaptation of the video game almost sounds like a joke. The two have next to nothing to do with each other. The video game's premise – size-changing Italian-American plumber rescues a princess kidnapped by a dragon-like turtle, saving her mushroom people populated kingdom in the process – is barely reflected in the film. Instead, Morton and Jankel include brief homages to the games. The dinosaur city is covered with sentiment fungus, briefly earning it the nickname “The Mushroom Kingdom.” Mario and Luigi eventually don their trademark outfits and wear special boots to replicate their super-jumping abilities. Mario briefly uses a mushroom as a power-up. A waddling Bob-omb shows up near the end. Characters with names like Toad and the Goombas appear but barely resemble their video game counterparts.

These wild deviations from established “Mario” lore made the movie a target of fandom scorn for many years. Yet step back and look again. “Super Mario Bros.: The Movie” presents an undeniably creative vision. The idea of an interdimensional counterpart to Manhattan populated by humanoid beings evolved from dinosaurs? And the Cretaceous extinction event being the trigger for this dimensional split? You can't deny these are interesting ideas. The movie is sprinkled with concept, similarly nutty but inventive. Like guns – built from Nintendo Super Scopes, another game homage – that cause the target to shift back down the evolutionary ladder. Or the Goombas being portrayed as towering guards in red coats... With tiny, reptilian heads. It's super weird stuff, endearing because of how unexpected and creative it is.

This creative streak is reflected in the movie's sets and production design. Though it resembles the video game Mushroom Kingdom none at all, there's a certain dingy, cyberpunk charm to the Dinohattan setting. Even the globs of disgusting fungus that covers everything adds to the atmosphere. The costumes, in bright colors and frequently decorated with unnecessary spikes, are like a New Wave fashion kids' wildest nightmare. Even the vehicles, which include lots of extraneous pumps and whirling wheels, are fascinating to look at. The movie is a wild sight and you have to appreciate the amount of thought, effort, and sheer nutty design genius put into this world.

Granted, I'm not sure I can confidently say “Super Mario Bros.” is a good movie. That film's reputation as a disaster is not totally undeserved. Tonally, the film is a mess. Its sense of humor often veers towards the obnoxious. Koopa's comic relief sidekicks, Iggy and Spike, are incredibly annoying. (Though their eventual transformation into socialist radicals is kind of fun.) There's a lot of broad, shrieking slapstick in the film. Such as a gun-totting granny being tossed by a large black woman into a moving vehicle. Or a ridiculous exaggerated car chase sequences, eventually ending with two vehicles stacked atop each other. The worst scenes involves Koopa's female sidekick, Lena, who is humiliated, electrocuted, and then killed in an especially baffling and unnecessarily brutal manner.

By all accounts, production of “Super Mario Bros.” was a mess. The directors were inexperienced with such a large project, spending was out-of-control, the script was rewritten daily, and the actors were bored or hostile. Despite that, the cast totally works on screen. Bob Hoskins, dare I say, is fantastically entertaining as Mario. He's gruff but likable, funny but with a smirking, roguish side. Hoskins was the second choice for the part, after Danny DeVito, and did not want to do the film. But you'd never know that from the professional, fun performance he gives. He also has excellent chemistry with John Leguizamo as Luigi, who brings a bright-eyed innocence and sense of fun to the part. The film has many problems but its leading men isn't among them.

“Super Mario Bros.” is a genuinely bizarre movie. Among its characters is a friendly Goomba with a harmonica, which is actually a devolved Mojo Nixon. He's set on fire at one point. There's a mattress chase down an icy tunnel. The finale involves deatomization, the World Trade Center going up in flames, and a man being turned into a chimpanzee. Yet none of these elements are as weird as Dennis Hopper as King Koopa. Hopper is in full-on ham mode and gives a strange, hilarious performance. (Such as in an inexplicable mud bath sequence.) He also resembles our current president way too damn much. He has no respect for women's personal space. He's an egomaniacal, authoritarian sociopath who wants to slap his name and face on everything he sees. He has bad hair, wears cheap suits, and has unnerving skin. He's a greasy scumbag shoved into a position of massive power. The resemblance is so unsettling that I can't believe it wasn't partially intentional. It's not like Trump wasn't already established as a New York villain by 1993. He's not the live action Bowser anybody wanted – I remember, as a kid, being extremely disappointed by his split-second transformation into a T-Rex – but maybe he's the one we deserve.

History remembers “Super Mario Bros.” as a failure. The action scenes are awkward. The comedy is frequently annoying. The plot is bizarre. For what's suppose to be a family film, the tone is somewhat mean-spirited. The film is, overall, far too aggressively weird. About the only thing “Mario” fans seem to like about the film was its depiction of Yoshi, an adorable baby dinosaur brought to life by some fantastically expressive animatronic work. Yet time has been kind to “Super Mario Bros.” Viewed apart from its inspiration, it's an imaginative piece of utterly nuts sci-fi spectacle with an amusingly wild cast. The film's bizarre visions has won it a passionate cult following over the years. Video game movies would get a lot worst over the years, making the many positive elements of “Super Mario Bros.” shine even more. That upcoming, animated “Mario” movie will doubtlessly be closer to the game but I doubt it'll be this fascinatingly strange. [7/10]