1. Rubin and Ed
A buddy comedy like only Trent Harris could (or would) do it. What make this movie so endlessly entertaining are its characters. Crispin Glover, one of my favorite actors, gives his greatest performance. As Rubin Farr, a person who might actually exist though I don’t think anybody but Crispin and Rubin really knows for sure, he reaches a pinnacle of weirdness. Mr. Farr seems to be a person with a history, no matter how bizarre, but he seems real. Howard Hesseman as Ed acts like he’s doing fine but is actually constantly on the edge of a nervous breakdown. He’s someone who is trying to keep his life in order. When the two personalities come together, the result is awesome. Comical flashbacks, hilariously weird dialogue, and an endless interaction between two highly interesting peoples. 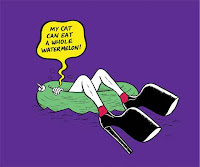 But as the movie goes on, we get more then just weirdly wonderful comedy. As Rubin cries over his beloved dead cat, it’s actually a great moment. We completely, totally understand him. As Ed reaches his nervous breakdown, as he completely snaps back at his ex-wife, played by the one and only Karen Black, we get it. We believe all of it. At the end, when the two totally different people realize how similar they are and how close they have actually become, as they walk away into a dark alleyway appropriately as opposed to the sunset, you can’t help but smile. Man, how can you not love this movie? [Grade: A]

2. Plan 10 from Outer Space
Mormons, bees, motorcycles, alien sex cults. What the hell to make of this? Typical Trent Harris, of course. Lacks the weird emotional resonance of “Rubin and Ed” but makes up for it with just how wonderfully hilarious so much of it is. The movie certainly isn’t predictable. Just when you think you have the strange non-plot about sex crazed Mormons from outer space and the horrible, horrible Secret of the Bees figured out, the film goes in a completely different direction. Hell, there’s even a musical number!

Stefane Loren is quite good in the lead. I’d compare her to Alyson Hanningan with her girl next door cuteness and easy accessibility. Karen Black is the only name in the cast as the rest of the characters appear to be played by this quirky director’s quirky friends. Harris is a native Utah-ian and seems to show a real affection for the history of his home state while at the same time he has the foresight to step back and analyze. Much like the director’s first film, this has an ending that is obviously meant to complete the film on an emotional level more so then on a story level. And I’d say that’s probably a better idea. A satire of religion, sexual politics, conformity, and sci-fi b-movies, “Plan 10 from Outer Space” is highly entertaining and totally unique. [Grade: A]

3. The Beaver Trilogy
Actually filmed over a period of many years, “The Beaver Trilogy” is three different films edited together without any set-up or transition. The first is a documentary about the kind of character that can only exist in small towns. Gary Haft is a young man who likes to perform impressions. Trent meets him by chance in a parking lot. Gary longs for the camera’s attention and it’s impossible to take your eye off him. As he shows off his car, rambling on, obviously trying to make this moment last, immediately you feel some kind of connection to him. His favorite celebrity to impersonate is Oliver Newton John. In full, all singing all dancing, drag. Gary’s dream is to get on television and he seems to have that dream fulfilled as Trent Harris, then a cameraman for a local news program, agrees to record a local talent show Gary has pulled together. We watch this young man get done up in costume by the local mortician, the only person in town who can do make-up, we laugh at the ridiculousness of it all. But later, when he goes on stage and sings his song, not well mind you, but with more heart then you get out of any rock star, you are strangely impressed. It’s sort of beautiful. Maybe it’s just because you feel that his dream is finally being fulfilled or maybe it’s because he got up there and did it and didn’t worry about feeling silly. The film more or less ends there.

But, wait, no it doesn’t. The events we have just witnesses are restaged and re-performed in front of us, not once, but twice. The second time, Sean Penn plays Grooving Gary and the story has been slightly fictionalized. Penn’s performance is a dead-on imitation of the real thing. This version has an actual ending that is both sad and happy. The story gets even more fictionalized as the film folds into itself for a third time. The now renamed Grooving Larry transforms into Crispin Glover and is given a back story as the events are told from his perspective. The shooting is on a much higher film stock and shows off some interesting visual flair. The ending has been changed again and becomes more uplifting. But the story remains the same. I’m not sure what it all means but I do know that “The Beaver Trilogy” is poignant, funny, and totally unique. [Grade: A]
Posted by Bonehead XL at 10:42 PM No comments:

1. Hellraiser
One of the most creative horror movies of the eighties. With the cenobites, Clive Barker created a series of unique villains and the mythology behind them and the puzzle box are even more fascinating. The fact that they aren’t even the main focus of the film shows how strongly they are pulled off on screen. Barker really planted a route for something ingenious here that, sadly, has only been explored on

any level by one of this film’s numerous sequels.

The Frank story is creepily executed and escalates quite nicely. The story is just very tightly plotted and I like how it builds to its climax. Sadly, said climax is lacking something. It seems to be going for a “Shining” level freak-out but it feels a bit tacked on. That’s the only main problem with the film. All in all, “Hellraiser” is a great, original horror film. [Grade: A]

2. Nightbreed
Starts off interesting enough, with a very well directed opening horror sequence that doesn’t really give you a good impression of what’s to come. The great director David Cronenberg acts in this, playing a psychotic psychiatrist determine to cut down on the excess population. He’s actually really good and is easily the best part of the film. A whole movie devoted to his Dr. Decker character would have been great, but he’s really only the villain of the piece.

The majority of the film is a very Clive Barker like horror-fantasy, dealing with a newcomer being initiated into a magical world of monsters. This half of the film is quite good. The build-up to this pay-off is handled nicely and when we actually get there, we are presented with a very interesting fantasy world. However, in the last act the local racist police invade the world and the film takes a very sudden mood shift. Suddenly it seems like they’re going for an action movie route. It doesn’t work and the last half-hour feels rushed and messy. The whole “us against them” angle is also hammered home a bit too much. The ending feels like it’s setting up a franchise, which obviously didn’t happen, which is a shame because I think a sequel could have helped ironed out some of the kinks in the formula. However, as it stands now, “Nightbreed” is a highly interesting fantasy/horror film that isn’t quite as good as it could have been. [Grade: B-]

3. Lord of Illusions
“Lord of Illusions” has a lot of interesting ideas within it. However, the film seems to exist more to showcase these ideas then to tell a story containing them. Weak pacing is definitely the biggest problem here. There is so much build-up to the conclusion. Build-up actually comprises most of the movie. We get neat tidbits of the bigger picture that are rather tantalizing but when said bigger picture is revealed, it’s rather ordinary, normal genre stuff. By the time we get to the finale, we feel a little let-down. There are also too many unanswered questions. Why did Nix attract so many followers in the first place? Why was he brought back when he was and how did his followers know? There’s a lot of discussion about illusion, magic, and what reality really is. However, these themes are left mostly unexplored. The opening sequence is too long and confusing. The conclusion is over too soon and feels rushed.

Scott Bakula is a good actor and does okay in the lead but he never seems to really get a feel for the material. Kevin J. Conner seems half-asleep. The rest of the cast is pretty unnoteworthy.

Stepping away from these problems, there are some positive details. Though Clive Barker does throw in some annoying rock video shots, his direction is still quite good with some interesting camera angles. I usually don’t pay that much attention to it but I thought the set design was really something else. The music is solid too. The CGI hasn’t aged well but the practical effects are above average. The first quarter is a set-up for a good mystery. There are actually a lot of really cool scenes and concepts here, such as the magic trick going wrong or Nix’s containment mask, but the story that holds it together should have been stronger. [Grade: B-]
Posted by Bonehead XL at 9:36 PM No comments:

The main project I'll display here are my Director's Report Cards. The goal here is sit down and watch all of a director's films or all the entries in a series, write a short-ish reviews for each film, and then give them a letter grade.

Of course, some directors have directed a lot of things: commercials, TV shows, short films, music videos, etc. Because I'm lazy, I'm excluding all of those before mentioned items. (I'll occasionally make an exception for short films.) Uncredited work will also be excluded. The focus is definitely on features.

TV movies are tricky. Their reviews depend solely on availability. In other words, I'm not willing to pay one-hundred dollars for a used VHS copy of John Carpenter's "Elvis" just for completest sake. I'll try and include television pilots that are over an hour since I consider them TV movies.

If this project interest you at all, I'll direct you to http/kernunrex.blogspot.com/ who more or less inspired me to do this.

Expect the first report card to show up soon.
Posted by Bonehead XL at 9:59 PM No comments: