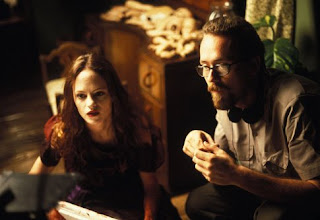 Lucky McKee is the best filmmaker to come out of the horror boom earlier this decade. I'm a massive, massive nerd for everything he's done. Needless to say, this report card will be filled with even more endless rambling then usual.

Anyway, this is something Lucky and his pal Chris Sivertson (The madman responsible for the underrated “The Lost” and the much better then you’ve heard “I Know Who Killed Me.” Not to mention the “Jack and Jill” short in “May.”) threw together for fun. In the sea of shot-on-video garbage out there, the movie certainly stands out. Yes, the production values are as low as you’d expect. None of the gore is all that convincing and there are numerous unintentional lens flares. (At least the filmmakers knew better then to attempt any day-for-night shots.) The whole thing is pretty low rent and gritty. It’s jarring at first but once you get use to the aesthetic, you might find a pretty entertaining little flick.

Not all of the acting is of high quality, Shelli Merril and her unconvincing accent is especially embarrassing and Jesse Hlubik is the only half-way convincing football player, but most of the performances are acceptable, with some of them even being good with some nice, subtle physical details. There’s plenty of pot smoking throughout, even a “Doobie Count” at the end of the credits, but no nudity as Joe Bob Briggs is quick to point out. The one sex scene is shot extremely awkwardly. It’s pretty clear no one was comfortable with that.

The premise of boys and girls going against each other proves that even in these humble beginnings, McKee had more on his mind then just mindless carnage. When the cheerleaders come out on top, the guys loose it. Violence follows, as does a legitimately shocking bear trap gag. The scene cuts to five years later, something I thought was a mistake at first, but before you know it, the zombies are out of their graves and full-blown chaos erupts. It’s pretty clear that any thoughts on gender theory have been tossed aside when the gut munching commences. But, hey, when you got a motorcycles going into a lake, disembowelments, high school reunion massacres, and the big tree-branch French kissing scene, who can complain?

Yes, the zombie make-up isn’t very good and the “Evil Dead” inspired stick attack is really bad, but stuff flies by at such a frantic, manic, fun, pace, you can’t stop to focus on the shortcomings. Honestly, when isn’t zombie carnage set to death metal awesome? The movie is very short, minus the ten minute joke-ridden credits, so it certainly doesn’t overstay its welcome and the ending is even sort of touching. With actors credited as Peckawood and Dirty Ernie, “All Cheerleaders Die” feels like an extended in-joke and has continued to be. It’s a treat for the director’s fans and horror buffs who can really handle low budgets will probably enjoy it too. [Grade: B]

2. May
Oh boy. What to say about “May?” “Watching this movie is like slipping on a comfortable pair of old slippers?” “It’s like Argento with a heart?” Some other magazine friendly by-line? No, no. I love this movie. I love it like a spouse. If it was a person, I would want to marry it, go everywhere with it, make sweet sweet love to it, so on.

When I first saw “May” it touched me on a deeply personal level. Maybe more then I should be proud of, I saw a great deal of myself up on the screen. It seems to me, what Lucky McKee did here, was, without fear, cast all the awkwardness, humiliation, and hurt of being an outcast up on the screen. He gives voice to any number of deep personal pains. He brings them to life literally before bringing them into existence in a pure, bloody, visceral way. There really isn’t any more I can say about that without just dissolving into totally incomprehensible fan-drooling.

So, what else? The movie is really pretty to look out. The use of color is brilliant and each one of the frames has an amazing depth to them. The two combine to create a singular visual fingerprint that, even if the movie had nothing else, cements “May” as a horror classic.

But it has everything else. It feels almost redundant by this point to laud Angela Bettis. But I’ll do it anyway. She’s really uncontrollably essential, all encompassing great. I love you, Angela. You’re beautiful, you’re amazing, you make May into a human being. Not just a great character, but a real person. I really can’t heap enough praise onto her for this performance. The rest of the cast is pretty good. Anna Farris, she of the increasingly weak low brawl comedies, is really sexy, a stereotypical lipstick lesbian, but alluring none the less. Jeremy Sisto is good too, giving Adam a number of angles. James Duvall, he of the indie film cred, has a hilarious small part. (“You wanna’ get some Jujubees with me?” is the best line in the movie.)

The music, by indie singer Jaye Barnes Luckett, is fantastic, incredibly moody, a mixture of very creepy choir music and emotional rock songs. This is a good example of a film that wouldn’t have been nearly as successful without the music.

Okay, enough of the functional criticism and review. I’ve seen the movie many times, obviously, and every time I notice something new. The movie is rife with symbols. Not necessarily symbols in the sense that they mean something to the world at large, but in a deep Jung-ian way. May is a fetishist. She obsesses over tiny, individual things. The big things, the body parts she latches on to, or the small things. They are many repeated images here that you might only catch on repeat viewings and, despite the temptation to do so, I won’t reveal them. (Broken glass, cigarettes, limbs, toy knives, showers, fabric, dolls… Oh poo, I ruined it.) The movie’s funny too, with most of the humor coming from the great, memorable dialogue.

Oh, I haven’t talked about the dolls yet! Soozy, May’s best friend, a doll encased in glass, is a character onto herself. It never comes alive, it doesn’t have to. It’s creepier just staring. And maybe the cracking glass isn’t the most subtle metaphor but the movie makes it work, especially the sound more then anything else. Soozy leads to one of the most iconic horror moments in the movie. If all the, you know, talking and thinking and such turns off the crazy gorehound horror fans, they’ll at least remember the scene people who have seen the movie know what I’m talking about.

A common criticism waged against the movie is May’s evolution from painfully shy lonely nerd to serial killer. A sudden character shift might be appropriate, considering the mind breaking events that proceeded, but I don’t think that was the intention. Especially after May returns to her apartment afterwards, where she resorts to her normal personality. When her Halloween costume goes on, she becomes Soozy, of course. May assumes a persona, to allow her to do what she must. And the ending, a point of debate for some. I’d say its one of the most beautiful things I’ve ever seen. I wouldn’t have it any other way. (There’s a key to understanding the final scene. Earlier, Polly gives a throw-away line, “It’s our imperfections that make us special.” You’ll get it now if you didn’t all ready.)

Okay, so I guess I should point out some imperfections here. I can stand back and see that, maybe, the movie tries to be a little too quirky for its own good, especially earlier on. My one real problem is the opening scene. Though it’s probably a great idea to open a horror movie with a screaming woman, I feel it shows too much, too early. I’ve rambled long enough. “May” is the best horror of the last ten years and one of my all-time favorites. [Grade: A]
Posted by Bonehead XL at 8:13 PM No comments: