You know what I thought halfway through “Scream 4?” “Who directed this?” None of the “Scream” films really feel like Wes Craven movies. Especially when compared to a movie swimming in his trademarks like “My Soul to Take,” it becomes apparent how much the “Scream” franchise is Kevin Williamson’s baby.

If nothing else, “Scream 4” is consistent. The franchise hasn’t changed much. Ten years have passed but 1996 is still with us.

I have two major complaints with “Scream 4.” First off, for the most meta and self-referial of horror series, the movie barely acknowledges the changes in the horror genre over the last decade. There’s lots of idle talk of “reboots” and “remakes.” “Torture porn” gets one brief, blunt dismissal. But, generally speaking, within the universe of “Scream,” it seems like the horror landscape hasn’t changed. These days, slasher films are generally made by and for hardcore fans of the genre. Movies like “Hatchet” and “Behind the Mask” pay homage to eighties slashers and are made by genre-obsessed filmmakers for a niche crowd.

Slashers aren’t mainstream anymore. But, as the opening minutes of the film make obvious, self-referal post-modern slashers apparently never went out of style within the movies universe. “Stab” sequels keep getting churned out. Yes, the killers in this film are hooked up to the internet and the “rules” are similarly updated, but if you’re expecting Ghostface to start mimicking and asking questions about the “Saw” franchise or the J-horror movement, you’ll be disappointed.

In the last reel, it’s made obvious that the most modern aspect of the movie is the killer’s motivation, which are directly tied to reality television and young people’s desire to be famous for doing nothing. While it’s amusing and interesting when it comes, I was expecting “Scream 4” to be a bit more in-the-know. The other disappointment steams from a certain character surviving the entire film, despite being played flatly by a bored, over-the-hill actress and being easily the least interesting of the series’ central trio.

The best aspect of “Scream 4” is, surprisingly, its cast of young newcomers. It’s easy to forget that likable characters were actually one of the strong suits of the original. While there might not be any here as memorable as Randy, the cast is still strong. Hayden Panettiere, an actress I’ve never been impressed with, is easily the most charming and witty of the young girls here. Rory Culken, the most talented of all the Culken brothers, adds another strong performance to his quickly growing list. Erik Knudsen’s character uploads every single thing he does to the internet and is clearly the writer’s most boldfaced attempt to create a “modern” teen. It actually works though and doesn’t come off like a desperate attempt to stay hip. Knudsen’s amusing performance might be solely responsible for this. Emma Roberts, ostensibly the star of the show, doesn’t really get to shin until the end of the movie, where a vicious spitfire emerges from her boring teen starlet shell.

Among the older set, Allison Brie and Marley Shelton both get meaty supporting parts and ham it up accordingly. Courtney Cox does okay as an over-the-hill Gale while David Arquette isn’t given too much to do. As for Sydney… Neve Campbell was never much of an actress. She’s just as wooden as ever here. Sydney, despite being the franchise’s default protagonist, is still boring as hell.

The gore is supposedly amp up but I’d say it’s on the same level of the first movie, which is more violent then people remember. There’s plenty of decent throat slashing and stabbing. There’s really nothing to compete with garage door kill from the first movie, up until a dagger gets buried up to the handle in someone’s forehead. That was cool.

The intensity level isn’t very high but the parking garage sequence, barn house set-piece, and assorted moments in the last twenty minutes are uniformly entertaining. The fun sense of “who-dun-it” injects this entry with a lot of audience interaction. It honestly kept me guessing, trying to figure out who among the cast was the killer. (I still figured it out before the reveal.)

The movie continues after the obligatory “the killer reveals their motivation” scene with an extended hospital sequence. It’s extraneous and drags the end down. Honestly, if the movie had just stopped before that scene it would have taken the series in a daring, exciting new direction.

“Scream 4” is, honestly, the best of the series since the original. It certainly doesn’t reinvent the wheel, or even try to. Kevin Williamson doesn’t have any new tricks up his sleeve. But the movie is a fun, decent way to waste ninety minutes. As a relative non-fan of the franchise, I thought it was pretty good. To someone who is a fan, I suspect they will love it. [Grade: B]
Posted by Bonehead XL at 11:29 AM No comments:

6. Fantastic Mr. Fox
In the months of production before any actual stills surfaced, I wonder how Wes Anderson was going to adapt his signature style to an animated children's film. Would “Fantastic Mr. Fox” represent a shift in style for the filmmaker? How would his trademark eccentricities stand up in G-rated form? Then a trailer premiered and it became apparent that Wes Anderson had made a children’s film without changing his style at all.

“Fantastic Mr. Fox” is a comedy about real-estate, partially anyway. It’s also a comedy about neurotic insecurities and accepting innate, unchanging attributes about one’s self. An important subplot revolves around a son’s jealousy over his talented nephew, that plays off in a far more petty fashion then a similar plot usually does in a kid’s movie. This movie is pretty much a typical Wes Anderson movie with furry animals instead, right down to the retro-soundtrack. He doesn’t even ditch the swearing, instead simply using the word “cuss” in place of all actual profanity. I suppose it shouldn’t surprise me Anderson would remain steadfast in his style.

I’m not sure what kind of kid this movie would appeal too. The comedy is mostly dependent on fast-paced, quirky dialogue and character interaction. The moments of big broad slapstick feel just as out of place as you’d expect. The plot features several convoluted schemes and most of the central irony will probably go over a typical kid’s head. (Though if your kid does get it, they’re probably pretty smart.) Taking the film on its own merits, I will say it ranks above “The Darjeeling Limited” but still comes in well below the rest of the director’s films.

The cast is uniformly excellent. George Clooney is pitch perfect in the title role, as is Meryl Streep as his wife. Jason Schwertzman plays a less confident version of Max from “Rushmore” as the son, Ash, in what is by far the film’s funniest moments. Wally Wolodarsky, seemingly Anderson’s real life sidekick, has a hilarious role as timid, easily fazed sidekick Possum. Anderson’s real brother Eric has another funny, understated role as the source of Ash’s petty scorn. Schwertzman and him play off each other nicely. Bill Murray shows up, of course, as Badger, in what is probably his liveliest role in years. William DaFoe shows up in a bizarre villainous turn as Rat. 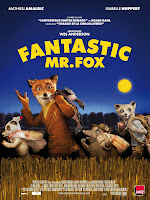 The movie is beautiful to look at, bathed in warm autumn colors. The stop motion animation affords a unique feel, especially when swirling cotton is used in place of smoke, water, or fire. The movie, in many ways, feels like one of Eric Anderson’s illustrations brought to life in corduroy and tweed. The animation also allows for several clever camera angles, the beagle POV shots being my favorite. Beyond the sixties pop songs that naturally pepper the movie, the original score is quite good, especially the use of the “Boggis, Bunce, and Bean” limerick. The movie’s plot really flows nicely, and each inconvenience the story throws at the character is funnier then the last.

“Fantastic Mr. Fox” is standard Wes Anderson, which means, despite being typical, it’s charming, funny, breezy, and infectiously fun. Pretty good for a movie directed almost completely via e-mail. [Grade: B]
Posted by Bonehead XL at 3:18 PM No comments: