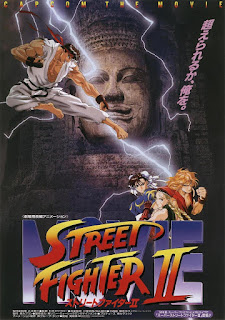 The fighting game presents a special temptation for filmmakers. Unlike many video games, where the player's character was traditionally kept vague so as to further immersion, the rosters of fighting games are full of distinct, memorable characters. Of course, fighting games also have generally vague or even non-existent plots, so as to make room for all those characters and their constant fighting. This presents some difficult challenges for filmmakers and few have been over to overcome it. Capcom's “Street Fighter” series, being probably the most famous fighting game franchise, has seen a number of screen adaptations over the years. The same year the big budget Hollywood version of “Street Fighter” hit theaters, Japan saw the release of “Street Fighter II: The Animated Movie.” While fans were dismissive of the Jean-Claude Van Damme flick, the anime feature was pretty well received.

Unlike the Van Damme version, this “Street Fighter” movie is pretty faithful to the video game. The villainous organization Shadoloo – alternatively described as a crime syndicate and a terrorist organization – is tracking the greatest fighters from around the world, with the goal of brainwashing them and turning them into assassins. Shadoloo's leader, M. Bison, especially has his sight on a mysterious and massively powerful martial artist named Ryu. Ryu, meanwhile, is on the search for Ken Masters, who he trained with at a dojo for ten years. Also on Bison's trail is Interpol agent Chun-Li and U.S. soldier Guile, both of whom have personal vendettas against Bison.

“Street Fighter II: The Animated Movie” begins with a stunning sequence. Alongside an isolated country road, Ryu and Sagat – a seven foot tall Muay Thai master – fight in the dark, their battle illuminated by flashes of lightning. In quick flashes, we see the two performing their special moves upon each other. It's an impressive moment that lays down the ground work for what this “Street Fighter II” is. Namely, a collection of phenomenally animated fight sequences. A back-alley brawl between Ken and T. Hawk is also illustrated with a lot of grit and shadow. The film's extended climax begins with Ryu fighting the brain-washed Ken, before the two team-up and hadouken Bison through a carrier jet. Each of these fight scenes, which is the majority of the movie, is packed full of detail. The blows and special attacks are designed to hit with as much impact as possible. It's a visual feast for the eyes.

The movie is so focused on portraying these spellbinding action sequences that plot is really secondary to its goals. “Street Fighter II: The Animated Movie” has a fairly convoluted story. Shadoloo's exact goals are never clearly defined. On the way to that confrontation between Ryu and Bison, a number of random encounters are depicted. Such as Ryu rescuing a girl buying milk for her family in an Indian village. Or Guile and Chun-Li's entire subplot, which ends up attributing little to the overall plot. A large number of characters are weaved in and out of the plot almost randomly. Dhalsim, Zangief, Blanka, T. Hawk, and Balrog show up for one scene a piece just to make sure they're in the movies. Cammy, Fei Long, and E. Honda's roles in the film could probably have been filled by any character. The loops the story jumps through to incorporate all these characters quickly causes thing to become convoluted. But don't worry about it. It's not that important.

This focus on action scenes makes “Street Fighter II” a ridiculously macho motion picture. The English dub is packed beginning to end with hard rock on the soundtrack, most scenes scored to wailing guitars. This is a movie devoted to grunting dudes, pulsating biceps and tightly wound sinew. There's a completely gratuitous shower scene for Chun-Li. This is followed by another beautifully animated fight scene between her and Vega (given an especially psychotic characterization here), where Chun-Li is dressed in her underwear and a big t-shirt that is slowly sliced away. Naturally, Cammy's tactical battle thong is maintained during her brief scenes.

Even this is not the movie's most absurdly testosterone-driven moment. You see, Ryu and Ken have a special bond. Ryu is haunted by his memories of Ken. He still wears the red headband his BFF gave him all those years ago. When Ken is brainwashed by Bison, Ryu can hardly bring himself to fight him. Ken overcomes the villainous reprogramming by thinking about how much he loves his lifelong partner. Earlier, Ryu is the first thing (a naked, bound) Ken thinks of when Bison invades his thoughts. The two have a very special bond, is what I'm saying. Also, the minute Ryu sees Ken's girlfriend, he quickly walks in the other direction. I love action movies that feature these sort of bro-tastic relationship but are completely unaware of how gay they are. It's delightful. 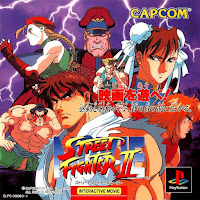 “Street Fighter II: The Animated Movie” would be a genuine box office success in Japan, being the fifth highest grossing native film of 1994 there. This led to a number of other anime adaptations of fighting games, ranging from well-known titles like “Tekken” to relatively obscure ones like “Battle Arena Toshinden.” (That “Darkstalkers” anime I reviewed a while back was also among these.) All of these are pretty poorly regarded, the fad quickly burning itself out. Of course, there have been other “Street Fighter” anime as well. “Street Fighter II: V” was made by much of the same crew as this movie and is supposedly okay, though the later attempts have been less well received. Though you can't call it an especially insightful or gracefully plotted motion picture, “Street Fighter II: The Animated Movie” gives me pretty much everything I think I'd want from a cinematic adaptation of this property. And it's just so damn cool to look at too. [8/10]