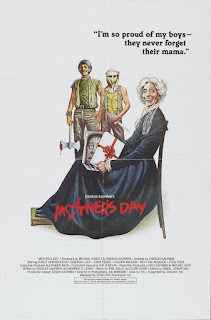 The effect “Halloween” had on the American independent film landscape was seemingly instantaneous. Even before “Friday the 13th” made it clear that any calendar event could be the basis for a successful slasher flick, this formula was applied to other holidays. Such as “Mother's Day,” a squeaky clean tradition devoted to celebrating moms everywhere. Actually shot at the same time as “Friday the 13th,” across the same New Jersey lake, the film would be an early credit of Charles Kaufman. Of course, Charles is the brother of Lloyd Kaufman, the co-founder of the infamous Troma Studios. Funny enough, Lloyd wanted nothing to do with “Mother's Day” and refused to participate in its production. (Troma was focused on sex comedies at the time and wouldn't start making horror films until later in the decade.) Despite that, Troma would end up as the rights-holder of “Mother's Day” after its original production company fell apart.

Ever since graduating college, friends Abbey, Jackie, and Trina get together every ten years for a summertime trip. This year, the friends camp out in the New Jersey forest. Unbeknownst to them, the woods are now the home of Ike and Addley, a pair of murdering and raping psychotic man-children. The boys often perform these murders at the behest of their equally deranged mother. Abbey, Jackie, and Trina are captured and held captive in the family's dilapidated house, where they are tortured and assaulted. After Jackie is killed, Abbey and Trina escape and plot revenge against the demented killers. 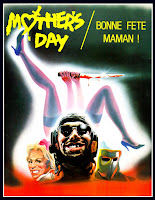 Even though “Mother's Day” is not technically a Troma film, and Lloyd Kaufman had no hand in making it, you can tell Charles' directorial aesthetic is comparable to his brother's. “Mother's Day” similarly combines crude humor and cultural satire with hardcore exploitation. The family in “Mother's Day” endlessly consume the most inane television possible. (A TV is later weaponized.) The boys debate about punk versus disco. They read muscle magazines, eat Trix, and decorate their bedroom with Sesame Street characters. Mom, along with a group of untrustworthy hippies, is shown attending an E.S.T. style self-help seminar. The film is definitely making some sort of point by having these deranged killers be regular consumers of junk food pop culture. It seems Kaufman was taking fire at annoying stuff floating around in American culture at the time... And then included crude jokes about bear poop and cocaine.

With its intentionally absurd characters and bizarre cultural references, “Mother's Day” functions as a horror/comedy. Yet the movie also had to meet certain exploitation movie standards, another hallmark of the Troma style. So “Mother's Day” is also a very rough rape-and-revenge movie. Ike and Addley brutally attack women through this film. In the opening, a female hippy is forcefully disrobed, beaten, and partially raped. Later, the same fate is bestowed upon the vacationing women. The rape scenes focus on the pain and humiliation the female victims are feeling. There's an atmosphere of sexual menace floating throughout all of “Mother's Day.” Even when rape isn't happening on-screen, the female characters are in a constantly threatened state. Despite its wacky humor, “Mother's Day” still ends up being a nihilistic and deeply unpleasant viewing experience. 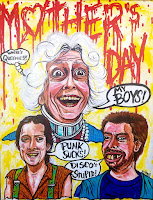 The movie's rape scenes are bracing. However, its gore is not especially convincing, another Troma tradition. Clearly fake heads are lobbed off while bright orange blood spews out. Yet this doesn't hold “Mother's Day” back from operating as a decent horror movie from time to time. Kaufman has a decent grasp on how to generate suspense. There's a sequence where Abbey and Trisna lower Jackie down out of the bedroom inside a sleeping bag, while Addley and Ike roughhouse down below. It's an extended moment, the audience wondering if the girls will escape in time without being detected. The scene ends with the squirm-inducing shot of hands torn open from rope burn. There are a few decently suspenseful moments like that throughout “Mother's Day.” Or, alternatively, scenes of shock-horror that genuinely catch the viewer off-guard, like the bizarre and out-of-left-field twist ending.

More than anything else, what I most like about “Mother's Day” is the supremely strange world its antagonists occupy. The film was shot in a real abandoned house, one the previous owner was murdered in. The walls are covered with vulgar graffiti and filthy trash lays everywhere. The squalor shows some real skill on the production designer's behalf, as it all reflects on the bizarre personalities of the family. Even though Ike and Addley are vicious killers, they still love their mama, who insists she gets kisses whenever they come home. The girls are raped in bizarre routines, the deranged brothers acting out twisted versions of typical romantic situations at Mother's insistence. The killers may be sick and evil but they have thoughts and opinions. These very strange personalities are reflected in the film's tone and makes it an odd but unique ride. 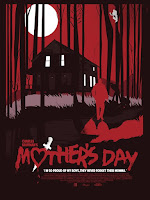 Further selling this depraved feeling is a truly committed cast. Frederick Coffin (credited as Holden McGuire) and Billy Ray McQuade are totally convincing as the insane brothers. They act like overgrown children, squabbling in the way siblings do, yet are equally believable as backwoods lunatics. Even better is Beatrice Pons, credited as Rose Ross, as Mom. Pons plays Mother as someone who sees rape, murder, insanity and littering as totally normal behavior. She gives the impression of an almost wholesome old woman, despite the sordidness of everything happening around her. As for the three women, I really like the way their interactions are written. A scene where they chat about life, being suddenly interrupted by the attacking killers, is actually pretty shocking. The script makes sure to give each women a backstory, Abbey's especially coming into play near the end.

By the way, there's no indication that “Mother's Day” is actually set on May 12th. Despite its cheapness, nastiness, and oddness, “Mother's Day” would be popular in theaters and especially on video. Its fantastic and unforgettable poster art probably had a lot to do with that. The film has garnered something of a reputation as a sleazy cult classic. So much so that it even got a really lousy in-name-only remake during that weird time in the last decade, when a bunch of eighties slashers where getting remade. Yet even after that, and after many Troma films featured a comparable tone, there still hasn't been a horror movie quite like “Mother's Day.” [7/10]