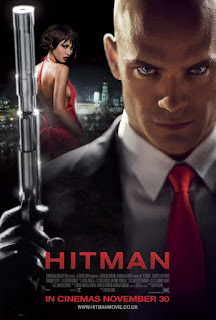 Video games and the film industry have an interesting, back-and-forth relationship. Movies based on games tend to be bad. Games based on movies tend to be bad. Yet things work out better when they just influence one another. For a while, “Dead Space” was one of the best “Alien” video games. Similarly, “Crank” is a better “Grand Theft Auto” movie than any official adaptation could hope to be. Hong Kong action flicks, like “The Killer,” would influence the creation of the popular “Hitman” video game series. A few years later, the “Transporter” film series would swipe most of that game's visual aesthetic. Which meant, when an actual “Hitman” movie hit theaters in 2007, it already felt a bit warmed over. This didn't stop the film from becoming a decent commercial success.

A secret organization known only as the, um, Organization genetically engineers bald-headed, bar-coded boys to be the perfect assassins, training them from birth and giving them numbers instead of names. Agent 47 is the best of this distinguished lot. After a successful hit, his boss tells him to publicly assassinate the president of Russia, Mikhail Belicoff. After killing Belicoff, 47 is informed that he actually murdered a look-a-like. Soon, he's being pursued by his own Organization. Teaming up with Nika, Belicoff's abused mistress, he's determined to get to the bottom of things.

“Hitman” is trying to be a twisty neo-noir for the video game generation. The film begins with 47 confronting an Interpol agent played by Dougray Scott in his home. The rest of the movie is a flashback, leading up to this moment. The plot is full of double-crosses, look-a-likes, and secret favors between old friends being called in. And maybe it's just me but I couldn't follow any of it. The villain's plan seems to change from scene to scene. Supporting characters are implied to be bad guys but never do anything. Agent 47 is said to be a genius manipulating everyone but he mostly just seems to know everything without explanation. The subplot involving the Interpol agent adds little to the story. Weirdly, we never learn anything about the Organization that created 47, why they turn on him, or how he feels about it. “Hitman” seems determined to appear vague and mysterious, quickly leaving the audience in the dust.

I've never played any of the “Hitman” video games and don't really have an opinion about them. Speaking as an uninformed outsider, Agent 47 seems to be such a beloved character because he's a graceful bad-ass, effortlessly exterminating his targets without remorse but in the most sensible fashion possible. The movie version seems to stray from this pattern. There's very little of the disguising, sneaking around, and stealthily disposing of victims I associate with the games. Timothy Olyphant, looking absolutely ridiculous with a shaved head, seems terminally miscast. (Olyphant was a last minute replacement for comfortably bald Vin Diesel.) His Agent 47 squints a lot, contemplating the nature of his business, and generally seeming very uncomfortable. Moreover, the entire plot of the movie hinges on this ruthless killer refusing to kill a woman. Why? Because her face tattoo reminds him of himself and that's pretty much it. Like I said, I've never played a “Hitman” game but falling in love with a girl just because she's pretty doesn't seem like the kind of thing Agent 47 would do. 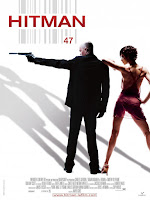 Despite there being little reason for Nika to tag along with Agent 47 on this adventure, their relationship still ends up being the best part of the film. He's gruff with her initially, of course, but soon his heart begins to defrost. This is visible when he gives her a knowing glance after buying her breakfast and threatening to shove her in the trunk. Nika is quickly attracted to this mysterious, murderous man, attempting to seduce him repeatedly. The film never confirms this but the implication seems to be that 47 is a virgin. That he's intimidated by such a sexually vivacious woman. That's an interesting dynamic! Instead of leaning into that, the relationship never evolves pass it. Nika exits the film before the last act, “Hitman” totally falling into incoherence afterwards. Olga Kurylenko does her best to flesh out the thinly written part.

“Hitman” was directed by Xavier Gens, right after his extreme French horror flick “Frontier(s)” received some mild hype. Gens was probably chosen because of the visual flashiness he displayed in his debut. Compared to some of the wretched action movies I've watched this month, “Hitman” doesn't look too bad. At least you can mostly follow the shoot-outs and sword fights. Yet they feel seriously uninspired. A shoot-out with a weapons' dealer or the final showdown in an old church features lots of high-intensity shots of machine guns firing. There's nothing much interesting about it, the shoot-outs quickly fading into each other. The only scene that really stands out is a lightly ridiculous sword-fight on a train with other agents. It's a very dumb moment – the agents deciding a sword fight would be easier instead of just shooting each other – but at least there's some panache there. The rest of the film's violence is competent but boring, lacking identity.

“Hitman” would be a decent commercial success, grossing about 100 million against a 22 million dollar budget. The film seemed primed to launch a series, considering the many unexplored plot points introduced here. Yet a sequel would never quite gain traction. Timothy Olyphant admitted he only made this film because he needed the money, so obviously he wouldn't return for a sequel. Despite having a script for a part two ready to go, a reboot would be greenlit instead. “Hitman: Agent 47,” starring someone named Rupert Friend, came out in 2015 to okay box office but general public indifference. Meanwhile, the public has seen a hundred other movies about cool bald dudes in suits killing guys, so maybe the market is just saturated. [5/10]