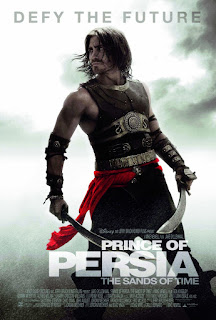 By 2010, many video game adaptations were still weird flops. However, enough of them had become commercial successes for a major studio to take a risk on one. In 2009, Jerry Bruckheimer and Disney acquired the film rights to the “Prince of Persia” video game series. The game developers who rebooted the once forgotten series would be intimately involved with the film's development. (That Disney would make this adaptation was fitting, as their “Aladdin” was doubtlessly an influence on the reboot.) “Prince of Persia: The Sands of Time” was positioned by the studio as the next “Pirates of the Caribbean,” a live action adventure film that would launch a long-running series of highly profitable blockbusters. It didn't quite work out that way.

During the ancient days of the Persian empire, wise King Sharaman adopts a homeless street rat named Dastan after seeing the boy perform a brave act. Dastan becomes one of the princes of Persia, seeking adventure out with his royal brothers. The king's brother, Nizam, learns the neighboring kingdom of Alamut is going to act Persia. The royal forces attack the city, captures beautiful Princess Tamina, with Dastan grabbing an ornate dagger. Soon afterwards, King Sharaman is murdered and Dastan is framed for the crime. He goes on the run with Tamina and learns that the dagger allows the user to travel a few seconds back through time, enough to undo a fatal mistake. He soon discovers his uncle killed the king and is seeking the magical sands that power the dagger for his own nefarious purposes.

As I said, the creator of the “The Sands of Time” game, Jordan Mechner, wrote the first draft of the script. It was re-written by a trio of screenwriters, so I have no idea how closely the finished product reflects Mechner's ideas. However, I suspect many of his ideas were maintained because “Prince of Persia” is way too invested in its own lore. Convoluted mythology drives the plot, often dump on the viewer in weighty monologues. Certain criteria must be met by various parties for the plot devices to function properly. Just like in a video game, the characters spend the whole film chasing after a power-up. The power-up's ability is finite, forcing the protagonist to collect more magical fuel. It's all very boring, another video game movie that feels more like playing a video game than its own experience.

I don't know if the movie's mythology is full of shit or if it just fails to get the viewer invested in its nonsensical lore. The lack of a likable protagonist is a big problem for “Prince of Persia.” Prince Dastan has no problem raiding a clearly peaceful city at the beginning of the film. Immediately after his father dies before his eyes, he has to go on the run, leaving no time for mourning. He spends most of the first hour acting selfishly. His attempted romance with Princess Tamina does not humanize Dastan or the princess. She comes off as stuck-up know-it-all, deriding Dastan for his perceived lack of intelligence. Yet the humiliating things the script does to her next – enslaved by bandits, killed off before the inevitable time travel re-do – come off as mean-spirited. The whole movie feels like that, characters repeatedly dying and then being brought back via magic, in a way that is both needlessly nasty and saps suspense.

Perhaps the film was hoping the charms of its cast would make up for the lack of likable characters. This was Jake Gyllenhaal, a respected performer with more indie cred than mainstream success, making his big attempt at being an action star. He adapts a cheesy British accent, perhaps to make up for the obvious fact that he's not Persian, and smugly smirks his way through most of the film. Gemma Arterton is spellbindingly gorgeous as Princess Tamina but can't breath much life into the hopelessly dull dialogue she's given. Ben Kingsley, making his second appearance this month, once again goes weirdly subdued when playing a cartoonish villain. Alfred Molina largely steals the show as a proto-libertarian bandit, given most of the film's funniest lines.

“Prince of Persia” was directed by Mike Newell. With the exception of the fourth “Harry Potter” film, Newell is better known for dramas, making him an odd pick for a big adventure movie. This is reflected in the film's supremely tacky action sequences. There's a lot of slow motion in “Prince of Persia” and not just during the time reversing shots. Dramatic flips and big sword fights become overblown with cheesy slow-mo. Yet many other shots are awkwardly framed, spearings happening just off-screen or stabbings occurring at odd angles. The CGI is not well integrated either, especially during the big swirling sandstorms or various projectiles that leap towards the viewer's face. The general clumsiness peaks during a hilariously dumb moment where  a minor villain suddenly enters into frame.

As I said, Disney had high hopes for “Prince of Persia.” The film was given a prominent May release date. McFarlane Toys produced a whole line of action figures, targeted at both kids and collectors. Alanis Morissette recorded a pop charts ready song to go with the movie. There was even Lego sets. However, the general lackluster quality of the film and a controversy surrounding whitewashing kept American audiences away. “Prince of Persia” flopped domestically but did better overseas, making it one of the highest-grossing video game movies... But the film still fell short of earning a profit, meaning this dull film would not spawn a dull franchise. [5/10]