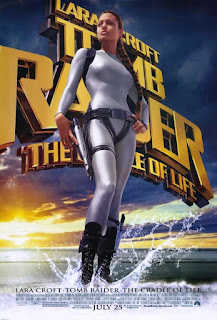 Lara Croft's primary inspiration was obviously Indiana Jones, what with the tomb raiding and the fantastical MacGuffins. However, the movie studios clearly saw Croft as something like a gender-swapped James Bond. She jet-sets around the world, having adventures in exotic locations. Limitless resources allow her access to crazy gadgets and vehicles. Each movie comes with another hunky love interest and another colorful villain. Clearly, Paramount was hopeful Lara would spawn an equally successful film series. Two years after the original, the inelegantly entitled “Lara Croft: Tomb Raider – The Cradle of Life” would blast into theaters. Though still popular, it grossed considerably less than than the original, bringing the would-be franchise to a speedy end.

In Greece, Lara Croft explores a newly uncovered temple that stored Alexander the Great's most valuable relics. A Chinese gangster attacks, kills her friends, and steals a mysterious orb. The orb is actually a map that leads to the Cradle of Life, the mythical resting place of the equally legendary Pandora's Box. Jonathan Reiss, a Nobel-winning scientist turned bio-terrorist, seeks the devastating virus supposedly inside the Box. MI-6 recruits Lara to locate the sphere and prevent Reiss from unleashing the ancient epidemic. She agrees, on account of her old friend – thief Terry Sheridan – is released from prison. And thus another globe-trotting journey begins.

A big problem with the first “Tomb Raider” is that Lara Croft never came to life as a character, existing only as a collection of extreme personality quirks. In “The Cradle of Life,” Lara is still cool-for-cool's-sake. She's introduced here flipping a jet ski through the air while wearing a tiny black bikini. She has a heated kendo sword fight with her butler, a gratuitously flashy mounted shooting sequence, and a totally unnecessary motorcycle race scene. Yet slight attempts are made to humanize her. Angelina Jolie is allowed to smile a few times, telling jokes, interacting with friends and children more. The penultimate scene gives her something of an emotional arc, forcing Lara to choose between the man she loves and the fate of the world. It's not much – it's not much at all – but it is an improvement over the first.

For the sequel, director Simon West was traded out for Jan de Bont. This might seem like an upgrade, as “Speed” was a way better movie than “Con Air.” And it is true that “The Cradle of Life's” action scenes are less needlessly flashy than the first. There's less frenzied cross-cutting. A wing suit free fall sequences, though extremely silly, is even kind of cool. However, the concepts behind the action scenes aren't any less dumb. An early scene has Lara gratuitously flipping around ancient support beams while wearing a skin-tight diving suit. (Most of the advertising was built around that diving suit.) A moment where she slides down a cliffside on a rope, blasting guys above and below her, is hilariously impractical. A truly inessential moment has her piloting a high-tech airplane. Lara pole-volts onto a helicopter, in another laugher of a scene. It's all ridiculous in a thoroughly unlovable fashion. The film's stupidity climaxes during a fight among a collection of Terracotta Soldiers, where Lara eventually uses rifle dancing to defend herself for some damn reason.

The first “Tomb Raider's” plot was a convoluted series of fetch quest, Lara leaping from one locale to another in search of the next plot device. The sequel double-downs on this, giving Lara more mini-bosses to fight off, more continents to travel to, more MacGuffins to track down. However, the sequel does do a slightly better job of utilizing its fantasy elements. The Cradle of Life is, for some reason, guarded by monsters that leap out of rocks. The cave within the Cradle features some Escher-esque bending geometry. It meshes with the movie's world slightly better than the magical statues and time travel of the first did.

The supporting cast is also slightly more memorable this time. Gerard Butler is Lara's new Hunk of the Week. The script gives him much more to do than Daniel Craig last time, the two actors allowed to develop some chemistry. They even come close to sharing a steamy love scene, which the movie stupidly cuts short. Ciaran Hinds is the primary bad guy. Hinds is an actor that excels at overacting in hammy villain parts. He still feels like an adversary from a middling Pierce Brosnan era Bond flick but I don't even remember the bad guy from the first “Tomb Raider,” so it's an improvement.

“The Cradle of Life” made 156 million dollars at the box office. That's a lot but only about half of what the original made. With Angelina Jolie disinterested in returning to the part, Lara Croft's cinematic adventures seemed destined to end here. Paramount pinned the sequel's disappointing performance on the latest entry in the video game series, “Tomb Raider: Angel of Darkness,” being a rushed, glitchy mess. I suggest another possibility. A lot of people went to see the first one based on the hype, realized it sucked, and decided to skip the sequel. It's a pattern that has been repeated with other bad films that were inexplicably popular enough to get sequels. While a minor improvement over the first, “The Cradle of Life” is still an uninspiring, joylessly dumb, and generally boring popcorn flick. This is a movie where the main character punches a shark in the face and still manages to be largely a bore. [5/10]