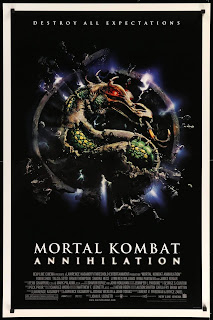 The first “Mortal Kombat” ended with a satisfying sequel hook. Earthrealm had won the Mortal Kombat tournament but Emperor Shao Kahn – the highly intimidating final boss from the second “Mortal Kombat” game – barged in at the last minute and demanded another fight. Now that's how you get viewers excited to see a sequel! What a cinematic “Mortal Kombat II” might've been like, going off that ending, is something kid-me thought about frequently during 1996. When that sequel, “Mortal Kombat: Annihilation,” materialized in 1997, I found myself being skeptical. I skipped the film in theaters after all my friends said it was bad. When I finally rented the film from my local video store, it became one of the most disappointing viewings of my childhood. How bad does a movie have to be to disappoint a nine year old? If you're asking that question, you've probably never seen “Mortal Kombat: Annihilation.”

“Annihilation” fucks up right from the beginning, by retconning the original movie's ending. Instead of a giant Shao Kahn exploding a temple, a much smaller Shao Kahn marches on-screen with an army of goons. The sequel further agitates fans by immediately killing off Johnny Cage, among the first film's most likable characters. What follows is a plot that is simultaneously convoluted and incredibly thin. Shao Kahn has broken the rules of Mortal Kombat and invaded Earthrealm, causing the two to violently merge. Raiden sends Liu Kang to trainer Nightwolf, so he'll have the strength to defeat Kahn. Kitana's dead mom Sindel has been resurrected as an evil witch. Sonya Blade soon recruits friend Jax, while Raiden goes off to seek the approval of the Elder Gods. And then a bunch of other shit happens, all on the way to the heroes' confrontation with the bad guys.

If the first “Mortal Kombat” had a likably exaggerated visual style, the sequel deploys that same style without any proper balance or grace. “Annihilation” is an astonishingly ugly movie. Within the first scene, characters are standing in front of badly matted green screens. Fight scenes occur upon an obviously fake block of ice. These melees are peppered with awkward slow motion. A totally pointless sequence of people traveling around in giant balls is shot in awkward fast motion. Every scene is colored in some hideous shade of purple or red. More than anything else, the movie thrusts absolutely atrocious CGI into the viewers' face. The same computer generated dragon tattoo flies towards the screen repeatedly. The goofiest looking reptilian demons leap out of walls. The final fight, where Liu Kang turns into a dragon and Kahn turns into some sort of tape-worm hydra, is a mishmash of hemorrhoidic digital images.

You would think “Mortal Kombat: Annihilation” would look as good as the original, since it was directed by the first movie's cinematographer. Yet the delicate balance the first had is all out of wack here. Look at the story. The script introduces new characters without much rhyme or reason. Someone like Rain, a joke character from the game, is in a few scenes before being bluntly killed off. New versions of Sub-Zero and Scorpion show up for one scene, leave, and are never seen again. Milena and Baraka quite literally leap out of nowhere just to participate in a fight scene. Semi-major characters like Jade or Ermac appear half-way through. Seemingly important characters, like Nightwolf, appear once and are forgotten. It's a complete mess.

Another way “Mortal Kombat: Annihilation” immediately disenchanted fans of the original is by recasting a large portion of the characters. Only Robin Shou, visibly straining to make sense of the baffling script, and Taliso Sato, her range pushed to its limit, returned. Sandra Hess' Sonya Blade acts like a totally different character from Bridgette Wilson's Sonya. While Christopher Lambert's Raiden had a rakish grin and told jokes, James Remar plays Raiden as a grim deliverer of exposition. Shao Kahn last appeared as a towering God. Brian Thompson is very tall and deep-voiced but, Kahn frequently without his skull-helmet, he looks very human. Most of the new actors in the film give terrible performance, sweatily barking their way through atrocious dialogue.

But what about the fight scenes? I mean, the first “Mortal Kombat” was largely a collection of action scenes and it was fun. Well, the same half-assed approach the sequel took to everything else is evident in the action sequences. No attempts are made to disguise stuntmen. Some of the stunts, like Sub-Zero's entrance or Sheeva's death, become pieces of unintentional physical comedy. Many of the fight scenes are awkwardly directed, to say the least. Yet, occasionally, a pretty decent fight scene appears. The sequence where Sonya and Jax fight Cyrex and some other goons is decently executed. As is Sonya's mud-wrestling scene with Milena. By the time you make it to the end, most of the fights between actual flesh-and-blood combatants are competently assembled.

Even with that being true, “Mortal Kombat: Annihilation” is a complete fiasco. The special effects are so bad, they become surreal. The script is so random, it feels like it was written via word disassociation. The acting is everything acting is suppose to avoid. About the only thing I can recommend about the movie is that some of the fight scenes are decent. Otherwise, I genuinely do not know how a film this bad, this incompetently assembled, was released by a mainstream studio. While director John R. Leonetti would eventually jump back, directing crappy but profitable horror films like “Annabelle” or “Wish Upon,” the “Mortal Kombat” film franchise has yet to. Beyond the many video games, the series has continued through television shows, an internet series, and a live stage show but plans to make another movie have always stalled. It would seem this sequel annihilated the franchise's cinematic future. [4/10]