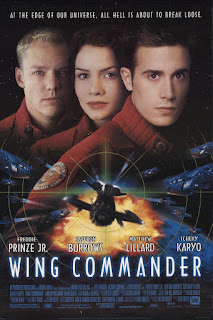 I've never known anyone who has played a “Wing Commander” video game, much less played one myself. The only exposure I had to the franchise as a kid was the Saturday morning cartoon, “Wing Commander Academy,” which I think I saw two episodes of. Yet apparently the sci-fi flight simulator/space combat series was quite popular. Including various spin-offs, about thirteen games have been produced. The series is notable for being among the first video games to feature recognizable actors, as Mark Hamill and Malcolm McDowell appeared in several of the installments. “Wing Commander” was popular enough at the time to support a card game and a series of novels, so someone must've thought a movie could work too. Not so fast. The cinematic “Wing Commander” entered theaters in March of 1999, were it was ignored by most people and reviled by those that did see it.

“Wing Commander” is set 600 years in the future, long after mankind has colonized the stars, long enough for the new population to have had cosmic civil wars and conflicts all their own. This was before the Terran Confederation encountered the Kilrathi, a race of feline-like aliens absolutely determined to wipe out all humanity. The plot begins when the Kilrathi capture an important navigational device that will lead them to Earth. A ship called the Tiger Claw is ordered to cut the Kilrathi forces off at the pass. Lt. Christopher “Maverick” Priest and Todd “Maniac” Marshall are among the brave Fighter pilots that will defend Earth against the attackers. 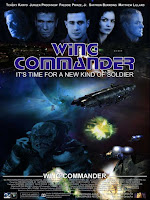 Chris Roberts, the original creator of the “Wing Commander” games, directed, co-wrote, and produced the film adaptation. Roberts was clearly highly invested in the lore of the franchise. His film makes no attempt to be accessible to anyone not already deeply familiar with “Wing Commander” mythology. The opening credits serve as an exposition dump, explaining how humanity first encountered the Kilrathi empire. From there, the film drops us right into the middle of the conflict. The script immediately begins bombarding us with specific phrases and information. Characters communicate almost exclusively in lingo and words exclusive to this world. Vague references are made to civil wars in the past, special pieces of technology, astrological events, Terran history, and military maneuvers with little attempt to explain any of this to the viewer. It’s almost completely incomprehensible. I’ve seen unsubtled foreign language and understood them more than this.

With such an aggressively inaccessible story, “Wing Commander” can only hope to entertain as sci-fi spectacle. It fails in this regard too. The special effects are unimpressive. The ship designs are blurry and unmemorable. The CGI is weightless — yes, even in space — and the environments are unconvincing. The practical effects are no better. A couple shots of people sitting in the Rapiers — that’s what they call the fighter jets — recall old episodes of “Battlestar Galactica.” We don’t get a good look at the Kilrathi until well into the film. They are bulky creatures that don’t move very well and are largely kept in the dark. Further confounding things is that the action scenes are hard to follow. The camera never gets a grip on where everyone is in space. The action we can understand is unimpressive, aliens falling down after being shot or ships slowly burning on the runway.

If a viewer is baffled by the complete gobbledygook that is this movie’s script, I can’t imagine what acting in it must’ve been like. The cast seems to break down into two camps: Those that utterly buy into this bullshit and those that seem confused by it. The former category includes David Warner, filling the role Malcolm McDowell played in the games, and Tcheky Karyo, as the heroes’ mentor. There’s also Saffron Burrows as Priest’s love interest, who commits a little too hard to playing a stiff hard-ass. In the second category is most of the film’s young leads. Freddie Prinze Jr.’s clear inability to understand things translates to a flat performance. Matthew Lillard, also clearly baffled, degrades into hammy mugging. His love scene with Ginny Holder is among the most ingenuine and uncomfortable I’ve ever seen. It’s hard to believe these two young people are into each other when everything that comes out their mouths is stupid sci-fi nonsense.

You’d think a film so deeply steeped in the “Wing Commander” world would at least appeal to hardcore fans of the games. Yet even they seem disappointed in the movie, as apparently it deviates significantly from the established stories. It’s not surprising that such a niche product failed to connect with mainstream audience, the movie only grossing 11 million dollars at the box office. The film seems even more obscure now, as the “Wing Commander” series has totally receded from the public consciousness. There hasn't been a new game since 2007 and not a single soul talks about the franchise anymore. The entire endeavor, and especially this deeply incoherent movie, seems to have become a footnote in gaming history. [3/10]