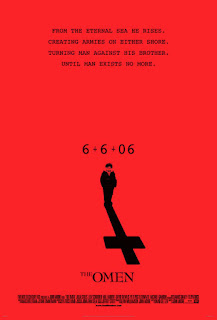 The remake of “The Omen” may be the only movie that was greenlit because of a release date. The remake was rushed into production so that it would be released on June 6, 2006. (That was a Tuesday, by the way.) To be even cuter about it, the film was officially rolled out at 6:06 in the morning. Ha ha. While I love the original “Omen,” I don’t consider it an untouchable classic of the genre. The 1976 film’s themes were based in an older religious context. How would a new version of “The Omen” update these concepts for our more cynical, areligious times? What would an agnostic version of “The Omen” looks like? We’ll never find out because John Moore’s remake was content to more-or-less repeat the original, just with a flashier visual style.

The U.S. Ambassador to Britain gets some bad news. His wife Katherine has given birth to a stillborn son. In hopes of saving his wife’s feelings, Robert Thorn discreetly switches the dead child with a new adoptee. Named Damien, and raised in luxury, the boy appears to be mostly normal. Until his fifth birthday, when a nanny hangs herself in front of the whole party. From there, strange events begin to haunt Robert, his wife, and their son. More unusual deaths follow, all of them unlikely and violent in nature. A clearly unhinged priest gives Robert an eerie warning. Katherine begins to feel strangely about Damien. Soon, Thorn is forced to confront the truth: Damien is Antichristo, the offspring of the Devil, conceived to fulfill the end times prophecies.

One assumes that, if a filmmaker chooses to remake a movie, they have something new or interesting to bring to the material. You’d think that anyway. Yet “The Omen” happily follows the original beat for beat. Thorn’s son dies, the switch is made, the nanny kills herself. A priest warns Robert before being impaled by a lightning rod. A Rottweiler appears, along with a new nanny, and the mom gets worried. The mom’s pregnancy is terminated by an accident Damien perpetrates. Thorn teams up with a photographer, they consult a scarred monk, and explore a cemetery. After the photographer dies, Thorn confirms what Damien truly is. The remake even maintains minor scenes, like Katherine loosing Damien during a day out or the dead priest covering his apartment with Bible pages. The changes that are made are totally trivial. A razor scooter replaces a tricycle. An unconvincing gorilla suit stands in for crazed baboons. “The Omen” isn’t a shot-for-shot remake but it’s practically scene-for-scene. What’s the point?

Only a handful of new elements are added. Vatican scientists take note of Damien’s birth, presenting the Pope with an apocalyptic slideshow. (Tastelessly, real footage of the September 11th attacks and Hurricane Katrina are included.) The final scene coincides with the Pope’s death. These sequences serve no purpose other then adding more ominous qualities to the story. Naturally, the deaths are gorier. The priest is impaled by both a lightning rod and shattered glass. The photographer is decapitated by a spinning sign, his stump spurting blood. Instead of just stabbing Ms. Baylock, Mr. Thorn runs her over with his car, her body spinning into the air. The most senseless addition is arty nightmare scenes, each climaxing with cheap jump scares. The Thorn parents have nightmares that feature dead fetuses, hooded occultists, and pristine white rooms. Maybe the director thought the audiences wouldn’t understand how worried the characters were otherwise? Because we’re, you know, stupid.

As much as I hate the entirely unnecessary nightmare sequences, that’s not what annoys me the most about the 2006 “Omen.” Richard Donner made sure to ground the original “Omen” in reality, making even the most outrageous moments seem possible. The remake goes far in the other direction. Each shot is calibrated for maximum flashiness. Actors are often centered in the middle of the frame. All the colors are muted but exaggerated. Color tinting and CGI are employed to make individual shots pop as much as possible. If this was used sparingly, it might have added some impact to singular moments. Shooting the entire film this way makes it look as bland as a car commercial. Considering John Moore would later direct the visually flat “A Good Day to Die Hard,” I blaming cinematographer Jonathan Sela for this overindulgence of style.

The cast doesn’t brings anything to 2006’s “Omen” either. Julia Stiles is hopelessly miscast as Katherine. I loved Stiles as a snarky teenager in “10 Things I Hate About You” but she’s overly mannered and unconvincing as the traumatized, concerned mother. Liev Schriver takes the material seriously but there’s a notable lack of emotion in his delivery. David Thewlis flat-out impersonates David Warner, which is a further indication of how beholden the remake is to the original. The worst miscasting befalls little Damien. Harvey Stephens – who cameos here, by the way – seemed like a normal child, which made his creepy attributes more startling. Seamus Davey-Fitzpatrick, meanwhile, glares ominously with a set of bags under his eyes worthy of a goth teenager, being as obviously creepy as possible. Not even Pete Postlethwaite, usually reliable to give a memorable performance, is allowed to do much as the paranoid priest.

All right, Mia Farrow is pretty good as Ms. Baylock. She’s seemingly the only person in the film who understands subtly. She acts like a perfectly charming, sweet old woman until cutting loose at the very end. I wish that was a memo everyone else who worked on the remake got. 2006’s “The Omen” slavishly follows the original while totally missing the point of the original’s presentation. It lacks scares, a delicate touch, and a reason for existing. And that’s what you get when you make a movie just to take advantage of a release date. [3/10]
Posted by Bonehead XL at 6:06 PM