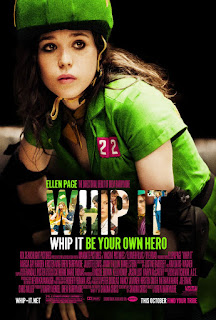 The year was 2009 and I had a huge movie star crush on Ellen Page. No, the rumors that she was gay – and the eventual confirmation of those rumors – did not dissuade me. I was going through kind of a weird time myself, having a miserable experience in college. I had few friends and my girlfriend had just dumped me. When I saw “Whip It,” at a weekday evening show during its first week of release, I was the only person in the theater. In the lobby, the theater was giving away various freebies, including smaller versions of the film’s poster. That poster hung in my dorm room for a long time, more so because of my fascination with Miss Page and less because of the movie’s quality. Which isn’t to say “Whip It” is bad. It’s actually quite good. It’s also, as of this writing, the only directorial credit of actress Drew Barrymore.

Bliss Cavender is a seventeen year old living in the small town of Bodine, Texas. Despite her obvious disinterest, Bliss’ mom forces her to participate in beauty pageants. Bliss has few friends, aside from her co-workers at her waitress job. On a whim, she travels to a roller derby match in near-by Austin. Bliss is immediately smitten with the sport and soon tries out. After making the team, the Hurl Scouts, Bliss becomes the rookie of the year. All the while, she keeps her enthusiasm for the game a secret from her parents, who are no wiser. Eventually, that secret – and the boyfriend she gains at the same time – are going to have to come out.

Plot wise, there’s very little that’s special about “Whip It.” The film is a hybrid of the inspirational sports story and coming-of-age drama. The screenplay does not defy the clichés of either genre. There’s the underdog team, which rises to the championship with the help of the plucky new recruit. There’s the bitter, mean-spirited rivals and the eccentric teammates. There’s also the protagonist struggling against her parents, searching for herself, falling in love, making mistakes, and eventually realizing mom and dad aren’t so bad. Despite sticking to a routine outline, “Whip It” is still a very entertaining film.

That’s mostly because the movie maintains a freewheeling sense of fun throughout its entire run time. “Whip It” is not entirely glib but something fun or charming is usually happening on-screen. The dialogue is fast-paced and funny. When trying to get a drunk friend to throw up, Ellen tells her to imagine her parents having sex. Scenes of the characters just hanging out, chatting and joking around, are enormously amusing. The characters are extremely memorable. Even the smaller parts are filled out with individualizing quarks and gestures. Though nearly two hours long, “Whip It” moves at a steady pace, staying light-hearted and fun.

The phenomenally talented cast is another reason why “Whip It” is so charming. Ellen Page does not play typical teen heroines and Bliss Cavender is no different. The character is introduced dying her hair neon blue before a pageant, much to her mother’s consternation. Bliss’ style is described as “alternative,” which isn’t wrong. She wears thick glasses, ironic metal shirts, loves punk rock, and has an off-beat sense of humor. In comedies, Page has the ability to harness a natural awkward energy to generate lots of laughs. It would’ve been easy to play Bliss as a typical indie comedy protagonist, all quirks and no soul. Page, however, has an incredible humanity, putting so much thought into every move and decision. Ellen’s girl-next-door charm also goes a long way towards making Bliss seem like a real person.

In coming-of-age stories, it’s not uncommon for parents to be portrayed as totally clueless, even hateful, before finally coming around to their child’s way of thinking by the end. “Whip It” looks like its going in this direction. Marcia Gay Harden’s Brooke seemingly has little interest in understanding her daughter. A thoughtful parent probably would’ve realized that her daughter had no interest in beauty pageants long before Brooke did. Yet “Whip It” resists making Mom a bad guy. When Bliss reconciles with mom, it’s earned, the mother being portrayed as right about some things, wrong about others. It’s also nice that Harden isn’t immediately won over by her daughter’s sports performance. Even at the end, she’s a bit uncertain. I also really like Daniel Stern as the slightly goofy, sports-obsessed dad. Mom and dad clearly still have a passionate, physical relationship, which is a nice touch when so many movies portray parents as practically asexual.

Bliss’ best friend is Pash, played by Alia Shawkat. Shawkat and Page are friends in real life and that chemistry obviously carries over to their characters. The two often giggle like the mischievous teen girls they are. By the same accord, this isn’t played in a reductive manner. Instead, the two seem to be amusing themselves with genuine in-jokes. Much like Page, Shawkat has a unique screen presence of her own. Just the way she scowls or crinkles her forehead can produce a laugh. I also like Carlo Alban as Birdman, Ellen and Alia’s coworker and friend, who harbors a crush on Shawkat. When he finds out the romantic interest isn’t quite unrequited, his response is quite amusing.

Of course, Bliss’ kinship with her roller derby team is maybe the most important relationship in the film. Drew Barrymore assembles an excellent gathering of actors for this ensemble. Among them is herself. Barrymore plays Smashley Simpson, the primary muscle of the team, who has no problem smashing opposing players in the face. For that matter, it seems to be her primary strategy. This high-energy, rough-and-tumble part is extremely well suited to Barrymore’s talents. While Zoe Bell and Eve’s parts are fairly undefined, both actresses bring their considerable talents to the roles, making small roles memorable. As team couch Razor, Andrew Wilson amusingly vacillates between frustrated, with his team’s seeming incompetence, and pride, over their actual abilities. Kristen Wigg plays Maggie, the player who bonds most closely with Bliss. Wigg is parental, providing life advice to Page, but still funny, maintaining a personable edge even during the film’s slowest moments.

Befitting the sports setting, the Hurl Scouts are naturally opposed by a rival roller derby team. The Holy Rollers are led by Iron Maven, played by Juliette Lewis. Most of the film characterizes Maven as a bitter, typical sports movie bad guy. She tosses Bliss into a hot tub at an after-party and starts a food fight in a coffee shop. Naturally, her behavior in the rink is brutal, slamming and elbowing the other players. Yet “Whip It” still takes the time to add a little more depth to Lewis’ character. During a one-on-one with Bliss, Maven reveals that she spent most of her life aimless, not developing a passion for roller derby until recently. In a sports cliché at least as old as “Rocky,” the heroes go the distance without winning the championship. Displaying its continued commitment to humanity, Maven and Bliss share a grounding moment after the rival team wins.

Despite being a first time director, Barrymore has no problem capturing a fast-paced sense of action throughout the derby sequences in “Whip It.” The rules of roller derby are clearly displayed and understood, without bogging the film down in too much exposition. The audience grasps how the game works after the first sequence. The derby games are fun to watch, the camera keeping up with the speedy movements of the players. The blows against the guardrail or with fists hit with the appropriate level of force. It’s surprising that roller derby hasn’t made it into more films. The movement of the sport, the weaving in and out of crowds of players, is inherently cinematic. “Whip It” captures this well.

If there’s anything about the film that doesn’t immediately charm me, it’s the required love story. Bliss quite literally bumps into her love interest, rock singer Oliver. Oliver is played by Landon Pigg, a ridiculously named real singer of some note. From the moment we meet Oliver, we know he’s going to break Bliss’ heart somehow. Pigg’s not bad in the part and he shares some decent chemistry with Page. The scenes devoting to the two’s relationship, which include loosing keys in a corn field or playing pinball, are amiable. The inevitable love scene between the two, meanwhile, is rather overwrought. The two teens mingle underwater in a pool, which seems like an awfully inconvenient way to loose your virginity. Yes, Oliver does screw around on Bliss, confirming the audience’s natural instinct not to like him.

That heartbreak leads to the most routine part of “Whip It.” It’s the standard end of the second act shenanigans. Mom and Dad find out that Bliss has been deceiving them, forcing a schism between the characters. The Hurl Scouts discover Bliss is only 17, making her technically too young to play. Pash gets pissed at Bliss, forcing a separation between the close friends. The reveal that Oliver is a cheating piece of shit is the last blow for Bliss, which makes her realize she needs to get her life back together. “Whip It” is too laid back to ever lurched towards contrived melodrama. But it comes dangerously close during these scenes. The film defuses these tensions in a smart way. Bliss refuses to play Oliver’s shitty games. Pash, Dad, and the Scouts happily accept her back.

“Whip It” also has an awesome soundtrack, featuring some driving rock music from Peaches, MGMT, the Breeders, and the Ravonettes. The film’s effervescent charm was recognized by many critics, who admitted to liking it in spirit of the predictable screenplay. That, however, didn’t translate to box office and the film just barely broke even worldwide. Maybe that’s why Barrymore has yet to direct another film. Or maybe it’s an example of an actor directing a film and finding it isn’t for them, a pattern we’ll see in future No Encores reviews. “Whip It” isn’t a classic but the work of Page and the rest of the cast, along with a healthy amount of heart, makes the film highly agreeable nevertheless. Now I need to see if I still have that poster somewhere… [7/10]
Posted by Bonehead XL at 7:28 PM