Though he’s most associated with the action movie thrills of the “Lethal Weapon” and “Superman” franchises, Richard Donner has worked in comedy many times over the years. Many of his earliest TV credits circled laughs while both “Salt and Pepper” and “Twinky” largely fell within the genre. “The Toy” was Donner’s first genuine comedy hit, becoming the fourteenth highest grossing film of 1982. Despite its commercial success, the film was not well regarded critically. In the intervening decades, “The Toy” has become even more embarrassing, an excruciating exercise in cultural insensitivity and hacky as hell comedy.

Jack Brown is a struggling journalist and writer, with few dollars to his name. With money running low, his childhood home is threatened with being sold. Desperate for work, he takes a job as a maid for U.S. Bates, a local millionaire. After embarrassing the magnet, he gets fired, winding up in a toy store. Bates’ nine year old son Eric, however, is amused by Jacks’ antics. He demands to “buy” the man, owning him as a toy, a friend that will accompany him and put up with all his bullshit. Jack is reluctant at first, and repeatedly resists, but the money keeps him coming back. Inevitably, he soon develops a real friendship with the bratty kid.

“The Toy” is a remake of the 1976 French film, “Le jouet.” In the original, the man purchased to be the rich brat’s toy was white. The remake casts Richard Pryor – a black man, you might notice – as the titular human plaything. That means “The Toy” is a movie about a rich white child purchasing a black man, who is then repeatedly abused. Occasionally, “The Toy” communicates with its blatantly offensive premise. During the initial purchase scene, a Confederate flag is visible in the background. Jack occasionally comments on the similarities between his current gig and slavery, as do a few supporting characters. Otherwise, “The Toy” has a blatantly racist premise that it barely approaches without irony, satire, or self-awareness. 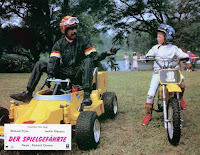 “Barely,” I said. Pryor’s character is a journalist. Eventually, this factoid re-enters the story. He starts a newspaper with the little boy. Their investigation reveals that Eric’s dad happily rubs shoulders with members of the Klu Klux Klan. A big scene in the film’s second half has the adult and child heroes disrupting a discreet Klan fundraiser U.S. Bates has organized. (The scene eventually descends into a pie fight.) This attempts to comment on the movie’s wider theme, about how the rich abuse the poor. Instead of organically commenting on the obvious racist themes in the film, “The Toy” awkwardly fuses a subplot about this aspect into the ridiculousness of the rest of the movie. This entire subplot feels so at odds with the rest of the movie that I wonder if it was the result of re-shoots.

Yet “The Toy’s” offensive premise and clumsy handling of it isn’t even the film’s biggest problem. Instead, the movie is an extremely lazy comedy. “The Toy” always goes for the easiest jokes possible. Set-ups are seen a mile away. After entering U.S. Bates’ office, the millionaire shows Jack an intricate domino set-up. Of course, Jack soon knocks it over. The movie is so satisfied with this gag, it’s repeated. The last name of “Bates” inevitably leads to a gag about “Master Bates.” Eric’s tutor speaks with a German accent. Soon, she’s revealed as a secret Nazi, a joke that’s barely coherent. A platonic declaration of love between two men is immediately misunderstood. “The Toy” is shameless about this. A gay fitness instructor and Pryor in drag are two gags deployed in the film’s first half-hour. “Dire” doesn’t truly do it justice.

When “The Toy” isn’t pitching painfully obvious and protracted gags at the audience, it’s engaging in shrill and obnoxious comedy. At least twice, Richard Pryor has slop poured on his head. One bizarre sequence has Pryor wandering into a river populated with piranhas. He escapes this situation by running across the waters like a cartoon character. He boxes with a toy robot. Yes, there’s a fart joke, though there’s thankfully only one. The broad humor and child-focused premise makes “The Toy” look like a kids’ flick. Yet “The Toy” also features gags about fake breasts and erections. The little boy ogles a nude painting in one scene while tearing a woman’s skirt off in another. There’s an incredibly uncomfortable scene were Jack gives Eric the Talk. Who is this movie for?

In the movie, Richard Pryor’s character only takes a humiliating job because of how much money he’s being paid. This eerily mirrors real life, as Pryor only starred in “The Toy” because of the paycheck. His stand-up was electrifying and hugely influential. However, Pryor rarely found movies worthy of his abilities. In “The Toy,” he mugs furiously, trying to do something with the shitty material. This usually results in Pryor shouting his way through dire scenes of physical comedy. Such as when he spins through an inflating toy wheel or drives a go-cart through a dinner party. During the emotional scenes, Pryor’s utter lack of interest in the material become all too apparent. It’s clear he didn’t give a shit about this piece of shit and I can’t blame him.

Co-starring along side Pryor is Scott Schwartz, in his feature film debut. Schwartz’ character is so obnoxious, so despicable, that he is nothing but repugnant for the viewer. Little Eric Bates is an intolerable asshole. In addition to dumping shit on Pryor’s head, he destroys his fancy meals twice, treats the family butler like garbage, and has a total disregard for all the expensive things around him. Schwartz is not much of an actor either, as his line readings are usually flat and monotone. (With this in mind, his future career in porn is less shocking.) When asked to be anything besides the most annoying child character I’ve ever seen in a movie, Schwartz is deeply unconvincing. You don’t want to see Eric Bates be redeemed in “The Toy.” You want to see him get tossed off a cliff.

Alas, sticking one of the greatest stand-up comics of all time in a deeply pedestrian and borderline racist comedy is not “The Toy’s” only crime. Instead, “The Toy” becomes most insulting when it attempts to play Jack and Eric’s relationship for pathos. Yes, inevitably, Jack somehow develops an emotional attachment to this hateful little son of the bitch. He hugs him, playing with him in a supposedly cute way. “The Toy” repeatedly references that Eric is so obnoxious because he needs a friend and a proper father figure. Of course, Jack provides just these things for Eric. Who gives a shit? After being so obnoxious and unlikable, “The Toy’s” utter contempt for the viewer truly surfaces when it asks us to care about this nonsense. 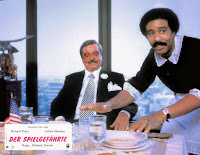 The third major star of “The Toy” is Jackie Gleason. Though probably less important then Pryor, Gleason’s own comedic legacy is weighty. But by the time “The Toy” rolled around, he was mostly known for slumming his way through the “Smokey and the Bandit” series. Despite being far too old to play a nine year old’s father, Gleason was cast nevertheless. Gleason’s performance is comparable to his work in “Smokey.” He blusters, yells, and mugs in incredibly broad, silly ways. The script is the greatest disservice to Gleason’s ability. Like his son, U.S. Bates is a hateful, racist, despicable piece of shit. Despite being a deeply terrible human being, “The Toy” still sticks Gleason with a redemption arc, asking us to relate to and like this asshole.

Aside from its leading men, “The Toy” tricked a few other talented performers into appearing in it. Ned Beatty, returning from Donner’s “Superman,” plays Mr. Morehouse, Bates’ primary corporate stooge. Beatty embarrasses himself too, being asked to strip, give canned reactions to horrible gags, and getting sloppy drunk. Beatty, however, has no ego as an actor. He doesn’t manage to save the movie but his scenes at least don’t make you feel bad for all involved. Also appearing in the film is Wilfrid Hyde-White as Barkley, the family butler. Hyde-White gets one of the film’s few funny moments, when he delivers a rambling response to a simple question. Teresa Ganzel, as Gleeson’s trophy wife, is willing to play along with the material. She doesn’t get any proper jokes but her delivery is solid and her cleavage is fantastic.

So is there anything worth recommending about “The Toy?” There’s a handful of chuckles in the movie, the thinnest wisps of actual amusement fluttering across the watcher’s face. Most of these come from Pryor’s nonchalant delivery. Brief lines about “ghetto hockey” or on-going debates with stuffed orangutans got a small laugh out of me. The only honest-to-god joke in the film that got me to laugh was when a helicopter confronts Jack and Eric. The black man responds calmly to the vehicle’s appearance, forcing the overly serious pilot to repeat his answer in a dead-pan manner. That’s it. One single funny line in 104 minutes of nonsense.

Okay, “The Toy” also features a mildly funky, listenable soundtrack. Aside from that, it’s terrible. I don’t know what Richard Donner saw in the material but his direction is frequently cartoonish, often employing fast motion photography. The film features one of the most uninspiring sequel hooks I’ve seen in a while. Despite “The Toy” being a success, the universe thankfully did not bless us with “The Toy 2.” The script is hacky, obvious, and terribly lame. The tone whiplashes between obnoxiously childish and snickeringly naughty. Most of the characters are terrible. The ones that aren’t are played by actors who don’t give a shit. The racial subtext of the movie is frankly baffling. The movie’s meager redeeming qualities technically makes it applicable for a D- grade but, fuck it, this piece of shit gets an F. [Grade: F]
Posted by Bonehead XL at 7:09 PM