I’m going to build a narrative around “Inside Moves” that I have absolutely no evidence to support. But here’s my theory. After “The Omen” and “Superman,” Richard Donner had directed two huge blockbusters in a row. Though he had filmed nearly half of “Superman II,” a bad relationship with the producers had him exiting that movie before completion. I suspect, after a superhero spectacle of that level, Donner wanted to come back down to Earth. “Inside Moves,” a character based drama, was released in 1982. It received little attention from audiences or critics. Despite earning an Oscar nomination for Diana Scarwid, the film has been all but forgotten.

Despondent with his life, Roary tosses himself from the window of his apartment building. He survives the suicide attempt but is left with a permanently damaged leg and spine. While recovering, Roary wanders into a bar called Max’s. There, he quickly makes friends with a group of handicapped men. He especially bonds with Jerry, the bartender. Jerry dreams of becoming a professional basketball player and has the skills to back that aspiration up. However, a debilitating leg injury keeps Jerry behind the counter. Following a surgery, Jerry regains his ability to play ball and quickly goes pro. Roary soon finds love with a waitress, Louise. However, their troubles are far from over.

We don’t learn why Roary attempted suicide until late in the film. It’s not until then that he reveals his reason: He was tired of living, feeling an undefined dissatisfaction with life. When he stumbles into Max’s, he’s in search of a new beginning. Soon, he makes a new group of loyal friends. They don’t flinch when they learn why he jumped out a building. They forgive, forget, and accept. Jerry is similarly looking for a new start, hoping to fulfill his dream of sports stardom. Midway through the film, he does reach that goal. Yet a further mistakes has him returning to his friends, in search of forgiveness. This is what defines the story of “Inside Moves,” a desire to be forgiven and to forgive in turn.

“Inside Moves” can be a surprisingly cozy watch. When Roary first enters Max’s, he notices the trio of guys playing cards. Each one has a handicap. Wings is a double amputee, primitive hook pincers on each wrist. Stinky is blind. Blue Lewis is confined to a wheelchair. Each one has a disability but approach their conditions with humor and acceptance, having long learned to live with them. As Max’s is threatened with closing down, following Max himself having a heart attack, Roary and Jerry buy the bar and continue to run it. Because it’s about more then just a place to hang out and drink a few beers. They’re family. The sense of camaraderie between the characters is the greatest joy of “Inside Moves.”

Busy character actor John Savage stars as Roary. Though with notable starring parts in “Hair,” “The Onion Field,” and “The Deer Hunter” on his resume, Savage was hardly a marquee name in 1980. Maybe that’s why “Inside Moves” disappeared at the box office. As Roary, Savage underplays it. The actor commits fully to the character’s posture. Never once is he seen moving without the limp or lean. He rarely raises his voice. Instead, Savage’s composure is someone who spends a lot of time in his own thoughts. His words are chosen carefully. He’s patient, thoughtful, and self-deprecating. It’s not a showy performance but is strong, sturdy, and powerful.

David Morse plays Jerry, the second lead of “Inside Moves.” When Jerry first appears, he’s an open fellow, happily inviting Roary back to the bar. As Roary gets to know Jerry better, it’s apparent that the guy is too generous. His girlfriend, Anne, is a drug addict who works as a prostitute. She takes advantage of Jerry’s generosity, stealing from him. Later, her pimp brutally beats the guy. However, as Jerry comes closer to achieving his dream, he reveals a selfish side of his own. It’s a multilayered part and David Morse is up to the challenge. His naturalistic acting makes Jerry seem like a real, complicated person. 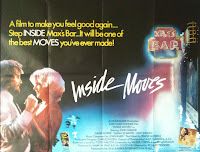 “Inside Moves” is also, unexpectedly, a sports movie. Not long after striking up a friendship with Roary, Jerry drags him to a basketball game. Jerry is passionate about the sport becomes of his own skill set at the game. His own chances at sports stardom were dashed because of his bum knee. Even with this condition, Jerry nearly plays one of the pros to a standstill. The setbacks of life has Jerry abandoning his dream. Yet his friends don’t give up on him, even getting the same professional player to give him a pep talk. Listen, I don’t care about basketball. And “Inside Moves” isn’t really about basketball either. Instead, Jerry’s aspirations are the kind of hard to achieve but achingly close to the ground dreams every one has.

Eventually, “Inside Moves” develops into a love story. After turning Max’s into a successful business, Jerry and Roary have to hire some additional help. This is how he meets Louise, as played by Diana Scarwid. The romance progresses slowly, naturally. The sweetest scene between them occurs during a Christmas party, when the two dance under the mistletoe. Louise’s friendship with Roary means so much to her that she’s reluctant to pursue romance. For a while, their romance is strictly unrequited on both ends. When the two eventually come together, it’s a sweet moment the film earns. Scarwid is very good in the part, as patient and natural as the material needs. Her nomination was well earned though I wonder why she was singled out among the excellent cast.

In its last third, “Inside Moves” makes a few false steps. A love triangle forms between Roary, Jerry, and Louise. It’s a story move that comes out of nowhere. There’s no chemistry between Scarwid and Morse, as opposed to the sparks she shares with Savage. Notably, the entire affair takes place off-screen, other characters just talking about it. As a slow story with realistic, life-like stakes, it seems “Inside Moves” wanted to ratchet up the tension a bit near the end. It’s the only big problem I have with a film that, otherwise, is touching in its realism.

Helping support the excellent set of leads is a fine ensemble cast. The trio of guys at Max’s provides “Inside Moves” with most of its humor. Letting the blind Stinky direct the paraplegic Blue Louis’ wheelchair across the street nearly gets them hit by a car. In another scene, Louis reads Stinky a sleazy romance novel. Each actor is well cast. Harold Russell, the real life double amputee that won an Oscar for “The Best Years of Our Lives,” plays Wings. Russell’s good-natured humor enlivens what could’ve been a bit part. Bert Remsen plays Stinky, also gifting the part with a lot of humor. He has an excellent back-and-forth with Bill Henderson’s Blue Louise. The jokes among these characters keeps “Inside Moves’” tone from getting too heavy.

Ultimately, the film reveals itself as a story about the healing power of friendship. Jerry makes mistakes, the kind of mistakes that could ruin even the closest relationships. Roary and the gang forgive him, welcoming him back into their circle. It’s not a decision made lightly. But seeing Jerry achieve his dreams is more important to the group then letting hurt hold them back. They’re family, after all. “Inside Moves” makes powerful statements like this without overdoing it. Instead, it approaches weighty themes in a subtle, soft, considered manner.

Music has played such a large role in the success of Richard Donner’s previous two films. “Inside Out” is a much smaller story then “The Omen” or “Superman.” However, it’s music is quite good as well. John Barry’s score is blues influenced. Scenes set in Max’s bar are often accompanied by a boozy harmonica, lowly blowing horns, and a rambling piano beat. Eventually, the music builds to a likable pace, suggesting the bar’s friendly, familiar atmosphere. Roary and Louise’ love theme utilizes a softer brass section and a gentle piano backing.

“Inside Moves” remains a departure for Richard Donner, who would mostly continue to specialize in crowd pleasing action films and comedies from this point on. The movie wasn’t available on DVD for years, undoubtedly adding to its obscure status. Yet “Inside Moves” is well worth seeking out. It’s a low key character drama, beautifully acted and concerned with every day challenges. Though I never would’ve expected Donner to make a thoughtful drama like this, how good “Inside Moves” is makes me wish he tackled the genre more often. [Grade: A-]
Posted by Bonehead XL at 11:45 PM