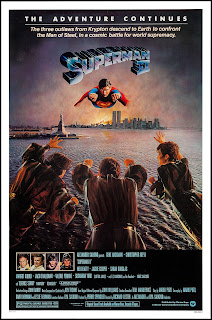 “Superman” and “Superman II” were to be shot simultaneously. This was the plan anyway. However, as production ran on and the budget soared, Richard Donner made the decision to focus on finishing the first movie. If “Superman” bombed, no one would want to see the sequel anyway, right? By this point, Donner had already shot most of part two. After the original was a success, production resumed on the sequel. But without Richard Donner. The director’s relationship with the producers was so toxic, he wasn’t invited back to finish the movie he started. Richard Lester, who previously made “The Three Musketeers” and “The Four Musketeers” for the Salkinds, finished the movie. When “Superman II” flew into theaters in 1980, Lester received the sole directorial credit. Years later, Donner was given the chance to cut together his version of “Superman II.” This allows the rare oppretunity to review two different versions of the same movie.

The seeds for “Superman II” were planted in the original. General Zod and his followers, Ursa and Non, were imprisoned by Jor-El and the Kryptonian council for the act of treason. Trapped in the Phantom Zone before the planet’s destruction, their inter-dimensional jail cell was sent flying through the cosmos. A stray nuclear missile – whose origin varies depending on which version you’re watching – collides with the villains’ prison. Freed, the trio heads towards Earth, the yellow rays of our sun gifting them with the same powers as Superman. Zod quickly begins to conquer Earth. Meanwhile, Lois Lane discovers that Clark Kent is Superman, causing their relationship to heat up. That love affair puts Superman, and the world, at risk when Zod inevitably seeks out the son of the man who condemned him.

Gene Hackman was entertaining as Lex Luthor in the first “Superman.” However, his scenes were easily some of the weakest in the film. “Superman II” provides a stronger trio of villains for Superman to stand against. The Phantom Zone criminals provide a physical threat to the superhero. Luthor may be able to scheme a mighty plot but he can’t toss a bus through a building. Moreover, General Zod is wildly entertaining to watch. Terence Stamp’s authoritative voice makes an impression, as does his articulated delivery. The sadistic conqueror who quickly grows bored of victory allows Stamp to ham it up to gloriously entertaining heights. Sarah Douglas is also highly amusing as Ursa. She coolly executes her enemies, collecting trophies from her opponents. There’s a sly humor and an effortless sexiness to Douglas’ performance. Meanwhile, Jack O’Halloran certainly looks the part of Non. In Donner’s cut, he shows an intimidating physicality.

Richard Donner actively resisted the campy nature “Superman’s” producers expected, deciding to play the film as straight as possible. Richard Lester does not have the same inclination. Lester’s cut of “Superman II” is full of cornball humor. While on assignment in Niagara Falls, Clark Kent and Lois Lane stay in a ridiculous hotel room, which includes a bright pink bear skin rug and a vibrating bed. After arriving on Earth, Zod and his henchmen get into all sorts of shenanigans. The redneck police officers and fisherman react in typically broad fashions. Ursa cooks a snake with her heat vision, which Non attempts to chew on. Later, she arm-wrestles a yokel, tossing him through a table. They comically deface Mt. Rushmore. During the battle of Metropolis, the villains use their super-breath to blow ice cream cones into faces or phone booths over. Lester also seems to follow the Silver Age “New Powers as the Plot Demands Them” rule, as Superman and his opponents display previously unheard of abilities. Such as Super Cellophane or shooting telekinetic rays from their hands. 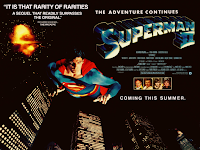 For all its campy excesses, even Richard Lester’s cut of “Superman II” features some entertaining action. Superman’s fight with Zod and his henchman has some impressive gags. A clever moment has Superman reflecting Zod’s heat vision back at him, the billboard behind the villain scorched. Superman tosses Non through a building or gets clothesline with a tossed man lid cover. Non and Superman disappear under the street, with the struggle being heard but unseen. Even distracting product placement from Coca-Cola, Marlboro, and KFC can’t sidetrack from the action factor. Donner’s cut of the film adds to the fight. Such as the villains ambushing Superman in the air, throwing him through the Statue of Liberty’s torch. Donner’s cut also patches up some of the shaky special effects seen in the theatrical version.

Both cuts of the film have a problem though. The evil Kryptonians wreck havoc for as long as they do because Superman is busy getting laid. Lois Lane not realizing Superman and Clark Kent are the same person has been a hacky pop culture punchline for decades. The movies recognize this problem. Lois figures it out in part two, testing Clark in various ways. The screenwriters realize that the relationship couldn’t progress without the truth coming out. The romance presents a new challenge for Superman: He has to choose between his love for Lois and his status as a hero. As charming as Margot Kidder and Christopher Reeves are together, the romance doesn’t seem so powerful that Clark would give up his powers for her. Mostly, it’s a script construction, raising the stakes for the hero. It also has the unfortunate side affect of weakening Kidder’s character, turning her from an active story member into an endangered love interest.

Both versions of the film suffer from a few of the same problems. Some of the returning cast gets shorted. Lex Luthor is back, escaping from the prison in an early scene. (Thankfully, this is the only scene Otis appears in too.) However, with Zod and his goons causing chaos, Luthor’s role can’t help but be diminished. He essentially functions as a plot device. He brings Zod to Metropolis, leading to the big fight in the middle of the film. Later, he leads the Kryptionians to the Fortress of Solitude. Though Hackman has some fun with the dialogue, such a strong villain being reduced to a lackey is disappointing. Jimmy Olsen and Perry White have tiny roles in both cuts. Ma Kent isn’t anywhere in either version. There’s a lot going on in the film, so this can be forgiven. But it’s still disappointing.

Even with these flaws, “The Richard Donner Cut” is generally superior. It is better paced, running twelve minutes shorter then the original cut. Most pressingly, Donner’s original vision clears up a major plot hole in Lester’s cut. In both cuts, after Superman willing gives up his powers, he realizes he’s defenseless against Zod. He journeys back to the Fortress of Solitude and discovers the green glowing crystal that built the place. And then, a few scenes later, he reappears with his power. So what exactly happened? Donner’s version clarifies this. The crystal activates one last hologram of Jor-El. Anticipating his son’s mistake, dear ol’ dad built in a last resort for such a situation. Clark regains his abilities but at the cost of loosing his father’s guidance, once and for all. It fills in a long wondered about blank and adds further emotional stock to the story.

Further benefiting the movie, Donner’s release excises most of Lester’s goofy humor. The humorous reaction shots, cornball civilians, and the bright pink bear skin rug are nowhere to be seen. Most of Non’s clownish antics are also removed. The Richard Donner Cut also features a stronger sound mix, better utilizing John Williams’ score. I can’t approve of all the changes made. The baffling final scene of Clark returning to the diner to brutalize a bully is maintained in both cuts. Superman wiping Lois’ memory with a kiss might have been a random decision. Yet it’s a little more elegant then him reversing time by flying around the Earth again. It’s a marginal improvement, instead of a massive one. Yet there’s still something to be said for that.

Both versions of “Superman II” are worth seeing. Christopher Reeves is still brilliantly cast. He was and still is the perfect Superman. Both cuts feature some entertaining action. Either version is a satisfying superhero action flick. However, the Donner cut is a little smoother and a lot less dumb. It’s not quite the long lost nerd ark fans hoped for but it’s still an improvement. Either way, the first two “Superman” movies pair together quite nicely. [Superman II: 7/10] [The Richard Donner Cut: 7/10]
Posted by Bonehead XL at 5:45 PM