“Lethal Weapon” was an iconic hit and one of the defining movies of the eighties. “Lethal Weapon 2” was the third highest grossing movie of 1989, during a huge summer that included “Batman” and “Indiana Jones and the Last Crusade.” “Lethal Weapon” was a gold mine franchise now and had to continue. A third Murtaugh and Riggs adventure rolled out in 1992, going on to become the biggest grossing entry in the series. It was exactly the kind of surefire hit Richard Donner needed after “Radio Flyer’s” box office failure. But at this point, the critics and audiences were less unanimous on the film’s quality.

Three years after the last movie, Murtaugh is now a week away from retirement. While interrupting an armored truck robbery, the duo discovers that armor-piercing rounds - cop killer bullets - are now circulating on the streets. The bullets are traced back to Jack Travis, a former cop himself who is now specializing in selling illegal arms and using his construction company as a cover. Teaming up with Riggs’ new love interest and a returning Leo Getz, the gang goes about avenging the death of friends and stopping the villain.

“Lethal Weapon 2” added more gravitas to the action movie formula by incorporating the real world issue of Apartheid. Realizing that worked last time, “Lethal Weapon 3” throws in three real world issues. First is the issue of police corruption. The bad guy is a former cop himself and uses his police privileges to help facilitate his criminal empire. The second issue is the issue of armor piercing bullets and especially their available among the public. This was a hot button topic in the early nineties and provides the main MacGuffin of the plot. However, the biggest real world issue the film tackles is young people being caught in the crossfire. I was a kid in the nineties. I remember the PSAs about gangs, street crime and gun safety. More then once, “Lethal Weapon 3” makes references to “killing babies.” The villain isn’t just a bad guy because he’s selling bullets that can more easily kill cops. He’s a bad guy because his guns are killing kids.

The movie’s stabs at real world relevance feels especially forced-in at times. Not because action movies shouldn’t tackle ideas like this but because “Lethal Weapon 3” is the goofiest of the series thus far. Firstly, Leo Getz is back with an even bigger role. He acts more like your typical Joe Pesci character this time, going on more then one profane tirade. Getz was decently well used in part two but definitely takes up too much screen time. Watching him squirm on the hockey rink or deal with the aftermath of a proctology exam aren’t not exactly welcomed additions. (The character was apparently a last minute addition to the script, which is obvious.) There are other goofy, broad gags. Murtaugh attracts the attention of a portly female officer, an affection he doesn’t return and actively scorns. Riggs, meanwhile, does things like accidentally interrupt a movie shoot. The humor in this series has never been exactly cutting edge but this stuff seems awfully silly.

But the movie is still funny, at times. The opening skit has the two guys accidentally setting off a bomb they were sent to deactivate. As ridiculous at it is, this provides a decent chuckle or two. A reoccurring gag throughout the movie has Riggs attempting to quit smoking. He substitutes his cigarettes with dog biscuits. This pays off in a sequence where he befriends a vicious guard dog with the same biscuits, the dog following him home and becoming a pet. And if nothing else, the banter between Mel Gibson and Danny Glover remains strong. That counts a lot.

The eighties were over and with them the eighties style of ridiculous, hyper-campy, overly macho action movie were slowly going out of vogue. But in 1992, “Lethal Weapon 3” was keeping the gay subtext alive. Riggs and Murtaugh’s bro-mance remains epic. After shooting a perp the same age as his son, Murtaugh has a miniature breakdown, getting drunk on his boat. It’s not his wife that goes to solace him, it’s Riggs. The conversation escalates into a lover’s spat that concludes with Murtaugh admitting he loves Riggs. When Riggs says he’s attracted to a woman, Murtaugh punches him overboard. (Ostensibly, Murtaugh punches him because he thinks his best friend is sleeping with his daughter. But we all know the truth.) Before the movie is over, Danny Glover is even on his knees before Mel, holding a bouquet of flowers. “Lethal Weapon 3” reestablishes that the only thing these guy love more then stopping crime is each other. 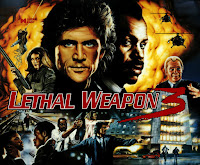 Despite the two guys obviously only having eyes for each other, the movie invents yet another love interest for Gibson. Rene Russo co-stars as Lorna Cole, an internal affairs officer that becomes involved in the case. At first, the two share some belligerent sexual tension, reluctant to admit their mutual attraction. It takes an evening of stripping down and showing off their battle scars for them to admit they like one another. From that point on, Riggs’ main element of character development is his anxiety over dating a fellow officer. Soon, the two are trading cutesy nicknames. The movie ends with them declaring their love for one another. Gibson and Russo have alright romantic chemistry, better then Mel had with any of his previous love interests.

That’s not the problem. The problem is Russo herself. Lorna is set up as tough as her boyfriend. Before the scene where they compare battle scars, she performs a judo flip on Riggs, dropping him on his ass. Russo remains an active member in the action sequences, rushing around and blasting bad guys along with the heroes. This itself is not an issue. The problem begins when the movie starts to push it too far. The extended sequence where Riggs and Murtaugh stand back and watch while Lorna beats up potential leads in a mechanics shop goes on too long and stops the pace dead. It feels less like natural screenwriting and more like the film forcing in some self-indulgent “girl power.” It’s awkward, is what I’m saying.

Another determent towards “Lethal Weapon 3” is its villain. Part one had a psychotic Gary Busey. Part two had a pair of creepy, fascist South Africans. Part three has… A dude in a suit with a mustache. He’s not a physical threat to any of the heroes. Jack Travis is played by Stuart Wilson, an unassuming looking actor. The movie could have used this in the film’s favor. Travis could have been the kind of villain that people purposely underestimate. Instead, the film plays him up as a tough guy gangster who executes snitches and buries traitors in concrete. The character seems like less of an evil mastermind and more like a mean-spirited accountant. He even willfully exposes himself to the cops at one point. He has little cunning, his master plan is not especially brilliant, and he’s not very threatening. Jack Travis is a failure of a movie bad guy.

Travis does provide one worthy contribution to the film: An oppretunity for Danny Glover to go nuts! In no doubt an intentional move, the movie has the more reasonable partner loosing his cool. Murtaugh yanks would-be thugs out of bed and points a machine gun in their face. He holds a guy’s head near the spinning wheels of a revving vehicle. The entire time, Danny Glover’s face is caked with sweat. He gets in people’s faces and screams profanity at them. After two movies of Glover being the more reserved half of this partnership, it is sort of fun to watch him cut loose and act a little crazy for once.

For its many flaws, “Lethal Weapon 3” is still a solid action flick. The cops bust up an armored truck theft just as the vehicle peels out of there, leaving Gibson fighting in the cab of the truck and tossing the driver through a window. A shootout in a subway is dynamic enough, with some fun duel wielding and enough running, gunning, and leaping to make it fun. A freeway chase has Mel diving under a semi-truck and diving off an incomplete bridge, which features a call-back to the dislocated shoulder from the last movie.

The action highlight comes during the finale. The heroes corner Travis at his building project in the desert. It quickly goes up in flames, so now the good guys are fighting among burning buildings. Everyone gets some good shots in. My favorite of which is Murtaugh tossing a claw hammer into someone’s chest. Further proof of how ineffectual a villain Travis is appears during the climax. His Hail Mary move is not a close-quarters fight to the death or a sneaking up and shooting someone. Instead, he jumps in a bulldozer. Woo. Overall though, the fiery climax is probably one of my favorite things in “Lethal Weapon 3.”

It’s not a bad movie. There’s still some blood left in this stone. However, part three is not the most inspired entry in the franchise. Gibson and Glover’s chemistry remains strong and the action’s not bad. But the bad guy is lame, the tone is inconsistent, the humor is not as strong, and some of the new additions to the cast are questionable. What we’re left with is the most uneven “Lethal Weapon” movie yet, one that isn’t terrible but doesn’t match up to either of the previous films. [Grade: C+]
Posted by Bonehead XL at 3:59 PM