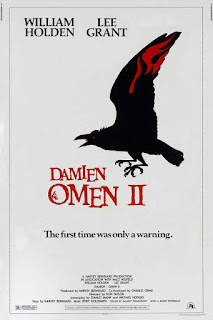 The original “Omen” was made for two million and grossed sixty million. Along with the Antichrist, a franchise had been born. Original director Richard Donner (who was busy with “Superman”) and original writer David Seltzner (who doesn’t do sequels) passed on part two. This didn’t stop 20th Century Fox, as producer Harvey Bernhard wrote the story outline for “Damien: Omen II” himself. Original director Mike Hodge leaving midway through filming didn’t stop the studio either, as actor-turned-director Don Taylor was quickly drafted. Heck, even after “Damien” failed to replicate the success of the original, the series rolled on. Clearly, Fox thought the continuation of “The Omen” franchise was as inevitable as the end of days.

Days after the end of the first “Omen,” Bugenhagen makes an archeological discovery that proves beyond a doubt that Damien Thorn is the Antichrist. This discovery is buried with the old man. Seven years later, Damien is a young teenager, attending a military academy in America. He was adopted by Richard Thorn, Robert’s brother and the owner of a global resources corporation. Neither Richard nor Damien knows the truth but a Satanic conspiracy surrounds the boy. These minions help gurantee the young Antichrist’s rise to power. As Richard slowly learns the truth, and Damien struggles with his destiny, the dead bodies start to pile up.

Unlike many budding horror franchise, which tend to close their stories at the end of part one, “The Omen” had plenty of room for a sequel. Damien, after all, had an entire prophecy built around him and he wasn’t much more then a baby in the first one. The smartest thing an “Omen” sequel could do would make Damien the protagonist and focus on him struggling with his destiny. “Omen II” kind of does that. The boy isn’t aware of his demonic heritage at first, despite occasionally showing flashes of great, evil power. When he reads Revelations and discovers his birthmark, Damien goes running towards the docks, screaming, asking why him. It’s a moment that perversely mirrors similar moments in stories about Jesus. Disappointingly, “Damien” doesn’t follow up on that sequence much. The young Antichrist murders his surrogate brother, in what may be an accident, but this is the only scene that feeds into the conflict. By the end, Damien Thorn has accepted his evil fate, seemingly without thinking about it much.

Despite his name being above the title, Damien actually isn’t the main character of “Omen II.” Instead, the film focuses on Richard Thorn. Sometimes, Richard’s journey can be incredibly dry, such as the subplot concerning a business partner (and secret supporter of Damien) buying up land in third world countries. Richard’s character arc blatantly recalls the events of the first movie. Like his brother, he initially dismisses everyone who tells him his son is the Antichrist. Slowly, suspicion begin to mount. When he discovers definitive proof that Damien is evil, he decides the boy must die. But we, the viewers, already know Damien is the Antichrist. So the story lacks suspense and much of the film is devoted to telling us things we already know and spinning dramatic wheels.

Maybe producer Bernhard figured “more of the same” was the best principal for the sequel. The death scenes in “The Omen” were grisly but managed to stay just within the realm of the plausible. “Damien” disregards that last part. Before the kill, the Antichrist’s victims are often pursued by an ominous black raven. The circumstances of the violence is often overdone. After having her eyes pecked out by the bird, a woman is struck by an eighteen wheeler. She somehow flies up towards the truck’s windshield. An elevator malfunctions, slicing a scientist in half with a fallen wire. A man is somehow caught between two train cars, crushed as they collide. Too often, the victims wander into the story minutes before dying, making it clear that they exist just to up the body count. The sequel also makes it clear that Damien has psychic powers, willing these events to happen, which sometimes borders on silly. The creepiest scenes in “Omen II” are the ones that show the most restraint, such as someone falling through a frozen lake’s thin ice, being caught by the current and carried away.

Probably the best thing about “Damien” is its cast. After passing on the first film, William Holden made sure not to miss the sequels. Like Gregory Peck, Holden was a consummate professional. He takes the part of Richard Thorn seriously, mining some decent emotional from the part of the conflicted father. Lee Grant, apparently a big fan of the original, plays Damien’s step-mother. As a caring family figure for the Antichrist, she’s effective. When she cuts loose at the end, revealing herself as a Satanist, she’s highly entertaining. As Damien, Jonathan Scott-Taylor has an uphill battle facing him. He has to be both pure evil and a normal teenage boy. Surprisingly, Scott-Taylor is usually successful. He inhabits the confusion and conflict of the character while also utilizing a creepy stare. Lance Henriksen also appears, as one of Damien’s teacher and a Satanist, his gravelly voice and sense of sinister authority being used very well. 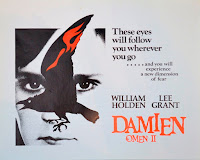 Despite its narrative problems, “Damien: Omen II’ isn’t a terrible flick. The story is sometimes senseless but the pacing moves along just fine. The producers recruited Jerry Goldsmith before anyone else, realizing his music was a pivotal part of the original. Goldsmith’s score for the sequel introduces more motifs, more electronic disturbances, different chants, and Ennio Morricone style croaks and noises. The sequel is most disappointing because it squanders so much potential and freely imitates the first film. Yet a half-ass copy of a fine original still produces a decent movie. If you need a devil flick and can’t access anything else, “Damien” will probably scratch that itch. [6/10]
Posted by Bonehead XL at 7:22 PM