WHY DO I OWN THIS?: Beauty and the Beast: The Enchanted Christmas (1997) 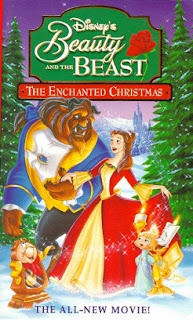 I grew up as a Disney Kid. My mom loved the animated features put out by the studio and passed that love onto me. In the mid-nineties, when the studio started to crank out direct-to-video sequels to its theatrically released animated classics, my Mom was more than happy to scoop them up. I guess we were both pretty naive, assuming these follow-ups would always be up to the quality of the originals. We learned after a few years and stopped buying them by the time “Hunchback of Notre Dame II” came out. Eventually, Disney itself realized that the cheapie sequels deluded the reputation of the originals and quit making them. Nevertheless, I can recall buying “Beauty and the Beast: The Enchanted Christmas” as a kid and happily watching it. It was only the fourth DTV sequel the studio made and the concept still had some novelty. But I'm a grown-up now, ostensibly. So why do I continue to own this film?

The ending to “Beauty and the Beast” made a sequel difficult, as the prince is no longer a beast by the end. Though Disney briefly considered having Gaston's brother turn the prince back into a beast, the solution they ultimately arrived at was more concise. “The Enchanted Christmas” is neither a prequel nor a sequel but takes place in the middle of the original's story. Still locked in the castle, Belle decides an extravagant Christmas party will ease the Beast's pain. In fact, he hates Christmas, as that was the night he was transformed. Belle, with encouragement from the castle staff, decides to go ahead with the celebration anyway. Forte, the evil pipe organ that wants everything to stay the way it is, attempts to interfere. 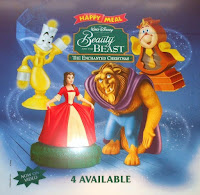 “The Enchanted Christmas'” status as a interquel creates a big problem. In the second half, there's a scene where the Beast feels Belle betrayed him, locking her in the dungeon again. Later, during Forte's final rampage, the magical rose central to the Beast's curse is nearly crushed. If you're watching this movie, odds are good you've seen the first one. So you already know that the Beast will forgive Belle, that the rose will be fine. By setting this follow-up before the first one's end, Disney ripped away any suspense the story might've had. Beyond that, “The Enchanted Christmas” is quite repetitive of the original. Both feature a scene of Belle going into the woods, being endangered. This time by thin ice on a lake, instead of wolves. Both revolve around Belle charming the Beast, melting his heart. Both feature the couple dressed in evening wear while dancing in the ball room. Disney sure was determined to replicate the things people liked about the last one.

Surprisingly, Disney talked all the primarily players from the first movie into returning for this sequel. Even Angela Lansbury as Mrs. Potts and Jerry Orbach as Lumiere return. That certainly goes a long way to making this sequel seem more legitimate. Naturally, the sequel also introduces quite a few new characters. The quality of these new additions vary. Tim Curry, naturally, hams it up to wonderful levels as Forte, the evil pipe organ. Bernadette Peters puts on a convincing French accent as Angelique, the castle decorator/tree topper. Less endearing is Paul Reubens as Fife, the clarinet that is Forte's sidekick. Fife's antics are aggressively wacky and shouted. Jeff Bennet also shows up as a talking axe, who speaks with an exaggerated Jewish accent. Which is certainly, well, an interesting decision.

Curry, as you'd expect, is a highlight of the movie. His big musical number, “Don't Fall in Love”  involves hypnotizing the Beast with pulsating musical notes. It's the sole song that makes an impression. Otherwise, the songs are drippy. Both “Stories” and “As Long as There's Christmas” feature overwrought melodies. Both songs pile on the bombast, attempting to grab a molecule of the emotion that made the first one so good. “A Cut Above the Rest,” a number for Lumiere and Cogsworth, is forgettable and does nothing to advance the plot. The animation, at the very least, looks alright. It's not theatrical quality but does look better than the animated TV shows Disney was also producing at the time. Aside from the decision to create Forte solely through primitive CGI. That was probably a mistake.

Why Do I Own This?: As I mentioned above, my Mom definitely bought the VHS of this film when it was new. I can only recall watching it once but it, nevertheless, resided in our Disney collection. When we made the leap from VHS to DVD, she felt the need to upgrade this one anyway. And when I moved out, it somehow ended up in the box of DVDs that went to my place. So, the answer to why I own this is simply “inertia.” “The Enchanted Christmas” is, truthfully, among the better direct-to-video spin-offs Disney pushed out in the nineties. This means its still a totally mediocre affair that stands up poorly to the original. It is pretty heavy on the Christmas atmosphere and only becomes unbearably saccharine once or twice. Do you think I can get away with wrapping this up and gifting it to Ma on the 25th? [5/10]