From time to time, the topic of worst Christmas movie of all time has come up during these holiday marathons. I found the usual suspects – “Santa Claus Conquers the Martians,” “Santa with Muscles” – to definitely be bad but not entirely without merits of their own. A challenger has appeared. I first read about “Santa and the Ice Cream Bunny” thanks to the trash experts at Bleeding Skull. A few years later, RiffTrax – Michael J. Nelson's revival of “Mystery Science Theater 3000” – would choose the film for one of their live shows. This would expose the Florida produced film to a far wider audience. While I thought about watching the RiffTrax version, I instead decided the raw and uncut version should grace my eyes first. God have mercy on my soul.

You could explain the plot of “Santa and the Ice Cream Bunny” in three sentences. Santa's sleigh ends up stranded on a beach in Southern Florida. He summons children to help but nothing dislodges Santa's mode of transportation. That is when the children arrive with an entity called the Ice Cream Bunny, who drives Santa away in his fire truck. Yet this plot description does not truly prepare you for “Santa and the Ice Cream Bunny.” Instead, the film is largely devoted to a sweaty Santa sitting in a ratty sleigh on an empty beach. Dubbed in dialogue reiterates the same points, that Santa is hot and needs to get back to the North Pole. Midway through, Santa tells the children a fairy tale. We are then treated to a previous Barry Cohen production, either "Thumbelina" or “Jack and the Beanstalk” depending on which cut you're watching, in its entirety. (Including opening and closing credits.) Does that sound fun?

If you don't know who Barry Mahon was, let me explain. Mahon got his start in the film business as Errol Flynn's personal pilot. He would then directed dirt cheap stuff like “Rocket Attack U.S.A.” before largely making nudie cuties – non-pornographic pornography – for most of the sixties. When that dried up, Mahon moved towards Z-grade kiddie flicks. (A mysterious figure known only as “R. Winer” is credited with directing but Mahon is usually considered the film's primary author.) Mahon's touch makes you wonder what even classifies as a movie. The film is a series of repetitive events. The songs are tinny and meaningless. The dialogue was added in post and the sound design hisses constantly. The only truly cinematic touch comes when Santa uses telepathy apparently to alert the local children to his presence. They freeze whatever they are doing and then run off to meet him. Otherwise, “Santa and the Ice Cream Bunny” feels less like a movie and more like a slideshow.

Mahon's need to make movies as cheaply as possible, shipping them out to the most undiscriminating of children's matinees, is likely why most of “Santa and the Ice Cream Bunny” is actually an entirely different movie. I saw the “Thumbelina” version, as that's the cut available for free on Archive.org. Cohen's “Thumbelina” is essentially a filmed children's stage play. Actors roam in cheap animal costumes around areas that are home-made. A bizarre framing device, shot at defunct Florida theme park Pirates World, has a family witness the play as an audio presentation in the park. It's the most baffling of children's entertainment, with the central moral that a girl can't be happy until she marries a man. But there's a weird, home-made charm to it, I'll admit. Most notably in the scene of Thumbelina riding on a giant, talking bird's back. 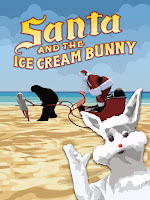 Taking that hour-long presentation away and what are you left with? “Santa and the Ice Cream Bunny,” in its tedium, occasionally presents a moment of unintentional humor or horror. The sand Santa's sleigh is stuck in is very shallow. Yet a procession of multiple animals are brought to dislodge it. Watching the sweaty Santa actor attempt to carole deeply uncooperative animals – a donkey, a horse, a pig, a cow, a sheep – is pretty funny. So is the clear boredom and even anger you see on the faces of the kids sitting on the beach. Clearly, this film was as much fun to make as it is to watch. Lastly, there's the Ice Cream Bunny himself. A white wraith, he appears on a droning fire engine. The costume is obviously unsettling. The dog he meets, for example, is clearly upset by it.

By the way, Huck Finn and Tom Sawyer appear for no reason in the beginning. Why? Because Mahon also attempted a “Tom and Huck” adaptation, recycling the little bit of footage recorded for this project. This guy was, if nothing else, an economical filmmaker. I was really hoping “Santa and the Ice Cream Bunny” would be one of those amazing bits of Z-grade film, accidental outsider art that baffles and fascinates. Instead, it is pure kiddie flick Hell, a tedious experience that only fitfully entertains. The best I can say about “Santa and the Ice Cream Bunny” is that it's definitely ninety-five minutes of moving images. [2/10] 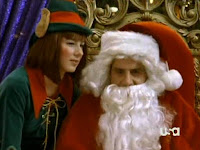 “Monk” was a fun series. As formulaic as any other detective show, its quirky sense of humor frequently helped patch over those cliches. (This style would largely dictate the USA Network’s style of programming for a few years.) The fantastic cast, especially Tony Shaloub as the titular character, also went a long way. Though far from the most realistic portrayal of Obsessive Compulsive Disorder, I still saw a lot of myself in the detective’s neuroses. It was regular viewing for Mom and I. Beginning in its fourth season, the show began producing holiday episodes in December. “Mr. Monk and the Secret Santa” was the first of these special episodes.

The episode begins at the San Francisco Police Department’s annual Christmas party, where Secret Santa gifts will be exchanged. A bottle of Merlot is gifted to Captain Stottlemeyer, who does not like Merlot. He ends up re-gifting the drink to Detective Terry Chasen. Upon drinking the wine, Terry dies, poisoned. Feeling guilty, Stottlemeyer let’s Monk figure use his particular skills to hunt down the killer. The investigation eventually leads him to a veteran with a grudge against the Captain. But is this the responsible party?

As always, a large part of “Monk’s” appeal is watching the exceedingly nervous Adrian Monk respond to extraordinary situations. He actually does surprisingly well when dealing with the Secret Santa party, receiving a dust pan with enthusiasm. Later, he’s less understanding of the gift of a gold fish. “Secret Santa” delights in placing the neurotic detective in Yuletide traditions. He decorated a tree a bit too meticulously. He stumbles his way through caroling, being repeatedly burned by the candle wax. When he ends up posing as a mall Santa, it’s contrived. It’s also pretty funny, as Monk is forced to react to a series of unruly kid. (And hilariously ends up crying in front of one of them.) As silly as this stuff may be, it’s exactly the kind of easily digestible laughs that made this show so entertaining.

Of course, the supporting cast for “Monk” was also aces. They get repeated chances to shine here. Traylor Howard is delightful as the bubbly and endlessly patient Natalie, Monk’s assistant. Her fleet footed comedic talents are displayed in moments where she dresses as an elf or has a conversations about Christmas sweaters. Jason Gray-Stanford plays Randy Disher, the frequently ridiculous sidekick to the Captain. His highlight in this episode includes jamming out during an acoustic rendition of “O Holy Light.” Lastly, Ted Levine also brought a quiet humanity and humor to Captain Stottlemeyer. This is best shown here turning an exchange with a nun, that starts tense but diffuses into sweet perfectly. “Mr. Monk and the Secret Santa” is so delightful that you don’t even mind the fairly bullshit resolution to the mystery, something this show did all the time. [7/10]