If nothing else, these Christmas marathons give me an excuse to sit down and finally watch established “modern” classics that have never graced my eyes before. In the past, I've found beloved holiday mainstays like “A Christmas Story” and “Christmas Vacation” to be underwhelming, if not outright obnoxious. Over the last decade, another December classic has emerged. “Love Actually” was the directorial debut of Richard Curtis, the famed writer of “Four Weddings and a Funeral.” It became a sleeper hit in 2003 and has since gained the reputation of a modern Christmas classic. Like with the aforementioned Christmas “classics,” I fully expected to hate this one. Finally sitting down and watching “Love Actually,” I am absolutely ashamed to admit I sort of liked it.

In the weeks leading up to Christmas, different stories play out across London. Newly elected Prime Minister David makes waves with the U.S. President while developing feelings for his secretary, Natalie. Washed-up rock star Billy Mack records a syrupy Christmas single, ruthlessly mocks it on television, and ends up revitalizing his career. Juliet has recently married Peter and slowly discovers that Mark, his best friend, is in love with her. Would-be writer Jamie becomes attached to Aurelia, his Portuguese housekeeper. Harry and Karen's long marriage is threatened when Mia, an employee of Harry, attempts to seduce him. Widower Daniel tries to help his stepson, Sam, pursue his crush. Shy Sarah harbors a crush on Karl, a co-worker, but devotes most of her energy to helping her mentally ill brother. Slowly, these story threads begin to come together.

Apparently, Curtis originally intended to make whole movies out of some of these plots before deciding to mash them all together. In my mind, only one story in “Love Actually” probably could've stood on its own. There's a lot of talk about love in “Love Actually” – duh – but only one of the plot threads addresses the weigh of commitment, the compromise necessary for a long term relationship. Harry and Karen's marriage seems to be comfortable but somewhat complacent. When Mia, played by the stunningly beautiful Heike Makatsch, begins to gratuitously hit on him, he is tempted. The film never outright says if he cheats, though it heavily implies he does. (Curtis later confirmed this as true.) However,this insertion of doubt cast a shadow over the love Karen thought they had. It's a melancholic story about loosing something you though you could rely on. Alan Rickman and Emma Thompson beautifully bring it to life.

In any film with competing story lines, some plot threads emerge as more interesting than others. The thread involving Billy Mack resolves itself in a kind of half-assed way. Watching Bill Nighy ham it up as an old rock star who has run out of fucks to give, however, is delightful. I'm touch and go on Hugh Grant but he's genuinely charming as the somewhat nerdy Prime Minister, a workaholic who isn't sure how to approach romance. (His story also features a nicely cast Billy Bob Thornton as the sleazy POTUS.) Liam Neeson, coincidentally and sadly playing a widower a before he actually became one, invests a lot of quiet humor and pathos. Even if a story about a dad helping his nine year old kid get quote-unquote laid is a little weird. Among the least essential stories is Martin Freeman and Joanna Page as sex scenes stand-ins for movie stars. Despite constantly being naked around each other, the two form a surprisingly wholesome romance, mostly thanks to the laid-back charm of both performers.

However, there are definitely several plots in the film I'm indifferent to and a few I outright dislike. The love triangle between Juliet, Peter, and Mark is hopelessly underdeveloped. Considering he barely knows her, Mark's obsession with Juliet can't help but come off as creepy. The oft referenced scene where he confesses his love via cue-cards seems like a self-serving and melodramatic gesture to me. Jamie and Aurelia's romance features some very contrived moments, such as when he takes his manuscript outside on a windy day. While Laura Linney is wonderful, Sarah and Karl's storyline is also hopelessly underwritten, never giving the audience too much of a reason to care. (We learn almost nothing about Karl.) Lastly, the plot involving an obnoxious guy named Colin who goes to America strictly to get laid – which works even better than he imagined – is totally disposable, pointless, and frankly pretty gross.

When “Love Actually” came out, being a typically myopic budding film nerd, I dismissed it as your usual rom-com, a “chick flick.” The movie is not as saccharine as that label implies. However, Curtis still indulges in some of the tropes of the genre. First off, there's quite a few overly specific needle drops throughout the film. “Love Actually” signals its setting changing to America by blaring “Smooth,” for one example. And that fucking Mariah Carey song shows up too. Secondly, the ends with – count 'em! – four big romantic gestures being used to win over a love interest. David goes door-to-door in Natalie's neighborhood, looking for her. Sam runs through the airport, after the nine year old girl he barely knows. Jamie learns Portuguese before leading a crowd of supporters into the restaurant where Aurelia works. You would've thought that such an overdone cliché would be totally discredited by 2003. Apparently not, as “Love Actually” deploys it with gusto.

Oh yeah, I also found the various ways the plots connect to be a bit too cute for its own good. Still, “Love Actually” is worth seeing, if only for some strong performances and a handful of touching or funny moments. (Such as the very odd nativity play that features at one point.) The Christmas setting is mostly window-dressing. The film's themes of love are more generally sappy, less about a sense of love and charity towards your fellow man that December engineers. The film's status as a perennial favorite is such that, fourteen years later, a short film sequel was produced. I'm not totally on the “Love Actually” boat or anything but I did like this one way more than I expected. [7/10] 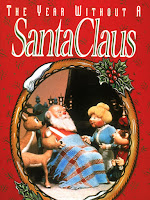 By the mid-seventies, Rankin/Bass had produced most of their holiday specials that would become established classics. The rest of the company’s seasonal output would be quickly consigned to pop culture history’s dustbin... With the exception of one. “The Year Without a Santa Claus” was adapted from a book by Phyliss McGinley but also served as a loose sequel to the earlier “Santa Claus is Coming to Town.” It seems to me nobody talks about this one much until the late nineties, when repeated showings on whatever the Family Channel was called at the time, suddenly made it some sort of ironic cult classic. I don’t know why it took me this long to review it.

Christmas-themed entertainment threatens to cancel the holiday all the time. This is usually the work of some nefarious force or a contrived accident delaying Santa. “The Year Without a Santa Claus” is different in that Santa’s own cynicism is what causes Christmas to nearly be cancelled. Granted, a cold and a grumpy elf doctor contributes but St. Nick himself is the one with the Christmas blues this time. He’s convinced nobody believes in him anymore. Rankin/Bass, of course, couldn’t let that interesting premise stand on its own. They had to throw in a bunch of bullshit. So the plot hinges on two annoying elves and Mrs. Claus trying to get it to snow in Southtown, USA. This must be done by negotiating with the Snow Miser and the Heat Miser, two rival celestial beings (and stepbrothers, apparently) that control the cold and warm climates.

In any other context, that plot would be utterly nonsensical. In the wacky world of Rankin/Bass, this qualifies as one of the more logical stories. It must be said that “The Year Without a Santa Claus” includes some memorable moments. Most of the antics in Southtown are broad and dumb, especially Jingle and Jangle attempting to disguise a reindeer as a dog. However, I do like the family an undercover Santa meets there, who strike me as pretty well-adjusted. The Miser Brothers are what most people remember about this one. Indeed, they are flamboyantly likable characters. Their petty rivalry gives them more personality than most of Rankin/Bass’ rogue galleries. The way this plot is resolved - Mrs. Claus getting their shared mom, Mother Nature, to intervene - continues that squabbling siblings feel. And they are so proud of their contributions to the world. You can’t help but like them, even if they are stubborn assholes.

Perhaps the reason this special endures, when so many of the company’s other specials are forgotten, is the music. All the songs are pretty damn catchy. The title song has a nicely hummable melody. Shirley Booth’s big number, “I Could Be Santa Claus,” does nothing to advance the plot but is awfully cute. “I Believe in Santa Claus” is sappy but also has a lovely melody. “It’s Gonna Snow Here in Dixie” is probably my favorite number in the special. The mayor gloating as he smoothly skates around town is an amusing sight. Both the Miser Brothers’ songs are repetitive but insanely catchy, with an infectiously thumping big brass instrumentation. I even sort of like the rendition of “Blue Christmas” we get here. 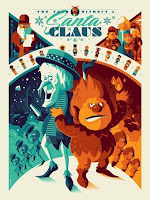 The special’s popularity can be seen in its various follow-ups and tie-in merchandise. A live-action remake was made in 2006 while a Miser Brothers-centric sequel was made by another company in 2008. There was even a line of action figures from NECA. (And, of course, there was Snow Miser’s unforgettable cameo in “Batman and Robin.”) It’s not as good as “Rudolph,” “Frosty,” or even the Santa story it’s kind of sequelizing. Yet “The Year Without a Santa Claus” still stands above most of Rankin/Bass’ holiday output. [7/10]