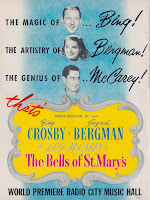 Pubic taste changes. These day, the biggest film of the year is usually some special effects driven action extravaganza. In 1944, the highest grossing film of the year was “Going My Way,” a drama/musical starring Bing Crosby as a Catholic priest. The film grossed almost eight million dollars, about the modern equivalent of 114 million, and won seven Academy Awards. Public taste changes but something that's true was also true then. Massive box office hits are often followed by sequels. The very next year, Crosby's Father O'Malley would return in “The Bells of St. Mary's.” The sequel was also a huge hit, outperforming the original and becoming the highest grossing film in RKO's history. It would win one Oscar out of eight nominations. In the years since, it's required a reputation as a Christmas classic.

Father O'Malley arrives at St. Mary's, a Catholic parish that has seen better days. The buildings is on the verge of being condemned. This would force the kids living there to be transferred across the city. The impending closure weighs heavily on Sister Mary Benedict, the head nun in charge at St. Mary's. She's hoping they'll be able to move into the under-construction building next door but there's no guarantee the businessman who owns it, Horace Bogardus, will let them. Meanwhile, Father O'Malley and Sister Benedict butt heads over their differing approaches to taking care of the kids.

That “The Bells of St. Mary's” was such a blockbuster in 1945 really shows how different things were back then. The film is a slice-of-life drama with relatively low stakes. The parish being threatened with closure is the big dramatic concern in the story. Yet even this issue does not take up all of the film. Instead, much of “The Bells of St. Mary's” is simply about the day-to-day life in the parish. A boy is being bullied, so Sister Benedict teaches him how to box. A teenage girl is doing poorly on her tests, so Father O'Malley begins to tutor her. The only bit of melodrama at all comes when Sister Benedict is diagnosed with tuberculous. Even this is handled with a fairly gentle hand. This laid-back tone gives the movie considerably charm.

Another big factor in the film's favor is its two lead performers. Much of the film's box office success can be attributed to Bing Crosby, one of the biggest stars of the forties. Bing's winning screen persona is hard to deny. He plays Father O”Malley as someone who does things his own way but is always motivated by good reasons. Ingrid Bergman is similarly fantastic as Sister Benedict. Bergman brings total sincerity to the part, a woman who is unmovable in her own way as Father O'Malley is. The chemistry the two have is gentle, quasi-romantic, their conflict remaining gentle even at its most heated.

You could call “The Bells of St. Mary's” is a musical, though its not of the all-singing/all-dancing variety you associate this period with. I can recall any dancing in it at all. Instead, the songs emerge organically out of the story, usually occurring as Crosby and some kids gather around the piano. None of the music is especially memorable. “Aren't You Glad You're You?” would become a hit single for Crosby and it's, admittedly, cute. The title song is pretty, performed by Crosby and a children's choir. None of the music lingers in the memory though. There's certainly nothing here to compete with “Swinging on a Star” from “Going My Way.”

I seem to recall “The Bells of St. Mary's” getting shown on cable around Christmas all the time. The film certainly has a reputation as a Christmas movie. Yet it's actual seasonal content is minor. There's an absolutely adorable scene where a group of kids put on a nativity play. The spirit of giving does feature prominently in the last act. Otherwise, there's no Christmas trees, snow, Santa Claus, or any secular signs of the time of year. While inferior to “Going My Way,” “The Bells of St. Mary's” is still a deeply wholesome and genuinely delightful motion picture. [7/10] 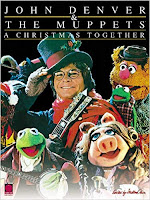 John Denver and the Muppets: A Christmas Together (1979)

My Mom loves John Denver. Growing up, I heard his music a lot. Since I was a kid, I've loved the Muppets. So, it goes without saying, that one of our favorite records to listen to around the holidays was “John Denver and the Muppets: A Christmas Together.” Though I've heard the music many, many times throughout my life, I've never actually seen the television special these songs originated in. This is obviously because “A Christmas Together” has never been released on home video. Luckily, bootlegs copies and Youtube uploads have circulated freely. “A Christmas Together” is a variety special in the truest sense, as it's composed of musical numbers and comedy bits. What plot exists is about Denver trying to corral the Muppets, and Miss Piggy's ego especially, so they can put on a smooth show.

As with any program in this style, you can split “A Christmas Together” pretty evenly into segments that work and segments that don't. The opening rendition of “The Twelve Days of Christmas,” a song I normally do not like, is used to introduce each of the Muppet players and their personality. It works pretty well at that, especially with the way Fozzie stumbles his lines. The scenes where Piggy attempts to seduce Denver are funny, as the pop star is clearly having a blast. The scene where Rowlf and Denver sing “Have Yourself a Merry Little Christmas” is nicely stripped down. The finale, where the Muppets sing “Silent Night' in English and German while Denver explains its history, is pretty. The calypso rendition of “Christmas is Coming” is also high energy and likable. 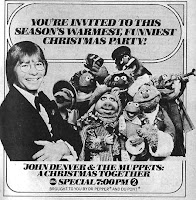 There are definitely some clunkers though. A sequence near the end, telling the Nativity story, features the creepiest muppets this side of “The Dark Crystal.” A scene where Denver plays a tin soldier, leading up to Miss Piggy performing a romantic ballad, is a real clunker. The song is annoying and the physical comedy is not so hot. The song-and-dance number that occurs early on goes on for a bit too long. Quite a few of Denver's solo numbers are slow and maudlin. Even a duet with Kermit drags the pace way down. I'll admit to liking his reading of “Alfie the Christmas Tree,” a seasonal environmental poem Denver penned that eventually become a children's book my mom read to me many times.

I was disappointed that many of my favorite numbers from the “John Denver and the Muppets” album did not originate in this special. The renditions of “Little Saint Nick” and “When the River Meets the Sea” are classics. The album itself obviously had a far longer shelf life than the program that inspired it. Still, this is a fun little special that is clearly in the vein of “The Muppet Show” episodes it spun off of. It's doubtful an official home video release will ever arrive, so the hazy and scratchy Youtube rips will probably have to suffice.  [7/10]