Halloween tends to dominate my holiday season, sometimes to the exclusion of everything else. In the past, my attempt to do a Christmas marathon in December have not always worked out too well for me. Well, it's December 1st and I'm trying it again. I have no idea how this is going to go. Odds are pretty good it'll go off the rails within a week or so. Until then, I'll try and wring some holiday cheer out of the blackened, dried-up husk I call my soul. Let's watch some classic and not-so-classic Christmas movies, TV specials, and episodes.

I'm choosing to start 2018's Christmas marathon with “Meet Me in St. Louis.” This is only slightly a cheat. Vincente Minnelli's classic 1944 M-G-M musical is not strictly a Christmas movie all the way through. Yes, it's last act is set around the holiday and it features the iconic song “Have Yourself a Merry Little Christmas.” Yet there are long scenes set around the summer time and the finale is during the spring. There's even a pretty excellent sequence taking place on Halloween. In fact, that makes “Meet Me in St. Louis” a good choice to kick off the holiday season. The mixed approach allows a Halloween loving scrooge like me to slowly ease into the so-called most wonderful time of the year.

The year is 1903 and the setting is St. Louis, Missouri. The whole city is abuzz about the World's Fair, set to begin the next year. We follow the Summers family: Father and stuffy lawyer Alonzo, busy mom Anna, oldest daughter Rose, middle daughters Esther and Agnes, and youngest daughter Tootie. Romance blooms in the summer time, as Esther develops a crush on John, the handsome boy next door. Her attempts to woo him during a family party and trolley ride do not go as expected. On Halloween, rambunctious Tootie attempts to match-make the two in a sneaky way. Alonzo then informs the family that they will move to New York after Christmas, casting a melancholy mood over the holiday season. 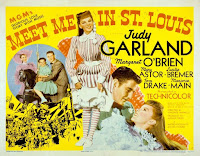 “Meet Me in St. Louis” is a charming and occasionally very funny film about a family, and a country, in transition. In an early scene, Rose is about to receive a phone call from her potential fiance. The change in the family's life is tied in with the ways technology is changing the world. The incoming World's Fair, and the technology and global connection it brings, provides further contrast to the smaller story of the Smith family. There's much humor to be had, usually when the dad and his lacking sense of humor, reacts to the shenanigans of his very different daughters. The relationship between Esther and Tootie, played brilliantly by Judy Garland and Margaret O'Brien, is pretty darn charming.

Ultimately, what I find most compelling about “Meet Me in St. Louis” is the darkness lurking under its bright, Technicolor surface. Tootie is a weird kid. She holds funerals for her dolls, playacting their illnesses and deaths. She sings songs about getting drunk and pulls pranks on people. The Halloween sequence is even mildly spooky. Such as when the girls, back-lit by a bonfire, walk down a lonely street towards the home of a town bully. While “Have Yourself a Merry Little Christmas” has become a standard, many miss the melancholy at the center of its heart. The lyrics, after all, talk about muddling through somehow and all our troubles being out-of-sight next year. Esther sings the song to reassure Tootie, distraught about the family moving away. Afterwards, the little sister then proceeds to destroy the adorable snowmen in the family's yard. This sadder streak is what really drives “Meet Me in St. Louis.”

Classic musicals like this, when the focus turns to romance, have a tendency to be schmaltzy. “Meet Me in St. Louis” somehow avoids this. There's a funny back-and-forth to Esther and John's courtship. Her attempts to attract him, while turning off the lights in the house, amusingly does not go as she had planned. A meeting on a trolley train ends with the girl becoming embarrassed. Eventually, Esther and John do get together. There's other romantic subplots, involving Rose. The love story is cute but it's refreshing that the film really values the relationship between the sisters over their various romantic entanglements.

Despite its status as a classic musical, “Meet Me in St. Louis” is not as jam-packed with songs as you might expect. This is absolutely a plus, as an overabundance of musical numbers tend to slow down films like this. Aside from the Christmas song, the film features a few other iconic singles. Such as the insanely catchy titular song, which actually dates back to around 1903. Or “The Trolley Song,” which is definitely among the film's most energetic sequences. In fact, the film utilizes several melodies from the actual time and place. A few of these, like the Asian-influenced “Under the Bamboo Tree,” drag a bit. Still, for the most part, the film smartly balances its musical elements with its narrative needs. 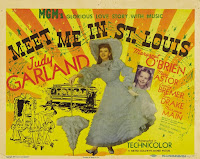 I don't usually count myself as a Judy Garland fan. However, I'll say that “Meet Me in St. Louis” definitely deserves its status as a classic film. It's awfully pretty to look at. The colors really pop, the set are opulent and the costumes are gorgeous. There's even something to be said for Vincente Minnelli's direction, which seems to favor an enchanting artificial quality over any realism. Unsurprisingly, the film would be nominated for several Oscars the next year and eventually swamp a stage version. (There were also two made-for-TV remakes but nobody ever talks about them.) It's a pretty good flick. [7/10]

It just doesn't feel like December without the Muppets. I associate Jim Henson's famous felt creations with the holidays due to their 1995 take on “A Christmas Carol,” which is among my favorite Christmas movies. Yet Henson's creatures have appeared in several holiday specials over the decades. The first of which was 1970's “The Great Santa Claus Switch.” The plot concerns Santa and a surprisingly small set of elves, led by an enthusiastic little guy named Fred, as they prepare for the big night. However, a villainous wizard named Cosmo Scam, who just happens to live in a cave directly below Santa's work shop, has other plans. He intends on kidnapping Santa, assuming his identity, and using Christmas night to rob hundreds of people blind. It's up to Fred and the other elves to save the day.

“The Great Santa Claus Switch” is an extremely early Henson production, coming only a year after “Sesame Street” started and six years before “The Muppet Show” premiered. The special would spin out of several appearance Henson's creations made on “The Ed Sullivan Show.” Accordingly, Sullivan narrates the story, reading it from a story book to a group of extremely bored looking children. The special will likely most interest “Muppet” fans for its historical value. Cosmo's servants are called Frackles, which is a very similar name to the Fraggles, a later breed of subterranean muppet. Among the Frackles is a creature with sad eyes, purple fuzz, and a curved nose. In other words, an obvious prototype for Gonzo. Cosmo's biggest henchmen are rotund critters known as Thig and Thog. Both would become reoccurring bit players on “The Muppet Show.” All the voices are very recognizable, with Fred sounding identical to Ernie and Lothar, Cosmo's spidery adviser, having a similar attitude to Rowlf the Dog.

Looking beyond its pivotal role in Muppet history, “The Great Santa Claus Switch” has little else to recommend. The plot is largely inane and the moral, about the magic of Christmas and the power of giving, is trite as can be. The pacing is sluggish, feeling like it should be over long before its fifty-one minute run time is up. This is especially noticeable in the utterly glacial Ed Sullivan host sequences. Art Carney, playing both Santa and Cosmo, hams it up to ludicrous and intoxicated-seeming degrees. The songs are largely forgettable. When they aren't annoying, such as the deeply schmaltzy Christmas ballad. The special effects are underwhelming, with Santa's magic mostly consisting of the changing the colors on the set.

There's really only a handful of jokes here that work. Such as Fred singing so enthusiastically that he doesn't notice Santa being grabbed. Or Cosmo slowly replacing the elves with his own puppets, which the other elves slowly notice. Mostly, the humor is lame reoccurring gags – such as Santa failing to perform simple magic tricks – or painful wordplay, such as an extended scene involving rock puns. “The Great Santa Claus Switch” has never been released on home video, surviving only as blurry bootlegs and Youtube uploads. You'll have to track the one-off down if you want to see it but, unless you're a Muppet obsessive or really trying to find something new to watch for Christmas, I'm not sure it's worth the effort. [5/10]