In America, foreign language films, especially those made in Europe, have a reputation as being dour, down-beat, and pretentious. It's not a totally unearned distinction. Not because they don't make movies of all types in Europe. It's because the European films that get the most critical praise on this side of the ocean tend to fit that description. So when I heard there was a French Christmas movie from 2008, I was not surprised to see it considered among the most depressing holiday viewing. The film was even released by the Criterion Collection, seeming to confirm its status as a heavy, important movie. Watching Arnaud Desplechin's film, I was surprised that it has more in common with American Christmas movies than expected.

The Vuillard family has baggage. Abel and Junon's first child, Joseph, was diagnosed with leukemia at six years old. Abel and Junon would conceive three more children – Elizabeth, Henri, and Ivan – all in a desperate attempt to provide Joseph with a bone marrow donor. It didn't work and the boy died. Though Abel and Junon have done everything they can to hold the children together, resentment has emerged among the siblings. As Christmas approaches, Junon receives news that she has leukemia as well. The siblings, their kids, spouses and girlfriends, gather in the family home in the days before the holiday. The old wounds open again, especially once it's discovery that Henri is a marrow donor for his mother.

Despite what I had read, “A Christmas Tale” is not an excessively dour film. In fact, it's about as upbeat as a movie about someone being diagnosed with cancer can be. Instead of a French mope-fests, it's actually a naturalistic drama about the tension that arises with family get-togethers. Elizabeth and Henri resent each other, the siblings getting into arguments – and the brother even getting punched at one point – several times. Elizabeth's son Paul is mentally ill, his condition weighing on his parents. There's unresolved romantic tension between Ivan's wife and his cousin. All of this is depicted as normal side effects of a large family, with a lot of history, getting back together. There's even quite a bit of humor, when Henri makes a midnight escape or constantly mixes up his nephews.

More than anything else, “A Christmas Tale” is largely a showcase for its accomplished cast. Mathieu Amalric, who I only know from his milquetoast villain turn in “Quantum of Solace,” is fantastic as Henri. He's a drunken screw-up but with compassion and a sincere desire to be forgiven. If anything, his qualms with his siblings are pretty reasonable, considering how they treat him. Catherine Deneuve is steely as Junon, the unflappable matriarch that doesn't let anything hold her back much. Anne Cosigny conveys how deeply wounded Elizabeth is. While the Ivan and Simon's subplot is the film's least essential, it's no fault of Melvil Poupaud and Laurent Capelluto. Even the supporting roles, such as Emmaunelle Devos as Henri's girlfriend, have a fair bit of wit and humor. 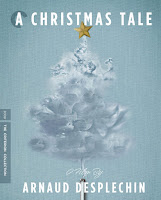 I have no familiarity with Arnaud Desplechin's other films. However, it's apparent from this one film that the director has a distinct visual style. The family's history is portrayed through a lightly animated sequence, something like a shadow puppet show. Through the film, he uses smoky silent-movie style irises to create a nostalgic and warm mood. Characters speak directly into the camera and each of the siblings get moments to narrate. One scene even utilizes a DePalma style split screen. More often than anything else, Desplechin's camera peers into the tight interiors of the home, making the audience feel the intimacy of this family gathering. While a largely simple story of sibling rivalry and family tension, Desplechin sees plenty of opportunities to make a visually notable experience.

“A Christmas Tale” ends on a note of uncertainty, Junon's – and the family's at large – fate unresolved. Despite that, I found “A Christmas Tale” almost life-affirming. Despite all the in-fighting and complications, these people do love each other. This family interaction is the real Christmas tradition at the center of “A Christmas Tale,” as gift-giving and setting up the tree are largely meant to provide the characters a chance to talk. The film is well crafted, with strong performances, and some interesting themes on its mind. While it's likely too long and too heavy for most Christmas marathon, it is an interesting inclusion to the holiday film canon. [7/10]

I wasn’t much of a fan of Rankin/Bass’ “The Little Drummer Boy,” finding it off-putting in a lot of ways. However, it was an early Christmas special for the company. By the mid-seventies, the half-hour original must’ve become some sort of seasonal favorite. That’s when, eight years later, a sequel was produced. “The Little Drummer Boy, Book II” picks up minutes after the end of the original. After playing his drum for the newly born Christ child, Aaron the Drummer Boy decides to join King Melchior on a journey. Melchior is meeting with Simeon. He’s a bell maker who envisioned the arrival of Christ and made a set of giant silver bells to ring in the Passion. When a group of greedy Roman centurions take the bells as tax payments, Aaron and his animal friends head off to retrieve them.

“The Little Drummer Boy, Book II” is marginally better than the original. Asking what happened to the Little Drummer Boy after the end of the song is an interesting question. Having him go off with one of the kings is as good an answer as any. The resulting plot does not strike me as Biblically or historically sound. Simeon is a lost prophet of early Christianity, I guess. When you remember Jesus was literally a newborn at this time, ringing out huge bells to announce his arrival must’ve confused a lot of local people. But neither Christmas carols nor Rankin/Bass specials were meant to stand up to much scrutiny. 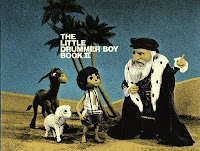 Taken on its own, the special is mildly entertaining. Zero Mostel is amusingly hammy as Brutus, the boisterous and sarcastic leader of the centurions. His big music number, describing how currency replaced trade, is admittedly damn catchy. Aaron proves a very passive protagonist here, as he basically just follows the more important characters around. His animals, which thankfully do little of their creepy dancing, are the ones that actually save the day. With far less story than the original, this sequel just breezes by. That’s not a complaint. While an unnecessary sequel to an inessential original, “The Little Drummer Boy, Book II” is a totally painless watch. [6/10]