Every December – and, more often than not, November too – brings a ton of new Christmas movies. Most of these are not high profile releases. Instead, they fill out cable channels, DVD dump bins, and the obscure corners of various streaming sites. Yet, as the way we watch movies has evolved, going straight-to-Netflix is not necessarily a sign a film is cheap or bad. “The Christmas Chronicles” starred a fairly big actor, in the form of Kurt Russell. Netflix even doled out enough cash to get balloons promoting the film into the Macy's Thanksgiving Day Parade. Netflix clearly threw their hat into the holiday movie ring with this one.

Since their dad died, siblings Teddy and Kate do nothing but fight. Things get especially tense as the holidays approach, Kate still believing in Santa Claus and Teddy falling in with a bad crowd. That's when Kate, rewatching an old family home movie, seems to discover irrefutable proof of Santa's existence. They set up alarms up and, indeed, discover the mythical figure in the flesh. After sneaking into his sled, they accidentally collapse the red sleigh and loose the magical bags of gifts. Now the brother and sister must team up with Santa Claus as they go about gathering what the jolly old elf needs to save Christmas.

“The Christmas Chronicles” obviously had some money behind it. Aside from Russell's presence, and the Elvis song on the soundtrack, there's some elaborate special effects in the film. Santa's sleigh leaps through magical green portals before crashing in a big set piece. There's a big chase scene involving flying reindeer. Aside from the pricey special effects and a story that's slightly larger in scope, there's very little separating “The Christmas Chronicles” from your typical Hallmark holiday movie. From the minute he appears in the opening montage, you know the Dad is going to die. The story of the siblings learning to overcome their differences is highly sappy, that maudlin quality peaking during the resolution. Santa's magic seems to include the ability to mend broken relationships, as he also helps a cop get back together with his ex-wife.

So the script is unspectacular. That doesn't stop Kurt Russell from doing his damnedest to elevate the material. By applying his trademark wink and coolness to the part, he creates probably the hippest version of Santa to ever grace the screen. He constantly complains about the way pop culture depicts him as fat, even though he's lost weight, or saying “Ho ho ho,” which he doesn't actually do. After his sleigh goes down, he quips about “fake news.” Russell's Santa remembers every kid he's ever visited and even what they wanted, an incredibly charming attribute. This peaks during a funny sequence in a restaurant. Undoubtedly the highlight of the film is when Santa pulls together a rock band while in a jail cell, leading to a rousing rendition of “Santa's Back in Town.”

Kurt's charm goes a long way. However, it's ultimately not enough. “The Christmas Chronicles” peak early, during a scene where Kate falls into Santa's magical bag. It's a moment of genuine whimsy and visual inventiveness. It's also the last grasp of true creativity in the movie. After that, Santa's elves are introduced. Fluffy and squeaky creatures, they are brought to life with cutesy CGI that recalls both kittens and teddy bears. They remind me a lot of the damnable Minions, by speaking in gibberish and committing anarchic acts. This desperate insertion is the sign that “The Christmas Chronicles” is totally out of ideas. The energy in the last half-hour is peaked, as the film moves in every expected way towards its conclusion.

Really, it would've been easy to make the movie more interesting than it ended up being. Just forget about the kids and their totally cliched storyline. Make Kurt's Santa the main character, devoting the adventure to him entirely. Ditch the fluffy elves too. Instead, we get an otherwise typical holiday distraction with a likable central performance and some slight visual zest. Oh, and a pretty cute post-credits scene. Netflix will never tell us how often their original programming is viewed but it sounds like “The Christmas Chronicles” did just fine for them. However, it's pretty clearly not going to become a new holiday classic. [5/10] 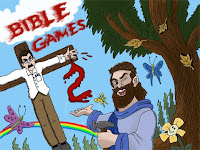 Two years after reviewing a bunch of shitty religious games, the Angry Video Game Nerd was back at it for another Christmas episode. The episode focuses on another collection of mostly unlicensed Nintendo games, primarily developed by the sketchy Wisdom Tree company. The Nerd grapples with monotonous puzzle game “Exodus,” an irritating group of simple religious games for the CD-I, the decent but baffling “Noah’s Ark” by Konami, before spending most of the episode on “Sunday Funday.”

The main appeal of AVGN is usually seeing the Nerd swear creatively while loosing his shit at frustrating video games. There’s certainly plenty of that here, such as the Nerd’s growing frustration at the shitty level design and mechanics of “Sunday Funday.” My favorite line of dialogue here is when he describes the voice acting in the CD-I games as the “fuckest bologna shit” ever. I also like the way the repetitive and obnoxious sound effects in the same games quickly drive him up the wall.

Yet the main appeal of this particular episode is just getting a look at these super cheap, weird games. “Noah’s Ark” has Noah fighting Indians and giant spiders, as well as turning into a fish. “Sunday Funday,” meanwhile, is just an identical remake of a violent beat-em-up called “Menace Beach.” The partial nudity is replaced by Bible verses but the exploding bodies and fist fights are maintained. The Nerd’s bafflement at the game, assuming the enemies are “raging atheist,” is what made me laugh the most. Mostly, this episode - amusing enough but not an all-timer - makes me feel sorry for kids with hyper-devout parents. Instead of playing real games, they got cheap bullshit that exploited their faiths for dollars. [7/10]