Being someone who is both old and watched way too much TV as a kid, I'm aware of performers who were popular during my grandparents' days without actually being exposed to them. Like, for example, Jimmy Durante. I certainly recognize Durante's trademarks: His bulbous nose, his particular speech patterns, his mangling of aphorisms. At the same time, I don't think I've ever actually seen one of Durante's movies, with the exception of his narrator role in “Frosty the Snowman.”  Turns out this is not Durante's only Christmas-related credit. He also starred in 1950's “The Great Rupert.” Upon hearing that George Pal did the stop-motion effects for the film, I decided to add it to my December watch list.

Joe Mahoney is a circus performer whose latest act is Rupert, a dancing squirrel. Sadly, Rupert does not impress Joe's agent and is evicted, forced to set Rupert free. Immediately afterwards, the Amendola family moves in. At the same time, the landlord starts earning lots of money from a gold mine investment. Distrusting of banks, he puts the cash in the wall. Rupert returns to the house and takes up residence in the same alcove. So when the Amendola's run short on cash, Rupert coincidentally tosses cash out at the same time. Father Louie, also a performer, starts to spend the money extravagantly at Christmas. Daughter Rosalinda is romantically pursued by the landlord's artsy son. All the while, they are unaware that a little squirrel is responsible for this miracle.

Apparently Durante was a last minute addition to “The Great Rupert,” which was written primarily as a vehicle for Terry Moore. Despite this, Durante seems to function well within this material. As the quirky patriarch of a destitute family, he's lovable in a goofy way. The film makes room for his trademark skills. During the Christmas party, he drops verbal comments and performs a comedic piece on the piano. These elements characterizes “The Great Rupert's” general wholesomeness. The love story subplot involving Terry Moore is pretty cute. Her intended getting jealous of the talent agent who is sniffing around her for a while but ultimately things turn out all right. The general premise of the story, the family's prayers being answered in the most unexpected ways, is cute as well.

As a comedy, “The Great Rupert” produces the occasional chuckle more often than big belly laughs. The best gag in the movie involves a bear skin rug that is also a radio, a joke that pays off well at the very end. Durante's performance of “Jingle Bells” is interrupted by the incompetence of his partner, a decent joke. A little gag involving an overly large pair of shoes made me chuckle. A milkshake with whipped cream is well utilized in one brief moment. Once the government becomes aware of the Amendola's sudden windfall, the different organizations come calling, each in their own amusing way. These are small laughs but I enjoyed them. 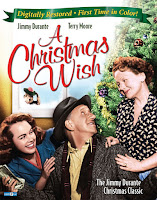 Despite being the title character, Rupert the Squirrel actually plays a fairly small role in “The Great Rupert.” In fact, the Amendola family is never actually aware of the squirrel's presence. That actually makes the story a little more meaningful, Rupert's acts of kindness going totally unrewarded. As for George Pal's stop motion effects, there's not too much to say about them. When Rupert is switched out from a real squirrel to a puppet one is very evident. Yet there is a creaky charm to the scenes where the squirrel awkwardly starts to dance to jump around. It's not exactly realistic or charming, as the animated Rupert has weirdly long limbs. But it is cute in its own way.

Filmed in 1948 but unreleased until 1950, it was Pal's first feature length credit and an early starring role for Moore. Afterwards, “The Great Rupert” would fall into the public domain, leading to a variety of home video releases. (Including a colorized version under the title of “A Christmas Wish.” Considering Christmas and the squirrel play about an equal role in the film, it's not the worst re-titling they could've made.) Though ultimately a bit on the forgettable side, “The Great Rupert” is a cute family film that will hopefully produce some chuckles or maybe even some warm-and-fuzzies during the winter months. [6/10]

Christmas specials are not the regular event that they used to be. However, a new one still occasionally debuts from time to time. I definitely recall seeing the ads for “Robbie the Reindeer: Hooves of Fire” on TV around 2002. At the time, I had no idea that this was actually a British holiday special that had been around for four years at that point. Even more strange, when aired on CBS, the British cast was swapped out with an entirely different American cast. Ben Still, Britney Spears, Jim Belushi, James Wood, and a handful of CBS stars would sub in for a collection of well known British comics and performers. While the American version has been aired again in recent years, I decided to watch the original British version instead.

Robbie the Reindeer is the son of the legendary Rudolph. He heads to the North Pole, at the insistence of his father. There he meets the other reindeer. Like alpha male Blitzen, who despises him, the female Donner, who loves him, and reindeer sexpot Vixen, who is indifferent to him. Robbie quickly discovers the deer's training regiment is not to his liking. Once he realizes he can't coast on his dad's reputation, he starts to train hard for a competition that may earn him a spot on Santa's sled team after all.

“Hooves of Fire” is fairly manic and not in an especially likable way. Only a half-hour long, the special attempts to squeeze in as many laughs as possible. Many of these gags border on the obnoxious. Within minutes of arriving at the camp, Robbie slides down a mountain on a tire and nearly gets his head bashed in. Blitzen's hatred of Robbie is overdone and exaggerated. So is Robbie's infatuation with Vixen. Santa is characterized here as an old man, desperate to be seen as hip. Once Old Jingle, the now senile elder that rains Robbie is introduced, the special gets especially grating. An especially painful bit involves his house sitting on a dangerously steep peak. The special even attempts to squeeze in some edgier jokes for the grown-ups, including a fairly blatant sexual reference.

The funniest gags in “Hooves of Fire” tend to be the smaller ones. As the team chiropractor, Donner just flattens out Robbie's clay out with a rolling pin. Santa discovers its hard to grill at the North Pole, as the hot grill just sinks into the ice. The reindeer games are commented on by a yeti and a snowman, a very bizarre pair of characters who may be a reference to some specific bit of British pop culture. When employed in the toy shop, Robbie creates some bizarre action figures, which made me laugh. Rudolph is never actually mentioned by name, presumably for copyright reasons, so the special writes around this in various amusing ways. The gag that made me laugh the most in “Hooves of Fire” is the surprise appearance of a pop star, playing the animal he happens to share a name with. 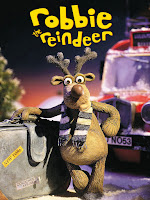 The animation is decent, though the character designs for the female deer are quite awkward. I didn't really dig “Robbie” but it was popular at the time. Two sequels were produced, in 2002 and 2007. Comic Relief was a co-producer on the film, meaning the profits went to charity. That's good, I suppose. The British voice cast at least features some okay performances, especially Steve Coogan as the villainous Blitzen. But I found this one overbearing and a bit obnoxious. I didn't watch the American dub but kind of doubt it significantly improves the quality of the overall project. I suspect it probably makes it worst. [5/10]

This is lovely. keep it up. Thanks for sharing this great post.