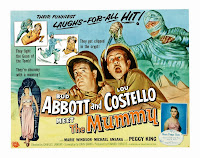 Abbott and Costello Meet the Mummy (1955)

Of the eight primary Universal Monsters, the studio always cared the least about the Mummy. The original is an atmospheric classic but the sequels were strictly by-the-numbers, most following the same outline. Though not without charm, they never rose above the material. Knowing this, it’s not surprising Abbott and Costello didn’t meet the mummy until 1955, long after the duo had peaked and eleven years after the last proper entry in the mummy series

The movie is notable for one thing. It returns the mummy to Egypt. The plot concerns three separate groups interested in the bandaged corpse. A wily female tomb raider in search of treasure, the Followers of Kharis determined to return him to his home, and Bud and Lou who… Kind of just bumble into things. Considering Kharis has been in America for the last three sequels, his followers returning him makes perfect sense. Of course, Kharis is mispronounced “Klaris” through-out and Princess Ananka has become Princess Ara. There’s no mention of Karnak or Arkam. Maybe searching for continuity between films is a fool’s errand. Anyway, a medallion detailing the location of the tomb is the MacGuffin. When Costello swallows it, the two goofballs are forced to come along. Broad, occasionally mummy related shenanigans follow.

This one isn’t up to snuff to the previous “Meet the Monsters” outings. Much of the slap stick is accompanied by annoying sound effects. The sequence where Lou swallows the medallion is especially grating. The bad guys reading the medallions inscriptions by x-raying Lou’s stomach is another dire element. The previous films were certainly silly but they were rarely this stupid. People running into each other or being catapulted through the ceiling are similarly embarrassing. Costello’s scaredy cat gimmick has long worn out its welcome. A long gag involves him running through the temple, encountering an incredibly fake looking skeleton and, bizarrely, a giant iguana. A late period joke with Bud and one of the villainous thugs both dressing as mummies, only to run into the real thing, is tired, overlong, and expected. This isn’t the boys’ best work.

Even the genuinely funny moments are recycled from previous films. The comedic stand-out, a discussion about picks vs. shovels, owes a lot to “Who’s on First.” Lou narrowly avoiding capture by thugs behind walls recall “Meet Frankenstein,” while sheepish discoveries of dead bodies are straight out of “Meet the Killer.” And this is the stuff that’s good. The funny moments that aren’t blatantly recycled seem a little more low-key, like an odd encounter with a verbose women or tomfoolery involving a record player. The laughs are there but everyone feels very tired.

Monster fans are going to be disappointed. Kharis doesn’t start shambling until near the end. The make-up is especially terrible, a rubber mask and non-convincing white bandages. Edwin Parker is no Lon Chaney Jr. He flaps his lips, yells all the time, and even runs at one point. “Abbott and Costello Meet the Mummy” is a low-point in the comedy duos’ career. It’s no wonder it would be their last film for Universal and their second to last all-together. [4/10]

Full Moon Entertainment is uniformly shit these days. Films with bad actors, being murdered by crappy looking puppets, on cheap sets, with lousy make-up and digital effects. And it’s not like the Full Moon “golden age” of the early 1990s produced masterpieces of cinema either. Stripped of nostalgia, even their most polished films are guilty pleasures at best. “Pulse Pounders” was an anthology film shot in 1988, during the waning days of Empire Pictures, when Charlie Band made genuinely good films. The story of how the film was lost until VHS work prints emerged earlier last year is well-known by now. Since Charlie is so bereft of quality productions these days, and wants to milk his fan base for all their worth, instead of releasing “Pulse Pounders” as a whole, the individual segments are given stand-alone releases, first “The Evil Clergyman,” then “Trancers: City of Lost Angels” later this month, and “Dungeonmaster II” sometime next year.

“The Evil Clergyman” is a sexed-up take on one of Lovecraft’s lesser short stories. Taking place on one set with only a cast of five, a woman visits the home of her deceased lover, a clergyman, as you may have guessed from the title, who was of a less then virtuous nature. Over the twenty-seven minute runtime, she is accosted by the spirit of her dead lover, a spirit of his victim, and his human-faced rat familiar.

The movie invites open comparison to “Re-Animator,” featuring Jeffrey Combs, Barbara Crampton, and David Gale. In both films, Gale menaces Crampton while naked, her nude ass getting kissed by the man-faced rat. Charles Band isn’t as strong a filmmaker as Stuart Gordon but does a good job here, making decent use of shadows and space. The cast truly shines. Combs is at his sexiest, seducing Crampton, while his malevolent intent is obvious beneath the surface. David Warner has a fantastic cameo as Combs’ ghostly victim. The highlight of the film is a frenzied Warner monologue, making it clear to Crampton that her boyfriend isn’t a good guy. While Crampton is the lead character, her performance is probably the weakest, with her mostly screaming in fear. Richard Band provides a beautiful longing, sensual, sinister score that feels like it stepped right out of the late eighties.

A simple story, “The Evil Clergyman” prances along at a fine pace, producing some okay atmosphere and even maybe a scare. The ending is delightfully perverse, the moment when you could most be tricked into thinking Stuart Gordon actually did direct this. The presentation is less then idea, the picture grainy and dark, the dialogue sometimes hard to hear over the rest of the sound mix. This is sort of apropos though, considering so many Full Moon films were first watched as grainy VHS tapes. While ultimately a trifle, “The Evil Clergyman” should definitely be seeked out by fans of the studio, the cast, and the adapted author. [7/10] 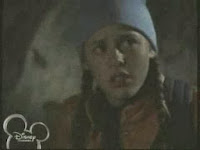 Ah, the Bigfoot episode. Every supernatural mystery show does it eventually. While I usually enjoy Fiona’s theme-establishing monologue that opens each episode, this one is a bit of a spoiler. When the tour bus comes to a Washington state park, Jack and Fi go into the woods looking for Civil War-era ghosts. Instead, she finds Bigfoot. Lucky for her, it’s not one of the murderin’, rapin’ variety, instead a compassionate Sasquatch. So much that he helps her from falling over a cliff and, in the past, took care of a dying Civil War soldier, connecting the two story threads.

Bigfoot, the Civil War, and deforestation might be a bit much for one episode to handle but “Sacrifice” balances everything fairly well. Fi’s one-sided dialogue with the Sasquatch is corny but amusing. The parallels between the soldier’s story and Fiona getting lost in the woods add an extra-layer to the episode. Patrick Levis gets another good moment when Fiona overhears a prayer for her, Jack unaware that she is eavesdropping. That pays off nicely at the end too. The emotion resolution to the episode is excellent, tying the series’ overall theme of family into the specifics of the episode. Though low on thrills, “Sacrifice” is easily the best written episode of “So Weird” thus far. [7/10]
Posted by Bonehead XL at 11:55 PM