It would be unfair to say “Firestarter” was Stephen King’s attempt to recreate “Carrie.” King was hugely successful by that point, enough that he could write anything and Hollywood would immediately turn it into a movie. (Which is what happened with “Firestarter.” The film rights were acquired before the book was even published.) While “Carrie” is a horror character study, “Firestarter” sits more comfortably in the realm of sci-fi thriller, with occasionally grisly special effects. Both books and film adaptations revolve around a young girl with extraordinary power. However, Charlie McGee is eight years younger then Carrie, has a perfectly sane parent, and is on the run from a secret government sect. For all their differences, both stories build towards the girl unleashing her massive powers. All the film that comes before is leading towards Charlie’s psychic-induced climatic rampage.

“Firestarter” is split evenly in two. The first hour is a chase picture. Father Andy and daughter Charlie are on the run from the Shop. The scenes of them fleeing through an airport or hitchhiking pass government agents are decently exciting. These moments are broken up by laden flashbacks that flatly explain the origin of the characters’ powers and why they’re running. At least the blatant exposition is presented visually but they hamper the film’s forward momentum.

After Charlie is captured by the Shop, the pace completely shifts. Charlie is manipulated by psychotic government hit man Rainbird into honing her powers. Like every other secret government agency in cinema history, the Shop wants to use the unstable super being as a weapon. Rainbird is another thin Stephen King villain. The obviously American Indian character, played by obviously Caucasian George C. Scott, believes that he can steal someone’s powers by looking into their eyes at their moment of death. He is obsessed with Charlie’s ability and befriends the girl strictly so he can kill her later. Rainbird has no deeper motivation but the relationship between Scott and Barrymore provides a drive for the second half. The seemingly benign scenes of Scott befriending the girl are laced with a sinister intent. This plotline certainly proves more compelling then Andy’s routine escape plan, the Shop boss’ hand-wrangling or long scenes of Charlie blowing things up in a lab.

“Firestarter” needed stronger performances to succeed. I suspect the involvement of Drew Barrymore, the most popular young actress at the time, is what got the film into active production. It’s not that Barrymore was a bad actress at this time. Her personal moments are quite affecting. You certainly feel sorry for Charlie anytime she cries. However, Drew can’t quite carry the bigger moments. Her emotional outbreaks are unconvincing. Her constant pleas to her powers to “back it off” come off as helplessly hokey. David Keith, who I’ll remind you is not Keith David, does fine, I suppose, but his Southern accent is seriously distracting. Martin Sheen is not a terribly interesting villain and neither is deep-voiced Moses Gunn as a near mad scientist. Art Carney is likable as the kindly old farmer, even if the part is underwritten and Louise Fletcher is wasted as his wife. Only George C. Scott truly impresses. Scott can play gravely maliciousness with ease and he makes Rainbird, otherwise a simplistic figure, captivating to watch. 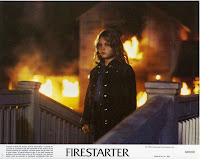 The film was dismissed as a special-effects-fest upon release. No wonder since Charlie’s fireball fueled rampages are the most exciting moments. The ambush on the farm builds nicely. I like the thermostat rising and the butter melting in its dish. The blazing agents and exploding cars are orchestrated fantastically. After watching the girl get pushed around for a solid hour, it’s satisfying to see Charlie burn down the Shop. Men fly through the air, ablaze. Burning trails hunt running agents down. Some of the special effects have aged better then others. Bullets bursting into flames just before her face look cheesy. The Flaming Biscuits of Doom that Charlie explodes a truck and a helicopter with are likely to cause giggles. Still, it’s as effortlessly entertaining as “Firestarter” gets. No surprise that director Mark L. Lester would reinvent himself as an action auteur following this.

With a more even lead and tighter screenplay, “Firestarter” could have been an intense thriller. As it is, the film never reaches its full potentials. If you’re looking for flaming carnage, you’ll get it eventually. The rest of the film doesn’t exactly; I apologize for this, set the screen on fire. [5.5/10]

“Prom Night” took a long road towards becoming a horror series. Seven years after the original, a sequel finally rolled out. The slasher subgenre was played out by then and the original story presented little opportunity for a follow-up. “Hello Mary Lou: Prom Night II” took the series in a radically different direction, one of quasi-comedic supernatural horror. The stories are totally unrelated, connected only by the high school, prom setting. It’s no surprise to read that the screenplay wasn’t written as a sequel at all and was, instead, slapped with the “Prom Night” connection in post.

“Hello Mary Lou” is so much better then you’d expect an in-name-only sequel to a minor slasher flick to be. Its premise is successfully played for both humor and chills, featuring plenty of slimy special effects and an unexpectedly erotic streak. Back in 1957, promiscuous, rebellious prom queen Mary Lou Mahoney was accidentally set ablaze by her jilted boyfriend. Thirty years later, good girl Vicki Carpenter stumbles upon Mary Lou’s tiara in an old store room. Slowly, the vicious spirit of the undead prom queen begins to possess Vicki, once again making prom night a night for terror at Hamilton High.

“Prom Night II” takes it time setting up its premise. The opening flashback is rather brilliantly presented, the camera swooping in and out of an old storage truck at the start and end. Vicki’s eventual corruption by Mary Lou’s spirit is a gradual process. She has disturbing hallucinations during the school day. Some of these are humorous, like the volley ball net transforming into a spider’s web, her teammates turned into pasty-faced zombies. Others are genuinely off-putting and weirdly creepy. In her bedroom, her childhood rocking horse gains red, reptilian eyes and a perversely long tongue. The lunch lady in the cafeteria is suddenly spooning out corpse soup with a side of cockroach. A subtle one has the face of a taunting schoolmate transforming into Mary Lou’s grinning visage. Vicki’s final nightmare sees a chalkboard morphed into a pool of black sludge.

The stand-out moment of “Hello Mary Lou” comes after Vicki is completely taken over by the evil ghost. After her changed behavior annoys a close friend, Vicki-Lou decides to seduce the girl while they’re both in the gym shower. Unexpected for 1987, both actresses show full nudity as light-kissing turns to heavy petting. The audience gets a thrill but the character doesn’t buy it. The stalking scene that follows features no music, only the possessed girl humming a tune, running her hands over the locker doors. The suspense builds nicely and the gory pay-off is impressive. The rest of the movie is more of a campy guilty pleasure but that one moment combines titillation and horror fantastically.

The film mostly plays its supernatural elements for humor. While stabbing a priest to death, the possessed Vicki reflects on the truths of the afterlife. A high school teacher with grabby hands gets his comeuppance comically. The culture clash of a 1950s teenage getting launched into the eighties provides some amusing antics. An attempt to rig the prom queen vote goes awry for the AV nerd, probably the movie’s silliest bit. The film’s jokey side mostly manifest in horror in-jokes. Characters have familiar sounding last names, like Carpenter, Henenlotter, Browning, Craven, Wood, Waters, and O’Bannon. Mary Lou’s climatic reappearance goofs on “Carrie.” There are numerous shout-outs to “The Exorcist.” It’s apparent the film was made by fans of the genre.

Keeping the film sincere among its goofiness and nastiness are surprisingly well-acted and rounded characters. Wendy Lyon is immensely likable as Vicki. Her wide-eyes and innocent good-girl looks gets the audience’s sympathies. Lyon plays a girl loosing her sanity very well. Once possessed, she has no problem playing the other side of the coin. She camps it up fantastically, delivering silly one-liners. Lisa Scrage doesn’t have much screen time but makes an impression as Mary Lou. She’s looks fantastic with her bright blue eyes and tight prom gown. She, too, has a good time playing a campy horror villain. The commitment to character is clear when the subplots that otherwise would have been drool actually hold your attention. Vicki’s best friend has a startlingly confession early on, the camera not cutting away. You wouldn’t expect such a moment of honest emotion in the middle of your trashy horror sequel.

And that’s why “Prom Night II” is awesome. The script is refreshing and smart. The performances are committed and strong. The direction is stylish. The film gets both laughs and scares. This is a sequel that is vastly superior to the original. To this film I say, “Hello Mary Lou, goodbye heart.” [8/10] 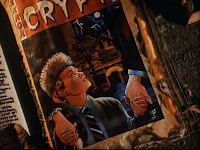 Tales from the Crypt: “The Secret”

If it wasn’t for its frequently bloody or raunchy content, “Tales from the Crypt” would be a kid-friendly horror show. The violence is rarely mean-spirited, the morals are simplistic, and the tone is usually light. “The Secret” is one of the rare episodes that embrace this. The story of an orphan adopted by a mysterious wealthy couple, only to have his face stuffed with sweets and candy, intentionally recalls “Hansel and Gretel.” The boy’s issues are easily understood for younguns. Theodore is bossed around by the mean orphanage mistress. He quickly makes friends with the Colbert’s man-servant just because he’s that nice a kid. He longs to have a loving, friendly family. You’d probably have to be a kid not to see the story’s double-twist coming, which is heavily, obviously foreshadowed. The goofy conclusion mixes that child-like wish fulfillment with just enough nasty gore to make this feel more like “Tales” and less like “Goosebumps.”

None of which are exactly bad things, you see. “The Secret” is handsomely shot, experienced production designer J. Michael Riva contributing an opulent look. Lead actor Mike Simmrin is a bit flat but the supporting cast makes up for it. Grace Zabriskie and William Frankfather go nicely over the top as the wicked foster parents. Larry Drake, in his second “Crypt” appearance, amusingly goes against type as a friendly Alfred / Mr. Belvedere type butler. The final chase scene is a little too silly and light-weight to be suspenseful but comes close enough. “The Secret” takes season two of “Tales from the Crypt” out on a high note, a solid conclusion to a very strong, perhaps the best, season. The host segments recognize this, Crypt Keeper bidding us a fond farewell. See you next September, you undead rascal, you. [7/10]