1931: Greatest year for horror ever? It certainly produced some of the most iconic films of the genre, such as “Dracula,” “Frankenstein,” “Dr. Jekyll and Mr. Hyde,” “M,” and, much further down the list, “Svengali.”

Despite its reputation, “Svengali” isn’t really a horror movie. The story resides squarely in the world of gothic melodrama. George du Maurier’s novel “Trilby” was as much about the bohemian scene of 1850s France as it was about the wicked hypnotist and his attempt to manipulate the beautiful but tone-deaf Trilby into being his personal diva. There’s some of that in the movie, with awkward comic relief coming from the other tenets of the apartment. As you’d expect, Svengali is only one corner of a love triangle. Before coming under the hypnotist’s influence, Trilby is in love with some guy named Billie. Billie is an ineffective hero and does little beside react to those around him. The romance still works, thanks to Marian Marsh’s charming performance. A scene between the two involving a pie is especially memorable. 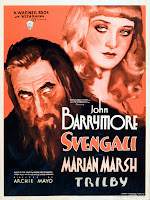 The horrific content is negligible but “Svengali” does pile on some impressive black-and-white atmosphere. A sequence about forty minutes in seriously impresses. The camera spins around Svengali’s room. His eyes have gone completely white, deep in hypnotic trance. We pan out of the apartment, across the city, to Trilby’s home. This visually illustrates the man’s influence over her. It’s also extremely creepy, the wind blowing and a church bell ominously chiming being the only sounds during the scene. It’s hard to tell how much of an influence “Dracula” had on this film but the close-ups on John Barrymore’s eyes glowing as he works his powers seem to purposely recall similar shots of Lugosi in the same year’s film.

Which brings us to the second thing the movie has going for: John Barrymore’s performance. Barrymore establishes the character’s sinister intent early. After seducing another music student, and discovering she’s not as rich as she let on, Svengali hypnotizes her into suicide. However, we only see Barrymore looming over the girl, his back to the camera. He cuts an intimidating figure. His manipulation of Trilby plays out in an especially cruel manner, like in a scene where he reminds her of her promiscuous past. However, he’s not a heartless monster. Svengali legitimately loves her. After hypnotizing her into being his wife, he finds the charade unfulfilling. Mesmerizing the girl takes a great physical toll on the man and eventually cost him his life, his subconscious guilt manifesting itself.

The ending is surprisingly downbeat. The hero proves how useless he is by failing to rescue his lady. Even as he lay dying, Svengali reaches out to his true love. While a little thin, “Svengali” is a moody character study, well shot and with an impressive lead performance. It might not be as strong as some of 1931’s other classics but I liked it all the same. [7/10]

I’ve said it before and I’ll probably say it again: After the original, “Halloween 5: The Revenge of Michael Myers” is my favorite of the series. This is an unpopular opinion. Part five is frequently considered the worse of the series. It’s certainly not a good film in any traditional sense. The script feels rushed and half-formed. The relatively likable Rachel from the previous sequel is quickly killed to make way for Tina, a deeply unlikable final girl. Tina abandons Jaime to go see her asshole boyfriend, her most egregious sin. The previous ending is largely ignored. The movie attempts to forge some sort of mythology around the Myers character, hinting at the Curse of Thorn and all that other bullshit we’d get in part six. The biggest plot hole, for me anyway, is that we see Michael’s face and it isn’t burnt to a crisp. Maybe the Shape has a healing factor? The point is, yes, from any sort of objective perspective, “Halloween 5” isn’t that good a film.

Which has little to do with my enjoyment of it. “Revenge” is, by far, the most agreeably nutty of any of the sequels. There are so many bizarre choices here. Either production was quickly rushed or the director was going for intentional camp. Exhibit A: The comic relief cops which are introduced with honking, clown shoes music. I love the hermit and his screeching parrot that takes Michael in for a year. Did the Shape spend a whole year passed out in a hermit’s hobble? Imagine the fan-fiction that’s been written about that. Michael spends an extended amount of time driving a teenage girl around and letting her kiss all over him. Considering he murdered her anachronistic greaser boyfriend, maybe the Shape was horny. The whole Man in Black business is, of course, utter nonsense. But it’s likable utter nonsense. Of course, no wacky element is more endearing then Donald Pleasence completely sloshed performance as Dr. Loomis. He pushes the character as far as he can this time, pulling a gun on a cop, using innocent Jamie as bait, getting all up in her grill. I absolutely love it.

Rewatching the film this time, I realized another reason I enjoy it so much. Most of the other sequels attempt to recapture Carpenter’s magic. This one, on the other hand, goes for blatant exploitation. It’s the “Halloween” version of a “Friday the 13th” film. The sex is sexier, the gore is gorier. The teens run off for a raunchy Halloween party, even though you’d think the holiday would be verboten in Haddonfield at this point. The one-note supporting characters, the slasher fodder, are far more broad, playing goofy pranks. Michael Myers has basically been transformed into Jason at this point, impaling a fucking couple and using multiple weapons. The most blatant Jason element is when Jaime reaches Michael’s human side, a scene blatantly swiped from “Friday the 13th Part II.” It’s horribly out of character for Myers, of course. He has no human side at all! Don’t care. “Part 5” delivers the trashy thrills you expect from the fourth sequel in a horror series.

The movie is questionable, sure, but I honestly think some elements are very strong. Of all the sequels, this one most captures the autumn spirit to me. The pumpkin carving opening is fantastic. The direction is very strong, the nights thick and black. There are even some genuine thrills. Jaime being stalked by her uncle spirit through the hospital is great. The car chase scene works very well. The laundry chute creates claustrophobic tension. Dr. Loomis delivers another monologue, in which he establishes an inner rage as Michael’s motivation. That’s as good an explanation as any, says I. Surely I can’t be the only one who loves this movie? I perfectly understand why some folks dislike it. By the same accord, I believe its underrated. Not to mention enjoyably goofy. [7/10] 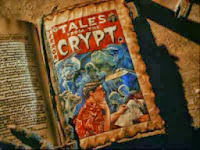 Tales from the Crypt: “Korman’s Kalamity”

“Korman’s Kalamity” is “Tales” at its most winkingly self-aware. It’s about a comic artist who works on a horror comic. When his bitch-hag wife forces him to take wacky fertility drugs, his illustrations start to come to life. This attracts the attention of a lovely female police office who is much nicer then his wife. The artist can’t just work for any old horror comic though. He draws “Tales from the Crypt!” The show is always goofy but this might be taking it too far.

Similarly, the episode’s tone is overly cartoony. Korman’s wife is insanely shrewish. She would have to be, since she’s played by a still hot Colleen Camp. Harry Anderson tries to make his sad-sack main character likable. His usual shtick doesn’t adapt well to the trotted-upon artist. Weirdly, he totally gets away with indirectly murdering his wife at the end, not something you’d expect for this show. Cynthia Gibb is fine, amusing even, as the cop. However, her romantic interest in Korman comes out of nowhere. The two are forced together strictly because the script says so. The whole episode plays like a writer’s self-indulgent wish-fulfillment fantasy. A brief segue into kids having adventures is even worse. The monsters are cool though. I like the mutant fish man and slimy refrigerator zombie. That’s about it for this one. [4/10]
Posted by Bonehead XL at 12:09 PM