When an actor turns to director, you never know what to expect. Usually, an actor’s first crack at directing is an ugly little vanity project. Occasionally, a real classic is born when an actor steps behind the camera. “Frailty” is not exactly a “Night of the Hunter” or “Unforgiven,” but it is an ambitious, surprising directorial debut from veteran character actor and sometimes leading man Bill Paxton.

Told in flashback against the backdrop of a Texas serial killer investigation, “Frailty” is mostly set in the late 1970s. Fenton and Adam live with their single father, a simple man, a car mechanic. Their normal lives are interrupted one night when Dad wakes them in their beds, claiming to have received a vision from God. That he and his sons are chosen as warriors against demons that walk among man. Fenton is terrified, hoping the whole situation is a nightmare, while Adam is faithful to his father. Both boys will have their faiths tested as their father’s actions become more and more extreme.

“Frailty” goes out of its way not to present Paxton’s father character as a religious fanatic. He has a warm, close relationship with both boys. The lack of a mother is not focused on, aside from a picture on a bedside nightstand. The early scenes, of the two brothers talking in bed or the family gathered around the dinner table, establish a relaxed, familial tone. You quickly understand that these three only have each other. Dad’s visions break this safe bubble apart. A parent turned insane or deadly is a primal fear. Two particular moments in “Frailty” plays this up to chilling effect. The next morning, after Dad tells the sons of his vision, Fenton hopes it was only a dream. At first, this might seem the case, as their morning routine progresses normally… Until, as they walk to school, Dad reminds both boys not to mention any of it to anyone. Later on, Fenton tells the local sheriff about the crimes, the unbelieving cop following the boy back to the house. When Paxton turns to his son and asks him if any further investigation is necessary, the film reaches a peak of malevolent atmosphere.

Paxton is a surprisingly self-assured first time filmmaker. He is open about the influence Hitchcock and “Night of the Hunter” had on him, visually quoting from both. His direction is stylish but rarely distracting. The camera moves smoothly, following characters along when needed. When Paxton’s camera becomes more direct, it’s for a reason. Fenton’s run through town, visualized by shooting the actor on a treadmill, or his fall into inner darkness, shown by placing the actor's face on a black mat, deepen the story’s emotion. There are other clever moments, Fenton slipping into shadow or his face crossed over a stone guard dog. Only a Vertigo Shot late in the film is too on-the-nose. Paxton doesn’t back away from invoking classic horror atmosphere with fog or moonlight breaking through trees. “Frailty” looks spectacular.

The film quickly sets its central question up as one of faith. Is Dad insane, like Fenton fears? Is God truly involved in the proceedings? Are the victims innocent bystanders or truly demons in human form? At least at first anyway, “Frailty” leaves things fantastically ambiguous. We have Fenton’s sympathy. He doesn’t know if demons are real but he knows that murder is wrong. However, Paxton is so convincing and so likable as Dad that you can’t help but wonder. The existence of God, demons, the apocalypse, fate, and morality: These are big questions for a scrappy little thriller to address. It handles them all in a mature fashion, always allowing the audience to decide.

At least until the end anyway. In its final minutes, “Frailty” throws away all that sweet, sweet ambiguity. Any time there’s a twist ending, the screenwriter should always ask themselves if the twist reflects on the film’s themes or enriches its story. On one level, “Frailty” succeeds in that regard. The twist changes the way the viewer watches the rest of the movie. However, it’s just plot mechanics. By declaring definitively what happened, what this meant, the ending weakens the overall film. It’s nothing longer a meditation on faith but instead simply a twisting, turning thriller. Fine, sure, but not as exciting. 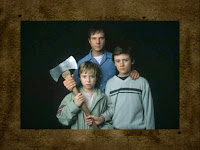 Still, for most of its run time, “Frailty” is an exciting, complex horror-thriller. Paxton and Matt O’Leary are excellent in the lead roles. Jeremy Stumper is a bit flat, playing too much like an insecure child actor. Matthew McConaughey’s voice over is mostly unneeded but the actor nicely plays against his folksy image. Brain Tyler’s score is elegant and quietly ominous. It’s a shame about that reveal because otherwise “Frailty” would have been a true sleeper classic. It’s still a great sleeper but could have been a better one. [8/10] 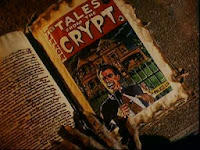 Tales from the Crypt: “Television Terror”

Morton Downey Jr.’s popularity was a bit before my time. To be brutally honesty, before seeing this episode for the first time years ago, I had never heard of the guy. Even before browsing his Wikipedia article, it was easy to figure out that he was some sort of proto-Jerry Springer, Rush Limbaugh shock-jock trash TV host asshole. “Television Terror” has Downey more-or-less playing himself and seems to bet that the audience would like to see him tormented by violent ghosts. The similarly-named Horton Rivers is a trashy talk-show host who decides to film a live broadcast inside a notoriously haunted house. Naturally, this being “Crypt,” the host and the audience get exactly what they ask for.

Unlike most “Crypt” protagonist, Horton is not guilty of any crime worse then being an abrasive jack-ass. Downey’s faux-sincerity is ultimately far more aggravating then his obnoxiousness, which is so clearly put on the audience isn’t offended. The episode mines some okay spooky atmosphere out of the haunted house setting and J. Petter Robinson’s score is genuinely creepy. Any subtly is done away with when the chainsaw comes out though. The tech crew insisting the cameras still rolling while the ghosts attack is a bit of far-too-obvious social commentary. Still, that final image of Downey, disemboweled and swinging by his tie outside the house window, while the preview for next week’s show play, is darkly funny and creepy. Not one of the best “Tales” but it still has some of that ghoulishly ongue-in-cheek flavor that I love about this show. [6/10]

Another urban legend inspired short film from the glory days of USA’s Saturday Nightmares. Like James Dearden’s previous short “The Contraption,” “Panic” is all about slow pacing gently building tension. The story revolves around a model going out for a drive to her next job. The night is rainy and, as she drives through the city, she is accosted by rube punks. Despite the nasty vibes the city puts off, she still decides to stop and pick up an old hitchhiking lady. This turns out to be a mistake.

Not much happens over “Panic’s” 17-minute run time. There are long scene of Mandy just driving around, the synth score droning away. However, the short slowly builds a sense of unease. From the beginning, it feels like the entire world is against our protagonist. The rain beats repetitively at her windows. Nothing happens at first when she picks up the old lady. Still, the driver and the audience feels like there’s definitely something wrong with the elderly woman. The sting in the scorpion’s tail doesn’t come until the very end, the film dragging the tension out as tortuously long as possible. The ending goes for quiet chills instead of abject thrills. The silent eeriness of that final image is destined to stick with you a lot longer then any jump scare would have. James Dearden would later become better known as the screenwriter of “Fatal Attraction” and would, disappointingly, never direct a feature horror film. What a shame, as the guy obviously had the talent for it. [7/10]