Despite its mixed and at times vitriolic reaction, Rob Zombie’s “Halloween” was financially successful. It was one of the few big hits for the fledgling Weinstein Company. A sequel was immediately commissioned. Julien Maury and Alexandre Bustillo of “Inside” fame circled the project for about a year before the Weinsteins finally convinced Zombie to come back. Zombie’s “Halloween II” was quickly written and shot, the Akkad heir giving Zombie full reign to do whatever the hell he wanted. The result was a highly uneven and deeply unpleasant film.

After a highly condensed remake of the original “Halloween II” turns out to be just a nightmare, we join Laurie again a year later. She has been left deeply traumatized by the events of the first film, suffering emotional outburst and screaming profanity. This puts a strain on Sheriff Bracket and Annie, whom she lives with. Michael, despite taking a .357 to the face, also survived that night. For the last year, he has lived in a barn, his mask rotting away, eating stray dogs, and killing anyone stupid enough to mess with him. Dr. Loomis has written another book and become a total asshole, a facile shallow celebrity cliché. As another Halloween approaches, Michael and Laurie are both haunted by bizarre visions of Michael’s dead mom, his younger self, and... A galloping white horse?

The first Zombie “Halloween” film worked best when Rob followed his own muse. His attempts to recreate Carpenter’s classic were less successful. You’d think Rob completely owning a sequel would work out for the best, right? Wrong. “Halloween II’ is grotesque, vulgar, senseless, completely divorced from the source material, and a Rob Zombie movie through and through. This is evident early on when paramedics crack jokes about raping Lynda’s corpse. After an inexplicable collision with a cow, we are treated to a solid two minutes of the driver bleeding from the mouth and repeating the word “fuck” over and over again. In extended close-up, we see Laurie’s bones get set, her wounds clean out, all in sickening detail. Zombie indulges his love of extreme violence, over-the-top profanity, and crude sexual references, far pass the point of acceptability.

The grotesque quality extends to the characters. Laurie Strode is not only unrecognizable compared to the original, she’s completely unlike the character from the last film. She too gets a minute of repeating “fuck.” She screams, swears, pops pills, swigs beers, dances on tables, and raves about parties. She spends the whole movie in a state of emotional distress, her breakdown only growing worse. By the time she finds out that she’s Michael Myers’ sister, she’s gone totally bonkers. Her screaming, nerve-wrought confession to her shrink pushes far pass the audience’s patience. Scout Taylor-Compton’s limited range can’t convey Laurie’s over-exaggerated distress. The audience can’t relate. Worse yet, we can’t like her either. It’s screaming, ranting protagonist is perhaps “Halloween II’s” biggest issue.

The other returning characters undergo serious changes as well. Michael spends large portions of the film unmasked, Tyler Mane with a full beard looking a lot like his director. He wears a ratty hoodie and hides out in the woods. He is motivated by visions of his dead mother, determined to reunite his family in death. He grunts with every stab and, in the video release, even speaks. This is Michael Myers in name only. Dr. Loomis is completely unrecognizable. He is the biggest asshole imaginable, chewing out his beleaguered assistant, demanding obscure tea, and pulling tasteless publicity stunts. Loomis wantonly exploits the victim’s tragedy, something the film hammers into the ground. The doctor’s sudden, last minute change of heart is sloppy writing at its worse. For his part, McDowell hams it up, nearly saving the whole thing. Only Brad Doriff and Danielle Harris, both more comfortable in grounded roles, give good performances.

Zombie’s extreme visual style overwhelms the film. Laurie and Michael share surreal visions. These dreams are overdone and obnoxiously directed. What does a table full of pumpkin-headed ghouls have to do with “Halloween?” Why is Laurie buried by her mother in a glass coffin? The siblings sharing dreams have no justification. The white horse symbolism is so out-of-place and meaningless, the movie needs to justify with a pre-credits info card. Miss Myers’ extended appearance exists mostly so Sheri Moon can be in the movie, I think. The surreal elements are deeply out of place, incredibly distracting, and very annoying. 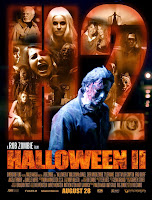 The new characters aren’t very good. Laurie has a new batch of friends that exist to be slaughtered. Harley loves to party and sleep around. Angela Trimbur overdoes it. Brea Grant is slightly better (and very cute) as Mya, who at least feels sympathy for her friend in-between rounds of cursing and partying. Worse yet are the additional victims added to up the body count. Numerous redneck assholes hassle Myers, prompting their deaths. Why would anyone threaten someone who looks like Michael Myers does in this movie? A pair of hicks assaults him on the road, each one a human cartoon. The residents of a strip club are even worse. The owner is possibly mentally disabled. His partner is a hateful bastard. The stripper is exploited and abused. You wonder if Zombie even wants you to like these people. Special guest stars include Howard Hessleman, Margot Kidder, Richard Biehle, Chris Hardwicke, and, most bizarrely, “Weird Al.” Yes, it’s as distracting as it sounds.

“Halloween II” is nihilistic and depressing. It ends with most of its character’s dead, without solace, satisfaction, or catharsis. You come to hate its character’s quickly, the visual style is oppressive, and the violence is far too ugly to be entertaining. John Carpenter’s traditional theme doesn’t appear until the end credits, signaling the film’s total disconnection with the rest of the series. No wonder a third/eleventh installment has stalled. Rob Zombie has made a film so uncompromisingly weird and punishingly ugly that no one would want to follow it up. [4/10]

When people complain about the “Twilight”-ifaction of the classic monsters, I like to point out that Stephenie Meyer did not invent this phenomenon. Cinema isn’t that old a medium. It was only about thirty-so years old when the Universal Monsters came along. It was only twenty-some years later when pop culture overexposure had watered the original horrors down to TV sitcoms, kid cartoons, and breakfast cereals. You can’t trace a path from Lon Chaney Jr. hunting maidens on the foggy moors to Taylor Lautner turning into a big shiny husky without passing through “Teen Wolf,” a fondly remembered bit of ridiculous eighties nostalgia.

The premise is hacky, Hollywood, high concept writing at its best/worst/burst. Scott Howard is a high school student who’s not quite a loser but definitely isn’t cool. He plays, poorly, basketball for his school’s poor basketball team. His friends are weirdoes obsessed with van-surfing who can only get into the good parties by promising to bring booze. His object of desire, the hottest girl in school who is also a drama student somehow, is way out of his league. All of this is confounded when Scott finds out he’s a werewolf. While horrified at first, the powers that come along with the transformations quickly make Scott the most popular kid in school. But, ah, the screenplay implores us, will Scott learn to accept himself for who he truly is?

If that plot synopsis didn’t clue you in, “Teen Wolf’ is an exceptionally dumb movie. Co-written by Jeph Loeb, a frequently terrible comic writer who gets a life-time pass for “Commando,” the movie takes place in that bizarro high school world that only exists in 1980s comedies. One of Scott’s basketball teammates is a big fat guy clearly in his thirties. Even the perpetually youthful Michael J. Fox looks a bit too old for this. Jerry Levine plays Scott’s best friend, Stiles, a really bizarre creation. Aside from the van surfing, he wears obnoxious t-shirts and MCs inexplicable party games, one of which involve two people in their underwear, tied up and covered in whipped cream. The entire premise hinges on the student body finding a kid turning into a werewolf to be the coolest thing ever. That strikes me as somewhat unlikely. Despite this being made in the mid-eighties, the film parodies “Saturday Night Fever” during the prom scene.

Despite its general dumbness, “Teen Wolf” manages to mildly amuse at times. Released the same year as “Back to the Future,” Fox is as charming as ever, making his bizarre character a likable every-kid. Even when Scott’s sudden popularity is suppose to turn him into a huge asshole, Fox makes him immensely likable. Occasionally, the movie’s lame humor catches up with its wacky premise. The basketball couch delivers rambling, heart-to-heart speeches that are in no way helpful. James Hampton is delightfully dead-pan as Scott’s very patience father. The asshole principal subplot pays off nicely. Susan Ursitti is also over-qualified as Scott’s childhood friend. You know the two of them are going to end up together and it’s clear she loves him. However, Ursitti and Fox have great chemistry and she’s likable enough to make the obvious plot mechanics less clunky. 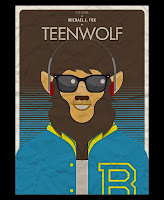 Like all ridiculous high school stories, “Teen Wolf” tries to play its deeply inane premise for drama in the last act. The school turns on the wolf and Scott is forced to prove himself at the final basketball game. It makes the preceding stupidity seems even more stupid in retrospect, no more so then when an overdone ballad plays over the slow-motion end-credits. The werewolf make-up isn’t very good and, considering the tiny budget, it’s no surprise that there’s only one on-screen transformation. The storyline involving Scott’s crush, her douchebag boyfriend, and the drama teacher is terrible. The sometimes homophobic dialogue will probably make you wince. “Teen Wolf” is an occasionally entertaining stupid kid’s movie that’s a bit too raunchy for kids. Aside from a terrible cartoon show and a terrible sequel, the movie would also lend its title to a terrible MTV supernatural romance soap-opera, bringing the “Twilight’ connection full-circle. [6/10]