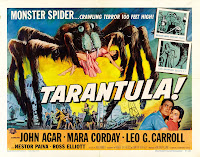 “Tarantula” is the most popular of the post-“Them!” big bug flicks. It follows that movie’s outline closely. Both are set in the Southwest, New Mexico in “Them,” Arizona in “Tarantula.” Both feature cops shooting the giants with machine guns, though with less success here. Both follow a mystery format. Both have detectives, government agents in one, a small town doctor in the other, slowly becoming aware of the giant bug. The big difference is that “Them!” was the ‘40s equivalent of a summer blockbuster. “Tarantula” is a low budget B-flick.

Those expecting cheesy giant spider action from “Tarantula” might be disappointed. Yes, that does happen but the movie has more going on. It’s nearly silent pre-credits scene shows a man, slowly revealed to be deformed, wandering aimlessly through the vast, flat desert, before collapsing dead. The movie is never quite as good as that creepy, stark opening. The giant spider is almost secondary to the plot of a trio of mad scientists, quickly reduced to one. Leo G. Carroll and his collages are of the “good intentions” type. Their experiments in creating giant animals were intended to help solve future food shortages. (Why the scientists planned on feeding the world mouse, guinea pig, or spider meat isn’t explained.) Foolishly, the scientists tested themselves first, slowly giving all three debilitating acromegaly. Just like Rondo Hatton’s Creeper, the condition drives them insane. During a struggle with one of the diseased scientist, the tarantula escapes. The doctor’s subplot dominates the first half before the giant spider finally starts wreaking havoc on Desert Rock, AZ in the second half.

That sounds like a bad thing but it’s not. Learning their lesson form “Revenge of the Creature,” John Agar’s protagonist is actually likable. A wholesome small town doctor, his desire to solve the mystery is born out of empathy for his fellow townsman. His relationship with Mara Corday’s Stephanie “Steve” Clayton is charming. The two have a meet-cute in the post office, facilitated by the clueless town post master. The dialogue is fast-paced, the relationship developing naturally out of the chemistry between the two actors. Similarly, the scientist subplot proves compelling. Partially because of Carroll’s performance, channeling late-period Boris Karloff, but also because of Jack Arnold’s suspenseful direction and Corday’s likability as the endangered lab assistant.

The giant spider stuff might be the least exciting thing about “Tarantula.” People frequently believe this is the movie that introduced the world to the Spider Volkswagen. It’s not. Instead, “Tarantula’s” titular threat is brought to life by placing a normal sized tarantula on miniature sets. This is sometimes effective, the image of a hulking spider barreling down on a comparatively tiny home appropriately squirm-inducing. More often then not, it’s a bit awkward. In order to get the correct number of jumps, the Tarantula crawls on-screen whenever there’s a lull in the pacing.  Amazingly, the characters somehow miss the giant spider right behind them. It crawls across the road the hero just drove down twice and, in the movie’s most absurd scene, hangs outside the heroine’s window for a solid minute, her completely unawares.

The mystery format is likable, with Agar and his country bumpkin law enforcement friends puzzling over horse skeletons or pools of acidic venom. Unfortunately, the sleuthing comes off as silly when the giant fucking spider is probably hiding behind that hill there. The spider is also surprisingly slow, considering its size. The script passes the Idiot Ball around to the victims. One stands there, ineffectually shooting at the giant spider, instead of running away like a reasonable person. A duo of cowboys do run away but one proves clumsy, falling down a lot, forcing his friend help him back up. Lastly, two deputies fall victim to the “car won’t start” cliché, surely one of the earliest uses of that device. Oh yeah, and did I mention the spider can inexplicably roar?

Jack Arnold steals from himself again. The “hand on the shoulder fake-out” gets trotted out for the fourth time. When not super-imposed, the tarantula is a point-of-view monster, its fangs hanging over the camera. A “Black Scorpion” style giant head prop is used, though it’s much better looking then that film’s. The only tarantula attack that works is a late period house munching, the collapsing home created realistically. The movie doesn’t end with the hero stopping the threat single-handed. Instead, the air force apathetically napalms the tarantula into a giant burning mass. (In Agar’s defense, one of those pilots is Clint Eastwood.) The scientist plot is resolved bluntly too, the doctor predictably falling victim to his own creation. “Tarantula” is highly regarded by monster kids, no doubt due to countless late night TV showings. It’s a weird example of a fifties monster movie that is more compelling when the monster isn’t around. [6/10]

“Unmasked Part 25” has got a great premise. The London-lensed film concerns Jackson, an immortal slasher killer who hides his hideously deformed face behind a hockey mask. However, Jackson is tired of the slasher game. Brutally murdering partying, half-naked teenagers has lost its zeal. He’s ready to settle down, find someone who loves him for who he is inside. The film can be summed up as “What if Jason had a midlife crisis?” It’s honestly the kind of story I would have loved as a teenager, when I spent a lot of time writing jokey, splatstick stories about horror archetypes in non-horror scenarios.

Disappointingly, “Unmasked Part 25” doesn’t live up to its fantastic concept. After executing a house of twenty-something partiers, the killer comes upon a blind woman. She starts talking to him, showing no fear, taking him back to her apartment, coaxing him out of his grunting, speechless mindset. At first, a high-pitched, British accent coming from behind a hockey mask is rather amusing. That first encounter between the two, where they bond over their mutual statuses as outcast, Jackson occasionally dropping hints about his particular life-style, is good stuff. If the movie had cut off at the twenty minute point, I would be left with a smile on my face.

Instead, “Unmasked Part 25” rolls on. Jackson talks a lot. He goes on about his childhood with his abusive father, and years in the woods around the camp. He returns home to his dad, who tries to convince him he’s only a monster, even though Jackson thinks he’s in love. He complains about his problems to his dad and girlfriend. A scene where he winds up in a bar with some drunk jerks drags terribly. By playing the maniac’s existential ennui a little too straight, “Unmasked Part 25” becomes a slog. I would hope, if he could talk and reflect on his life, Jason Voorhees wouldn’t be this much of a whiny baby.

The romantic subplot doesn’t quite work either. A scene of Shirley and Jackson out for a stroll through town ends with them in a Halloween costume shop. I think there’s suppose to be jokes there but the sequence is deafeningly dour. We get a peak into the killer’s sex life and learn that his girlfriend is into BDSM, a frankly baffling scene. The script seems to think the premise of “a Jason expy who can’t stand to tie his girlfriend up” is enough to support a protracted, extended sequence, not further jokes required. There’s even a long moment of the guy just walking around London, not doing much.

“Unmasked Part 25” tries to have it both ways. As Friday the 13th rolls around, Jackson is compelled to go on a murderous spree, finding a troupe of drunken Shakespearean actors to slash through. (Rather perversely, the film credits Shakespeare as a screenwriter.) The movie briefly comes alive again as Jackson calls his victims out for partaking in horror clichés as he offs them. The brief moment of the masked killer sighing despondedly, surrounded by mangled corpses, gets a bigger laugh then the entire rest of the film. Once again, the movie goes around to moody and self-serious for the last scene. It’s not Jackson’s brutal murders that make him unlikable but instead his constant whining.

“Unmasked Part 25” will test the patience of most slasher fans. By the standards of grainy VHS-tape low budget slasherdom, the gore is actually quite good. Occasionally, it's pushed to Python-esque levels, which probably should have happened more. Looking at the film, you can see a much wittier, insightful, and far more consistent in there somewhere. Alas. [5/10] 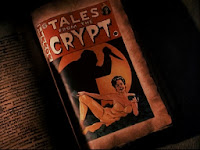 Tales from the Crypt: “Dead Right”

Right from the first second of “Tales from the Crypt: Season Two” things feel more right. The Crypt-Keeper is lankier, speaking faster, dressing up, and telling cornier jokes. Though the darker style of the first season’s host segments was interesting, I’ve got to say I like the guy (Or should that be ghoul?) better this way.

“Dead Right” is an uneven season opener. The episode is low on direct horror, instead playing more like a wacky moral study. It’s biggest attribute is it’s two lead performances. I’ve never been a big fan of Demi Moore but her smokey voice lends itself well to her part here, an amoral gold-digger. She also looks great in some tight, low-cut outfits. Meanwhile, Jeffrey Tambor, as her slobbish suitor, plays disgusting in a very funny way. Under convincing fat make-up, right down to a patchy complexion, he huffs and puffs, selling each line of dialogue as sleazy gold. Neither character is particularly likable but both actors seem to be having a good time. Natalija Nogulich is also amusing as the fortune teller at the center story, who grows more sinister-seeming as the story goes on.

I criticized Howard Deutch’s direction on his previous episode, “Only Sin Deep.” His stylish direction is better suited to a comedic story like this one. Though there’s a retro aesthetic running though out most of the series, “Dead Right” is one of the few episodes explicitly set in the fifties. Cathy and Charlie’s married life is shown in montage, the indignities of everyday life contrasted with the two dancing to Irving Berlin’s “Cheek to Cheek.” It’s a funny, creative angle. You see the episode’s ending coming a mile away, a grim conclusion to an ultimately grim story. Darkly, cynically funny, sure, but not the most likable episode of “Tales.” [6/10]

“So Weird” was no doubt sold to network execs as “The X-Files… For kids!” However, it’s important to note that this was also a post-“Buffy” series. Before that show disappeared up its own mythology-and-melodrama-driven ass, it was about contrasting the personal horrors of teenage life with the archer horrors of demons and monsters. “Escape,” the fifth episode of “So Weird’s” first season, does something similar. The mystery of astral projection is presented through the frame of a girl with pushy but distant parents. The anomalous events are ultimately a way for a girl to escape the pressures of her teenage life.

Astral projection doesn’t sound like a horror premise but this episode actually does a decent job of playing it for thrills. At least, the kind of thrills you’d expect from a decade-old kid’s show. While at a carnival, Jack and Clu both focus on a cute girl. Turns out, they’re actually focusing on a cute girl’s astral form. The direction and music sell the moments of Fiona freaking out when she realizes something strange is afoot. The ending, involving a rickety tree house, is engineered but fits in with the episode’s themes. Cara DeLizia continues to be a talent. She keeps a straight face while on a roller coaster, selling a visual joke excellently. I love how she goes from being frightened by what she encounters to excited about the mystery almost immediately. Anyway, another solid episode from an underrated series. [7/10]
Posted by Bonehead XL at 9:10 PM