As October 1st rolls around, the Halloween season begins in earnest. The weather is still waffling between cool autumn breezes and hotter summer sun around here. Either way, Halloween is well on its way. The decorations are slowly starting to sprout up around my home and the craving for fun-size candy bars is beginning to be irrepressible. What horror flicks do I open October with? The same kind of stuff I've been watching all season. You can't deviate from the plan once you've made it. Anyway... 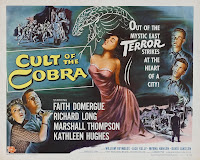 “Cult of the Cobra,” a mysticism-tinged thriller, is not indicative of its era. If the film didn’t have that distinctive fifties shine, you’d think it was a holdover form Universal’s forties monster boom. At the end of World War II, a group of six soldiers are on tour through a vaguely Indian part of Asia. The six sneak into a secret ritual of a snake worshipping cult called the Lamians. (It’s odd that an Indian cult would be named after a Greek monster.) One of them takes a picture, screwing everything up. The soldiers punch their way out and make it back to America. One of the men, Tom, is in love with Julia, his roommate’s fiancée. At least until he meets Lisa, the strange woman next door. Not long after that, the six soldiers begin dying off, the curse coming true.

“Cult of the Cobra” owes more then a little to “Cat People.” Both feature women paranoid about a curse that turns them into deadly animals. In both, the curse disturbs the women’s romantic lives. Unlike “Cat People,” the woman is only a supporting character. “Cult” is more focused on Tom and Paul. Paul is boring, an overly typical B-movie hero. Tom gets attached quickly to Lisa, sometimes acting unreasonable. It’s never explained if Lisa is having some effect on him or if he’s just needy and bitchy. The other four guys are loosely defined. Pete is plucky comic relief. Nick owns a bowling alley. Rico fancies himself a lady’s man. Carl was Rico’s best friend. Paul’s girlfriend is played by Kathleen Hughes, from “It Came from Outer Space.” She is given more to do here then in that film, even if “more” boils down to smiling, looking pleasant in a clingy dress, and being threatened by a rubber snake. The cast is still probably the film’s best attribute.

“Cult of the Cobra” is also nowhere near as good as “Cat People.” The giant snake is mostly kept off-screen, while the men are stalked by a point-of-view monster. These attacks end up being for the best as the snake is played by either a silly hand-puppet or a not convincing rubber model. The movie toys with Lisa not actually being a murderous were-serpent. It’s all for naught, as the story ends up going in the most obvious direction. I guess that’s to be expected, considering every animal that comes across Lisa freaks out, a cliché that is returned to too many times. Special effects in general are limited, as the only transformation we see happens in shadows. The climax is highly underwhelming, a screaming girl menaced by a slow-moving rubber snake, which is disposed of with a scarf and a coat rack. The downbeat epilogue at least sends the film out on a semi-poetic moment.

IMDb and Wikipedia want you to know that each of the men in “Cult of the Cobra” later starred in TV westerns. Despite obviously being a horror film, it is included in the Ultimate Sci-Fi Collection. Possible themes of imperialism or sexual dysfunction are left untapped. “Cult of the Cobra” is an uninvolving thriller that only has the limited charm of its cast to fall back on. [5/10]

Tales from the Crypt: “Lover Come Hack to Me”

“Lover Come Hack to Me” is an episode designed to remind the viewer that this was an HBO show. The plot is typical “Tales.” A douchey asshole marries a rich, homely biddy with the intention of murdering her and inheriting her fortune. As is always the case with “Crypt,” the amoral transgressor is messily punished. Battle axe murder is not the center piece of “Lover Come Hack to Me.” Instead the script is built around the couple’s vigorous honeymoon fucking. While there’s no explicit nudity, the camera lingers on their kissing and bodies intertwining. The screaming orgasm is so intense that the glass in a grandfather clock shatters. I have nothing against graphic fuckery on principal. However, this couple takes away from any erotic appeal. Amanda Plummer is a wonderful actress but nobody’s idea of “sexy,” even when dressed up in slinky lingerie. The ladies might think Stephen Shellen is handsome but his smarmy jerk-ass act is hard to overlook. The episode loves the idea of screaming Amanda Plummer orgasm so much that it does it twice! 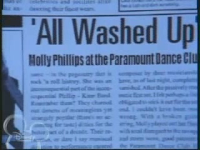 “Web Sight” is not “So Weird” at it’s most impressive. Today’s paranormal event?: Spam e-mail that predicts the future. That sounds less like a supernatural mystery and more like the premise of Adam Sandler’s next comedy. The episode works best when exploring the show’s ensemble. Surfer dude-accented Clu is obviously meant to be the show’s comic relief. Though goofy, Erik von Delton is having fun in the part. His parents and Molly’s road crew, Melinda Metz and Dave “Squatch” Ward, are more naturally charming. The episode mines some okay tension as the ominous predictions slowly come true. The silly set-up is eventually used to facilitate a rumination on the nature of fate. Mackenzie Philips and Carla DeLizia have a touching mother/daughter moment.

Older brother Jack continues to play Scully to Fi’s Mulder. While that’s already a little annoying, at least the series makes it clear that his goading is based out of sibling concern. If just the sound of the dial-up makes you nostalgic, this episode might have you ODing on memories, as the damn static noise is everywhere. I never had AOL, did it really say “You’ve got mail” every time an e-mail came in? Anyway, “Web Sight” is little more what I was expecting from revisiting this show. Even then, it shows signs of promise. [6/10]

“The Brotherhood of Satan” is a singularly creepy movie. I’m surprised I haven’t heard more about it. The opening sets the tone. A toy tank clicks and spins. A car is crushed flat by a very real tank, the family inside screaming. The two are cut together, no explanation provided. After the car is reduced to burning wreckage, a little boy in a cowboy hat calmly walks away, soon joined by a group of other quiet children. There is no music and the whole sequence is shot in either extreme close-ups or wide long shots. The effect is deeply creepy.

“Brotherhood of Satan” is actually packed with spooky imagery like that. A little girl is awoken by her baby doll. Downstairs, her father reads solemnly from the Bible, unaware that his wife is having silent seizure-like spasm right next to him. On its own accord, the doll enters the room. It doesn’t spring to life and attack the man. Instead, the toy simply stares him down, shaking with glee, the man bleeding from the mouth. After the parents are dead, the little girl joins a group of other children, walking off into the foggy night. The doll cries a murky tear.

The movie is disinterested in plot. There is a story. A stout-chinned man, his girlfriend, and eight year old daughter are on a road trip. While stopping through the town of Hillsboro, California, they are attacked by crazed locals. After escaping, their car breaks down outside the town, forcing the three to return. Over a nightmarish pace, we are made privy to a plot by the town’s devil worshipping elderly to kidnap children, sell their souls to Satan, and take up residence in the now lifeless young bodies. The dad and town priest realize this slowly, unaware that the kindly old doctor is the ringleader of the cult. The story is purely functionary and the film outright ignores it at times, focusing instead on eerie imagery. Like a man decapitated in shadow by the sudden a black-clad rider. A child’s birthday party cut together with pictures of dismembered bodies. The red face of a painted devil appearing slowly over a man reading a book. So on and so forth.

The satanic lodge reminds me of “Suspiria,” with its checkered floors, and “The Masque of the Red Death,” with the way the camera glides through the ‘70s puke-green painted walls. The movie is largely without music. Actually, there might not be any music before the fifty-five minute mark. The direction is frequently intentionally askew, creating an otherworldly feeling. There’s even a sick sense of humor, when an elderly couple enter the lodge, pledge allegiance to Satan, and then chit-chat and tell jokes like this is an after-church bingo party.

Like many of the Satanic cult films that followed, and “Rosemary’s Baby” before it, “The Brotherhood of Satan” has a downbeat ending. Character actor Strother Martin screams madly about the devil while his cultists are stabbed to death by black-robed men with flaming swords. Evil triumphs and good arrives too late to stop it. It’s hard to decide if the loose plotting was intentional. Either way, the film sustains a freaky atmosphere of seventies dread and packs a visual wallop. [8/10]