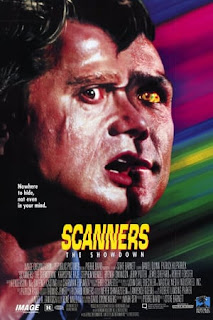 The surprisingly entertaining and clever “Scanner Cop” managed to revive interest in a franchise that was pretty much done after two lackluster sequels. But producer Pierre David couldn't leave well enough alone. The video market was booming at the time and David was producing many low budget, direct-to-video action or horror films to satisfy it. So, for these reasons and more, a sequel followed. Depending on which country you live in, the second “Scanner Cop” movie and the fifth “Scanners” movie overall is known as “Scanners: The Showdown,” “Scanner Cop 2: Volkin's Revenge,” or “Scanner Cop II: The Showdown.”  While I doubt the producer lost much money on the film, no further adventures in mind control or exploding heads would follow.

While the two proper “Scanners” sequels are loose continuations of David Cronenberg's original, at best, “The Showdown” is at least a direct sequel to “Scanner Cop.” Detective Sam Staziak is still working for the Canadian police force. He's taking a new medication that allows him to use his scanning abilities without going insane. He's also attempting to find his mother, whom he's never known. Meanwhile, a remorseless killer and criminal named Karl Volkin escapes from prison. Volkin is also a scanner and an especially powerful one, who can drain the life force from lesser scanners to make himself stronger. He's got a personal grudge against Sam and is determined to ruin his life.

Most of the “Scanners” movies are about a good scanner fighting against an evil scanner. Like “X-Men,” it usually comes down to one party wanting to help humanity and the other wanting to enslave it. “Scanner Cop” refreshingly ditched that concept, letting the psychic hero fight a regular supervillain for once. That idea comes back hard in “Scanner Cop 2.” Once again, we've got a story about two rival scanners chasing after each other, that concludes with a body-horror filled duel. “Volkin's Revenge” combines this idea with another worn-out concept: The cop vs. killer thriller. Stories of rogue cops chasing after demented killers made up roughly ninety percent of the low budget action genre in the nineties. So the sequel certainly lacks freshness.

About the only thing “The Showdown” has to distinguish itself is the franchise's trademark body horror. There's a lot of scanning and mind control in “Scanner Cop 2,” with people and computers. There's also lots of corresponding shots of people starring at each other and making poop faces while the soundtrack drones. Yet the movie brings the creative gore. In an early scene, Sam melts the ears of would-be kidnappers. (One of whom is played by Kane Hodder.) When Volkin drains people's life force, it reduces them to gooey skeletons. This gets more creative as the film goes on, resulting in a couple being twisted into a modern art sculpture or a woman melting through her screen door. The scanner duel features one or two neat gags, like someone having the skin on their face torn off like paper. And, of course, there's an exploding head. Though it might be the weakest exploding head scene in the whole series.

Daniel Quinn is the only reappearing cast member from the first “Scanner Cop,” which I guess is okay. (Though I would've liked to have seen more of Richard Grove, as Sam's father figure.) Quinn plays more of a traditional hero here, his struggle with his powers mostly resolved. He even throws out a few lame one-liners. Co-starring as Volkin is Patrick Killpatrick. The redundantly named Kilpatrick played many bad guys, psychos, and heavies in low budget action flicks. He's certainly intimidating and seems to enjoy hamming it up. However, that's all Kilpatrick brings to the part and Volkin is defined by nothing else. Robert Forester also shows up for a nothing part as Sam's chief.

Mixing up the “Scanners” formula with “Scanner Cop” was a good idea but the sequel falls back on tired out routine. It's a bummer too, as this easily could've been a fun ongoing series. It's doubtful David Cronenberg imagined his head-exploding story would spawn such a long-running franchise, that would bend into so many odd directions. Pierre David would finally give up on the concept after this one, though the remake of the original film is still listed on his IMDb page. [5/10]