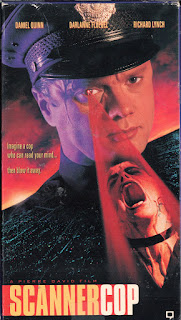 After two lackluster sequels, Piere David had to get creative to continue his crazy dream of making “Scanners” into a lucrative franchise. Each film in the series had moved more and more into the realm of action. The fourth “Scanners” movie would combine David Cronenberg's head-splitting story of warring telepaths with that most evergreen of action subgenres: The cop movie. And, thus, “Scanner Cop” was born. I have no way of knowing how profitable “Scanner Cop” would be but this crazy approach seems to have worked out, at least in the short term. Another sequel would follow and fans, at the very least, seem to hate this one a little less than the others.

When he was a young boy, Samuel Staziak's demented father was killed after attacking some cops. Sam's dad was a scanner and the voices and wild visions drove him crazy. After the only other option was placing him in a cruel mental hospital, Sam would be adopted by Peter Harrigan, the cop on the case. Fifteen years later, Sam has grown up into a cop himself. His scanner powers have been repressed with medication. However, following a series of bizarre cop killings, Peter asks Sam to use his psychic abilities to fight crime. Sam soon uncovers a mad villain brainwashing people into becoming murderers while struggling with his newly found powers.

In 2018, the idea of a cop who can read minds and kill with a thought sounds, frankly, horrifying. 1994, however, was a different time, when we didn't worry so much about the implications of the how fictional cops hunted fictional bad guys. “Scanner Cop” embraces the pulpiness of its ridiculous premise. So Sam psychically interrogates perpetrators. He sees through their eyes, seeing first hand recollections of crimes. He hears thoughts, snipping back at the smart-ass asides people usually keep to themselves. Being a “Scanners” movies, there's plenty of intense glares and pulsating veins too. As silly as it all is, the movie is slightly smarter than you'd expect. The script does grapple with the possibility of Sam abusing his powers, agreeing that mind-reading, nervous system melting cops should probably only be used on special cases.

“Scanner Cop” also has a lot more fun with the franchise's premise than either of the previous sequels. The creature effects are provided by John Carl Buechler and, boy, he presents some wild images. “Scanner Cop” opens with Sam's dad imagines three smaller faces gorily emerging from his forehead. The villain is immune to scanners, because of the metal plate in his head. Sam counteracts this by melting through his skin, revealing the plate, and then blasting the metal out of his skull! And, yes, there's a pretty cool exploding head. “Scanner Cop” also remembers scanners are more telepaths than telekinetics, easing back on the flying bodies seen in the sequel and refocusing on the scanners' ability to interact with computers.

Surprisingly, “Scanner Cop's” goofy plot allows for more horror elements than any previous entry in the series. The villainous Dr. Glock, a former cult leader with a grudge against cops, hypnotizes normal people into being killers. So, whenever the victims see a cop, they imagine their worst fears. This allows the movie to include such sights as ghostly floating corpses in a hospital or a man changing into an enormous, monstrous insect. The film's wildest sequence occurs when Sam mind-melds with Glock's henchwoman just as she's dying. This gives him a vision of Hell, which is depicted as a spooky insane asylum inhabited by monsters. It's pretty far off from David Cronenberg's original but is too nutty not to be enjoyable.

“Scanner Cop” maintains the series' tradition of having wild villains. Richard Lynch, who made a career of playing over-the-top bad guys in B-movies, appears as Glock. Lynch, expectantly, does a great job as a cackling, totally maniacal villain with hilariously vague motivations. Hilary Shepard is also hilarious as Zena, Glock's sidekick who likes to gas random people and give Tarot card readings. Luckily, the movie breaks with the tradition by making the hero pretty likable too. The late Daniel Quinn displays a decent screen presence as Sam, coming off as a normal guy in over his head. I also like Richard Grove as his mentor-like foster parent and Darlanne Fluegel, as the film's not-quite love interest.

I would consider “Scanner Cop” a totally satisfying B-movie experience. I went in with low expectations that the film easily blew pass. That's simply thanks to some really crazy special effects, a deeply goofy plot, decent performances, and a story that didn't make my brain swell. Series steward Pierre David stepped into the director's chair for this one. He actually shows a decent visual eye, making an appropriately atmospheric looking film. I might be slightly overrating “Scanner Cop” simply because it's a lot better than the previous two sequels. Then again, maybe this silly exploitation flick succeeds at its modest goals. [7/10]