By 2010, the David Cronenberg who made weird, cutting edge horror movies was truly gone. His next movie would belong to that most prestige worthy of genres: The biopic. However, this would not be your typical Oscar bait. The film would tell the story of how Sigmund Freud and Carl Jung became friends and then enemies. It was a topic especially well-suited to the director. I was excited enough about the film that it made my list of most anticipated movies of the year back in 2011. However, I had somehow missed watching the film before now. In fact, I haven't seen Cronenberg's last three movies at all.

The year is 1904. Europe is on the verge of war. A young Carl Jung is working at a psychiatric hospital in Zurich. He meets a young new patient, Sabina Spielrein, a young woman suffering from an extreme case of hysteria. Jung is intrigued by Sabina and she soon becomes his assistant. He's also attracted to the girl, who exhibits masochistic sexual desires, but feels loyal to his wife. Jung's work with Spielrein brings him to the attention of Sigmund Freud. The two men become friends. After Jung begins an affair with Sabina, his various relationships grow more complicated.

Throughout his career, David Cronenberg has shown an interest in the workings of the mind. The power of the mind was handled rather literally in “The Brood” and “Scanners.” Through his later films, he tracked the transformative power of the mind. “Dead Ringers,” “Naked Lunch,” “M. Butterfly,” and “Spider” all show perception and thought changing a person's life. So the director making a movie about the historical birth of analytical psychology seems like a natural choice. “A Dangerous Method” foregoes extreme body horror in favor of how an unstable mind can reek havoc on a normal life. Sabina's mental disturbance is enough to disrupt her entire world. Freud and Jung's attempt to bring order to this chaos only reveals their own neurosis and anxieties.

Though you can see a common ancestor in “The Brood,” Cronenberg's last three films were preoccupied with ideas of family. This continues in “A Dangerous Method.” Not just in Jung's relationship with his wife and children but in his relationship with Freud. He refers to the psychoanalyst as a father figure several times. When a rivalry emerges between the two men, there is something – if you'll excuse me here – undeniably Freudian about it. Jung's theories bristle against Freud's, the way a teenage son rebels against a father's rules. Symbolically, he kills Freud, his father figure, when a debate because so heated that Freud collapses. A big part of “A Dangerous Method” is how psychoanalyst reflect their own beliefs when they study their patients. It seems the doctors are not immune from their own syndromes either.

Cronenberg is not the first director you associate with romance. This is a filmmaker's who made a movie full of rowdy, sweaty sex like “Crash” into something detached and scientific. Yet the romances in “The Fly” and “A History of Violence” is a big reason why those movies worked. “A Dangerous Method” seems to balance between the two approaches. Cronenberg examines Jung and Spielrein's sex life distantly. We watch Carl spank and cane Sabina, like a curious scientist observing the odd mating habits of animals. The film also depicts a genuine passion between the two. She leaps into his arms at one point. When she threatens to leave, Jung is on his knees before her, weeping for her to stay. Though kinky and detached, the love story in “A Dangerous Method” is depicted as believably and romantic.

There's another element of “A Dangerous Method” that is especially interesting, when its director's entire career is taken into account. David Cronenberg is Jewish. It's not something that comes up a lot in his movies, which reflect the director's more atheistic, scientific side. Through the also Jewish Sigmund Freud, Cronenberg delivers his thoughts on his own heritage for the first time. Freud says his Jewishness makes him an outsider among the scientific community of the day. That it's another reason for the establishment to question and disregard his theories. Sabina is also Jewish. This stands in contrast to Jung, who was raised Protestant and is even described as Aryan throughout the film. This isn't just another way to set the two shrinks apart, it also puts many of the outsiders from Cronenberg's films in a different context. Narrative outsiders can now be seen to stand in for cultural outsiders. 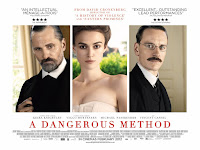 Starring as Carl Jung is Michael Fassbender. When given some nerdy glasses and a reedy mustache, Fassbender rather resembles Jung. The actor turns his trademark intensity inward. Jung has questions and theories. However, the anxieties and conflicts he feels are building up inside. By the film's end, Jung is on the verge of a nervous breakdown. Fassbender is extremely good at showing how on-edge the young psychoanalyst is. The final shot of the movie, of Jung sitting in a chair and subtly quivering, is powerful strictly because of how much Fassbender implies with his face and body language.

With “A Dangerous Method,” Cronenberg made his third collaboration in a row with Viggo Mortenson. That's pretty unusual for a director who rarely reuses his leading men but his relationship with Mortenson was clearly fruitful. Freud is a very different part than Tom Stall or Nikolai Luzhin. The aging academic is increasingly stuck in his ways, unable to deviate from his own theories. Mortenson shows both how charming and frustrating a person in Freud's position could be. He's brilliant and charismatic but also stubborn and dogmatic. It's a strong performance from Mortenson. Smartly, he doesn't attempt the iconic professor's famous accent, allowing his Freud to speak clearly.

The harshest criticisms of “A Dangerous Method” were saved for Keira Knightly. As Sabina Speilrein, Knightly does adopt a not entirely convincing Russian accent. It's an extreme performance in other ways. During her treatment with Jung, Knightly depicts Sabina shaking and contorting out of control. (It's the most classically Cronenbergian element of the film, Sabina's mental illness causing her to loose control of her body.) This approach, however, works for me. Knightly never looses sight of Sabina's human element, which is more apparent after the character calms down some. Yet the intensity of the early scenes seem properly calculated for the material.

Also returning from “Eastern Promsies” is Vincent Cassel. Cassel plays another prominent figure from psychological history, Otto Gross. Cassel brings a similar unhinged quality to this part that he did to “Eastern Promises,” making the character seem dangerous. His Gross is a man of unbridled appetite, who uses drugs and women as he see fits. Also appearing in the film is Sarah Gaddon as Emma Jung. Gaddon probably has the least glamorous part in the film, playing a subservient wife. Yet it's an important role, showing how different Sabina is to what Jung is used to at home.

Visually, “A Dangerous Method” is Cronenberg's most handsome film yet. Peter Suschitzky has made Cronenberg's last eight movies look really pretty but he outdoes himself here. The film is largely defined by a clear, white color pallet. This seems to recall the sterile living conditions of a medical office. It's apparent in the white marble statues that Freud seems to surround himself with. Suchitzky also makes the darker moments, set inside the shadowy rooms of the mental clinic, look distinctive and interesting as well.

“A Dangerous Method” was based on two separate source materials. A non-fiction book called “A Most Dangerous Method” by John Kerr and a play, “The Talking Cure” by Christopher Hampton. The film's stagebound roots are quite evident at times. Cronenberg absolutely brings a cinematic approach to the material. His use of the camera is effective, especially during Jung and Sabina's love scenes. But it's hard to miss that most of “A Dangerous Method” is composed of people standing in rooms and talking to each other. There's even a pretty bad CGI shot of Freud and Jung looking out at Manhattan as their boat arrives in the U.S.

As with the director's last two films, “A Dangerous Method” was well reviewed. It was even poised to be an awards contender. For whatever reason, the movie didn't connect with Academy voters and was totally left out of the nominations. (Mortenson was nominated for a Golden Globe.) In fact, “A Dangerous Method” was largely overlooked, earning very little attention in general. However, it's an interesting film, well act and full of challenging ideas, as well as being the culmination of the director's interest in psychoanalysis. If nothing else, it's a lot better than “Eastern Promises.” [Grade: B]