David Cronenberg's first two movies were met with very little positive critical attention. “Shivers” was greeted with public outrage, most critics treating it as a vomitorium of a movie. “Rabid” was widely dismissed as just an exploitation movie. Cronenberg's third horror movie, and his sixth feature over all, would received a more divisive reaction. “The Brood” was treated like garbage by some, including Leonard Maltin, who gave it a “bomb” rating. Other people, however, would have brighter words for the film. No less an authority than Stephen King would highly recommend the movie in his 1981 book, “Danse Macabre.” Over the years, “The Brood's” reputation has grown. It is widely considered Cronenberg's breakthrough film, taking him from the grindhouse to more respectable avenues.

Frank Carveth, a few years ago, went through a dire divorce from his wife, Nora. After one of her weekend visits with Nora, Frank discovers their daughter, Candice, has bruises up and down her back. Concerned, Frank discovers Nora is now living at a clinic run by Dr. Hal Raglan. Raglan practices a controversial form of psychiatry called psychoplasmics, that allows his patient's mental turmoil to manifests as physical aliments. The deeply troubled Nora is his favorite. Her anger soon takes the form of small, deformed children. They hunt down the targets of Nora's rage and brutally attack them. Now, Frank must protect their daughter from Nora's fearsome brood.

Cronenberg has been opened about “The Brood's” inspiration. The same year “The Brood” was released, Cronenberg's divorce from his first wife was finalized. A harsh custody battle for their daughter was playing out while he was writing the script. The director has referred to the film as his version of “Kramer vs. Kramer.” So it's fair to read “The Brood” as a highly personal movie about divorce. Frank and Nora's relationship has been over for quite some time. However, a great deal of hurt and resentment still boils between him and his ex-wire. When the question of their daughter's safety comes up, he begins to see Nora as is enemy. In the end, the only thing he can do to protect his child is to kill Nora. It's pretty obvious that Cronenberg funnel a lot of his personal anger and frustration with his ex-wife in “The Brood.”

So the first time I saw “The Brood,” I thought it was a movie about divorce. As I've watched the film more, I've realized it's really a movie about parenthood. The very first scene has one of Dr. Raglan role-playing with a patient, who calls him “Daddy” and works through the abuse he suffered at his father's hand. (After Raglan abandons him, his desperate for anyone to become his surrogate Daddy.) At first, Nora directs her anger at her mother, who hit her, and then her father, who allowed it to happened. Hanging over the entire film is Candice, the innocent who is being tormented and torn apart by her parents' conflict. The film's final image is of her, silent and crying, traumatized by the horrifying experience. The titular brood are, as well, a twisted symbol of Nora's status as a mother. “The Brood” is a film explicitly concerned with the psychological damage parents can reap on their children, knowingly and otherwise.

Excluding “Fast Company,” Cronenberg's first five movies all deal with mad scientists, in one form or another. “The Brood” features a far rarer breed: A mad psychologist. The exact way Raglan's methods cause people's mental problems to manifest physically is never explained. Raglan is portrayed sympathetically, if a bit selfish, seemingly surprised by how far his own methods can go. Moreover, the film allows Cronenberg to combine his trademark body horror with his growing interest in psychology. In “The Brood,” the mental is the physical. A man's self-loathing gives him skin cancer. Whelps and poxes appear in place of psychic scars. Nora's parthenogenetically birthed children represent and are driven by her anger. They come from within: Both the feelings and the monsters they spawn. “The Brood” continues to show the director's interest in making the internal external.

Putting aside all the thematic concerns, “The Brood” is simply David Cronenberg's scariest movie up to this point. He puts more effort than ever before to building up to wrathful attack sequences. The attack on Nora's mother begins with strange noises in the walls. Milk and orange juice are tossed from the fridge, mixing on the floor. This proceeds an intense and violent attack with a meat tenderizer. The film tops this moment with a later moment of shocking horror, when three members of the brood – wearing red hooded jackets, like something out of “Don't Look Now” – bludgeon a kindergarten teacher to death in front of her kids. Yet the scariest scene in “The Brood” occurs when Nora's father is attacked. One of the mutant off-spring leaps out from under a bed, a childhood monster come to life. He then beats the dad to death with two glass globes.

There are symbols to these scenes – milk for motherhood, glass balls for fatherly testicles – but the pure ferocity Cronenberg brings to these moments are more important. The editing is quick, focusing on the victims as they struggle and squirm. The gore is intense, the injuries being believable and painful. Fittingly, there is a real anger to how these moments are directed. This ferocity becomes more apparent the closer the film draws to its conclusion. The ckimax takes the film's body horror to its most disturbing extreme, when we see Nora birth and clean one of her children. It also takes the film's violence even further, when Oliver Reed is torn apart by the monstrous children. Even more startling is how suddenly the violence all ends, once Frank chokes the life out of his ex-wife.

In the past, Cronenberg has had trouble getting decent performances out of his leading men. At first, I worried “The Brood” might have this problem. Art Hindle's performance as Frank is, initially, a little hard to read. He seems gruff and standoffish. However, as the story goes on, Hindle's performance opens up more. The emotion at the center of the character grows more and more important. Soon, Hindle channels an anger of his own, even if it's directed at protecting his child. Though it takes a while, Hindle's performance eventually reveals itself as thoughtful and driven.

As decent as Hindle is, Samantha Eggar dominates the film. As Nora, she seems like an exposed nerve. She rants and raves, alternating between screams of rage and childish weeping. As Nora becomes more defined by her anger, Eggar's performance becomes increasingly frightening. No wonder her rage gives birth, as Eggar makes Nora's anger propulsive and powerful. At the same time, Eggar never looses track of Nora's humanity. She keeps the character sympathetic. She may be giving birth to monsters but she was made that way by years of abuse and manipulation. She's rather like a child herself, reacting with high-strung emotions before anything else. It's a startling, effective performance and undoubtedly the heart of the movie. 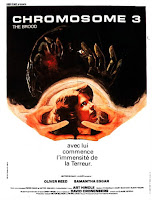 Oliver Reed was given top-billing in “The Brood,” since he's probably the biggest name in the movie. Raglan's confrontational treatment allows Reed to be as blustery as he wants. Such as in the first scene, where he insults and stripes down poor Michael. Reed is very good at this but he also gives Raglan a conscience. He feels responsible for his patients and blames himself when things get out of hand. Gary McKeehan, as the utterly helpless Mike, is especially pathetic and sad. Robert A. Silverman has a memorable role as Jan, the man given cancer by his own self-loathing. Though a small part, Silverman manages to give the character a grimly sardonic outlook on life, adding some humor to an otherwise grim picture.

“The Brood” also shows Cronenberg's visual techniques improving. This is the director's prettiest film thus far. The film's snowy Toronto setting lends a chilly atmosphere to the proceedings. Cronenberg pulls together moments of odd beauty throughout “The Brood.” Such as Raglan's clinic looming large in the distance, almost painted blue in the winter afternoon. A memorable moment occurs when one of the brood children draws its bloody hands away from stair banisters, leaving perfect hand prints behind. Later, two of the brood children escort Candice down a snowy road, back to her mother, another unusually picturesque moment. For being such an intense horror movie, “The Brood” is unusually pretty at times.

“The Brood” would mark an important first collaboration for Cronenberg. This would be the first time Howard Shore would compose the music for his films. Compared to the somewhat forgettable scores in his last two horror films, it's like night and day. Shore brings shrieking strings and foreboding low tones to the movie, bringing a sense of creeping dread and panicking horror to many scenes. Shore's score also has moments of haunting beauty. The ending theme carries the same sense of unease and foreboding but with a more lingering melody. Shore would go on to score almost all of Cronenberg's films, so clearly it was a relationship that worked. 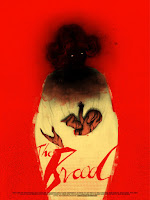 “Shivers” and “Rabid” were certainly effective films but both came off as slightly raw, at times. “The Brood” is a much more confident horror movie. It's scares are visceral and punishing. An intense experience, the film is also one made with feeling and thoughtfulness. Like far too many horror cult classics, there was even rumblings of a remake at one point. I think a new version of “The Brood” could have potential, especially in a world more aware of emotional trauma than ever before. But that remake was going to be made by professional hack Breck Eisner, so I'm pretty happy nothing came of it. As for the original, it's the first of the director's film to be an unbridled success. [Grade: A]