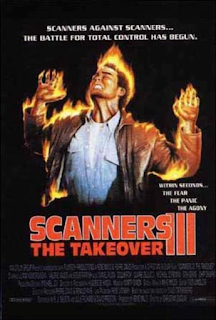 Producer Pierre David was determined to cash in on “Scanners'” enduring cult appeal as much as possible. I have no proof that “Scanners II” and “Scanners III: The Takeover” were shot back-to-back. However, the sequels were released in the same year. They were both directed by Christian Duguay and share a few of the same cast members. If not immediately afterwards, the third film was obviously produced very quickly after the second. As this Canadian psychic/action/sci-fi/horror franchise continued into its third part, it strayed further and further from David Cronenberg's original vision.

In fact, aside from the concept of super powerful psychics known as scanners, “The Takeover” is totally unconnected to Cronenberg's film. Alex and Helena, both scanners, were adopted by Elton Monet, the head of a pharmaceutical company that has been searching for a cure the scanner condition. At a Christmas party, while demonstrating his abilities, Alex accidentally causes the death of a friend. He retreats to a Tibetan monastery, determined to learn how to control his powers. Back home, Helena steals a drug from her dad that is supposed to ease scanners' pain. Instead, the patch stripes away Helena's morality and increases her abilities. Soon, she's wildly abusing her psychic powers and plotting world domination. Alex has to return home to stop his sister.

“The Takeover” continues the series' tradition of over-the-top villains and boring heroes. Steve Parrish, who has only appeared in six other films, is fairly flat as Alex. His inner struggle, between his desire to be a normal human and his scanner nature, is resolved about halfway through the film, leaving the actor nothing else to do besides react to the other characters around him. Lilana Komorowska, as Helena, is far more entertaining. Once the drug takes over, Helena becomes a ridiculous supervillain. Her natural Polish accent even fits the cartoonishly evil character. Komorowska vamps or hams it up in nearly every scene. She laughs wickedly, cracks one-liners, disposes of her rivals and enemies. She even seduces a guy she thinks is cute, just because she can. It's a supremely silly performance but the actress is having such visible fun that it elevates the otherwise dire material. (Komorowska, by the way, would marry the director.)

Helena has a bit more screen time than Alex, who disappears for about half-an-hour following the opening scene, which is good for “Scanners III.” Whenever the focus turns to the hero, the movie falls into a sluggish slump. Alex is given an utterly routine romantic subplot with Joyce, played by Valerie Valois, a friend and co-worker of his sister. The two are introduced as lovers. By the time Alex re-enters the film, I honestly forgot about this. So I was a little confused when Valois and Parrish immediately fall back into bed. The two actors have no chemistry and the subplot adds pretty much nothing to the story. It seems clear it was introduced to get a little more gratuitous T&A into the film and to give Alex another reason to stick around.

Duguay's direction for “Scanners II” was frequently melodramatic. He doubles down for the sequel. The trick of people being tossed across the room psychically, while the camera focuses on their screaming faces, is repeated here. For most of the scanner fights, Duguay utilizes the cheaper tactic of actors making constipated faces, tossing their heads back and forth, and adding swooshing sounds on the soundtrack. Most of Duguay's credits are in low budget action films. He incorporates some of those tactics into “Scanners III.” While in Tibet, an evil scanner mind-controls a trio of kickboxers into attacking Alex. There's a fairly uninspired motorcycle chase, a rooftop shoot-out, and several explosions. One explosion occurs when a small motorized cart collides with a wooden crate, a poorly executed moment that made me laugh.

This is not the only moment of unintentional comedy in “Scanners III.” One of Helena's minions is a buxom blonde nurse, sent to seduce Alex. This leads to her other henchmen, ridiculous goons in black suits, attempting to brainwash him in some weird machine. Of course, it wouldn't be “Scanners” movie without some exploding heads. The film's first is its best, when Helena tortures her old doctor, causing his eyeballs to bulge, before bursting his cranium. Later, Alex explodes a bad guy's head underwater, a sillier scene. The goofiest scene in the movie occurs when Alex traps the lead henchman in a revolving door, squishing his face against the glass until his head splatters. That's more memorable than the final scanner dual, which features more dramatic glances, a laser beam, and ends with a ridiculous electrocution. There's also an inexplicable scene of someone casually having their arm blown off, a really oddly framed moment.

“Scanners III: The Takeover” is a slight improvement over “Scanners II.” The sequel is extremely silly – the subtitle is referring less to Helena's attempted global takeover and more to her corporate takeover of her dad's company – and that campiness adds a certain entertainment value. However, the sequel is ultimately still a very mediocre experience. For every hilarious moment, there's two or three that drag. It's hard to see any connection between this bland exploitation product and Cronenberg's original, which had it's own problems but was still daring and innovative. [5/10]