3. Shivers
They Came from Within

Following the completion of “Stereo” and “Crimes of the Future,” David Cronenberg was ready to make his debut as a commercial filmmaker. Cronenberg chose to work in one of the most profitable genres: Horror, which his previous work already bordered. To achieve this goal, he partnered with Ivan Reitman, another Canadian filmmaker who would break into Hollywood a decade later. Written as “Orgy of the Blood Parasites,” the film was called “Shivers” in Canada and “They Came from Within” in the United States. (An alternate title the director would later say he preferred.) The result, though still pretty rough when compared to his later work, would become a commercial success and launch David Cronenberg's career as a horror director.

Starliner Towers is a scenic apartment building on an isolated island. Top-of-the-line, the building has its own doctor's office, shopping center, and swimming pool. This scenic location is disrupted when an old man violently murders a teenage school girl, before killing himself. The man was a scientist. His latest experiment was a parasite, genetically designed to replace failing organs. The parasite, however, had the unforeseen side effect of making sexual desires grow out of control. The parasite is also on the loose in the apartment. Dr. St. Luc, the building's resident physician, investigate the mystery as the disease spreads among the tenants. Soon, Starliner is overtaken by sex-crazed attackers.

Cronenberg's first two films were built on high-minded ideas. That message might not have always been clear but Dave was clearly going for something with those two films. With “Shivers,” commerce meets pretensions. Cronenberg knew that, if he was going to make it as a director, he had to make commercially successful films. So he packs “Shivers” full of sex and violence, transitioning from arthouse dabbler to full-blown exploitation filmmaker. Yet the director successfully has it both ways. “Shivers” features many of the concepts Cronenberg had previously worked with: Disease, mutation, the ethics of extreme science. There's even some of the interest in architecture he previously showed, as “Shivers” spends a lot of time focusing on the ins-and-outs of the Starliner Tower. 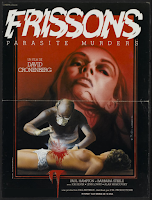 After coming close with “Crimes of the Future,” “Shivers” is Cronenberg graduating to full-blown body horror. It's evident from the movie's early scenes. Within minutes, we see Nick probing at his stomach. It soon becomes apparent that something is pulsating inside him. “Shivers” is full of scenes of malignant masses vibrating under the skin, trying to push its way out. It's also a movie preoccupied with the invasion of the body, as any open orifice is a passageway for the parasite. The parasite itself is an example too. Not merely a worm, the parasite – both phallic and fecal in appearance – is am engineered organ allowed to squirm around on its own. It rather literally gets under your skin, in a visceral way that is unique to Cronenberg.

“Shivers” is also the director putting a decidedly kinky take on a tried-and-true horror genre. “Shivers” is essentially a zombie movie. However, these determined ghouls do not devour humans. Sex is what they crave. This re-characterizes the hallmarks of the zombie genre – the pathogen passing from person to person – as a sexually transmitted disease. Considering the blood hungry moans of hungry zombies sound awfully similar to someone in the throes of orgasm, I'm surprised no one had made this connection before. By deriving horror from horny zombies driven mad by desire, Cronenberg also re-contextualizes the sexual freedom of the swinging seventies. “Shivers” shows a world where sexual desire can run completely unchecked. And it's a disturbing sight.

“Shivers” shows that Cronenberg still hadn't entirely overcome some of the weaknesses of his student films. Like “Stereo,” the film film lacks a proper protagonist. Dr. St. Luc emerges as the story's hero. He's the one investing the origin of the parasite. He's the person the film follows as the apartment descends into chaos. However, St. Luc and his girlfriend are off-screen for long stretches. The Tudors takes up nearly as much screen time, especially Janine's struggles as Nick becomes more and more inhuman. The film also covers some of the other residents of the Starliner, increasingly spreading itself a bit thin. “Shivers” doesn't have an ensemble cast so much as an uncertain screenplay.

Cronenberg has no qualms about making a horror though, that's for sure. “Shivers” delivers several startling horror sequences. That opening – a man strangling and disemboweling a schoolgirl before slashing his own throat – is a hell of a way to start a movie. Another suspenseful sequence has the parasite leaping from behind a washer to attack an unsuspecting old woman. There's graphic gore, like when Nick slashes Dr. Linsky to bloody shreds. There's sexual violence, during the infamous scene where the parasite, uh, enters Barbara Steele in the bathtub. Yet shock value is not Cronenberg's only tool. A scene devoted to St. Luc running through a hallway, which quickly fills up with mad deviants, is well orchestrated in its chaos. The scenes of pulsating skin, such as when the parasite passes between Janine and Bettis, are equally unnerving.

Not every horror sequence works so well. The scene where Nurse Forsythe is attacked in her apartment is awkwardly framed. A later attack in the parking garage, by a black security guard turned homicidal zombie, is set up in such a way that it has littler suspense. “Shivers” does a decent job of using sex as a subject of fear. However, the way it fully leaps into deviancy in the last third is sometimes more funny than scary. The sudden sight of young girls being led around on leashes and acting like dogs, or St. Luc walking in an old man who then casually makes out with his daughter, sometimes produce chuckles just due to the outrageousness of these acts.

Being a low-budget genre film made in Canada, “Shivers” does not feature very many well-known actors. Barbara Steele, who was given top-billing on some international posters, plays Bettis, Janine's friend and neighbor. Steele does a good job of implying the desire the character feels for Janine without overdoing it. Naturally, Steele's piercing eyes are put to good use once she becomes a parasite-infected monster. Joe Silver, baritone voiced character actor, plays Dr. Linsky. Silver brings a surprising amount of humor to the part but also panics extremely well once he's faced with how extreme the outbreak gets. Lynn Lowery was hardly a well-known name in 1975. But horror fans might've recognized her, if they had seen “I Drink Your Blood” or “The Crazies.” Lowery, sadly, seems to strike an unearthly, stunned attitude for most of the movie.

A lot of the performances in “Shivers” have this problem. Paul Hampton is similarly flat as. Dr. St. Luc. He navigates through most of the movie with the same expression on his face, rarely reacting to anything with more than a sideways glance. Alan Migicovsky, as Nick Tudor, also affects a dazed voice and largely blank facial expression. Though that was likely intentional on his behalf, considering the character is changing into something inhuman. Of the residents of the apartment, only Susan Petrie as Janine seems really alive. She weeps and threats, torn apart by the horror she soon experiences.

Though ahead of the curve in some ways, “Shivers” is, ultimately, a product of its time. The film's treatment of women strikes a modern viewer as somewhat reductive. The teenage school girl that dies violently is largely blamed for the outbreak. Her sexual promiscuity spread the parasite throughout the Starliner. Later, Nurse Forsythe is repeatedly the victim of attacks by men. After she's infected, her boyfriend punches her in the face. There are other slightly uncomfortable moments. Like a scene of mincing gay men stalking the apartment's hallways. There's only two black characters in the film. The man is a violent brute who attacks a white women. The woman is herself a victim, her naked body put on display. It's largely unintentional, I'm sure, but makes a modern viewer a little uneasy.

Another problem facing “Shivers” is a somewhat weak conclusion. The last act quickly becomes chaotic. The film quickly devolves into scene after scene of St. Luc running through the apartment, encountering one sexual horror after another. This goes on until he nearly escapes, finally being infected in the apartment swimming pool. (Cronenberg throws in some tacky slow motion during this scene, another issue.) “Shivers” tries to conclude on a chilling note, with a quiet final scene. After so much shouted chaos, that moment simply isn't as unsettling as the filmmakers were hoping. 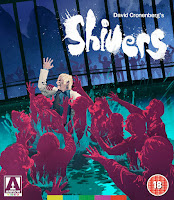 “Shivers'” content, its intense mixture of sex and violence, was controversial in Canada. Primarily because it was partially funded by the government. When it came out that (a likely small percentage of) tax payers' dollars went to such a graphic film, some people were pretty upset. This controversy was somewhat off-set by “Shivers” becoming the first film funded by the Canadian Film Development Corporation to actually turn a profit. As far as proper debuts go, “Shivers” definitely has some major flaws. However, when it works, it works really well. The shocking scenes are effective enough to elevate all of “Shivers.” [Grade: B]