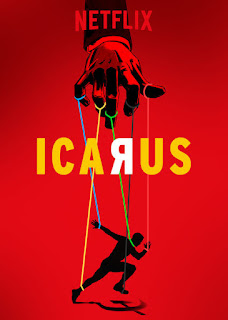 Can someone explain to me what the big deal about doping in professional sports is? It's probably because I've never, ever given a shit about sports but I don't get the outrage. Oh yes, pro-sports are suppose to be about athletics and fairness. But, come on, people actually watch sports to see peak-level athletes pull off insane feats. Doesn't doping make these crowd-pleasing moments of superhuman aptitude more plausible? Why can't we humans use science to make ourselves as god-like as possible? We all know they all do it anyway. Luckily, for plebs like myself that simply don't understand the problem, here's a documentary to explain why doping in athletics is so bad. “Icarus” is another Oscar-nominated doc from Netflix concerning Russia's attempt to rig the 2014 Olympics by pumping their guys full of super-juice. Russia sure likes rigging things, don't they?

Documentary filmmaker Bryan Fogel had an idea. Despite training hard, he does poorly in a bike race. After hearing about the Lance Armstrong steroid abuse scandal, he decides to start doing drugs to see how this improves his abilities. He contacts Dr. Grigory Rodchenkov, the scientist responsible for monitoring Olympic athletics doping in Russia. What began as an idea for a documentary takes a hard turn when Rodchenkov reveals that Russia has been doping its athletes for years. Soon, the doctor had made himself an international target. 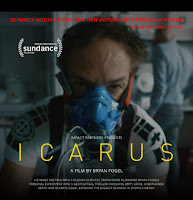 “Icarus” begins as one type of movie before radically shifting gears and becoming a totally different movie. You'll have to excuse me for thinking the first movie is way more interesting. Fogel totally throws morality and fairness out the window, in hopes of seeing how it'll effect his chances. I think we've all wondered about giving ourselves unfair advantages like that, whether the physical changes and tolls would be worth the benefit. Considering Fogel actually ends up doing even worse after doping than he did before, I guess “Icarus” proves that cheaters never prosper. This also leads him to having an odd friendship with Rodchenkov. The Russian doctor, for some reason, almost never wears a shirt. The two chat over the internet and talk about their dogs. It's pretty funny.

Of course, “Icarus” was not destined to be about more general, relatable human truths like that. Instead, the film quickly becomes about international scandal and political intrigue. Some guy named Dick Pound shows up multiple times. A colleague of Rodchenkov dies mysteriously, from a heart attack that looks a lot like a homicide. Grigory makes himself a target, eventually fleeing Russia and undergoing great scrutiny to bring the truth – that Russia is hella into doping – to light. I didn't find this compelling at all. The specifics of Russia's scam are shocking dull. Considering the insane lengths athletes will go to cheat, their method essentially boiled down to trading dirty piss for clean piss. Dr. Rodchenkov seems like a nice guy but the shift from the small and personal to the huge and global gives the viewer whiplash.

For a documentary, “Icarus” is pretty over-edited. Fogel resists making his film a series of talking heads. In fact, he goes too far in the other direction. The filmmaker edits his own training montage like a movie trailer, with driving music and lots of fast cuts. The film constantly shifts between webcam footage and professionally shot footage. After the focus shifts to the Russian conspiracy, Fogel introduces a heavy-handed “1984” framing device, where Rodchenkov reads from Orwell's text and illustrations appear on screen. It's all seems a little excessive, an attempt to dress up a story that already stretches across the globe.

Maybe “Icarus” just bugged me because it's trying to be two movies. If Fogel wanted to make a documentary about the Russian scandal and Rodchenkov going public, he should've focused on that. The first act just draws the audience in, thinking they're getting something personal, before being revealed as a colder movie about international affairs. And it's long for a doc too, going over two hours. Watched during a time when the current winter Olympics are winding down, “Icarus” just feels more like a belabored attempt to make me care about something I couldn't have any less interest in. [5/10]