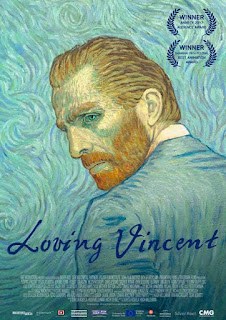 Few artist have inspired as much speculation as Vincent van Gogh. His vision and innovation, his mental illness and eccentricity, his violent death, his lack of success in life and postmortem recognition as a genius: It's pretty much the perfect romantic ideal of the struggling, misunderstood artist. Fittingly, van Gogh's life has been dramatized many times over the years, in film and song. The most recent example is “Loving Vincent.” This take happens to be animated. The film has drawn much attention for being animated by painting. Each frame was hand painted, in an attempt to replicate the swirling color of van Gogh's painting. This technique has earned the movie much critical success and now an Oscar nomination for Best Animated Feature of the year.

“Loving Vincent” is set one year after van Gogh's death by self-inflicted gunshot. Armand Roulin, the son of a postmaster, is given the mission of delivering a letter from Vincent to his brother Theo van Gogh, who has also since passed away. Roulin travels to the Parisian countryside. Along the way, he communicates with a number of people who knew van Gogh. Each provide their own impressions and memories of the man, some of them conflicting, some of them showing the details of the legendary artist's last days on Earth. 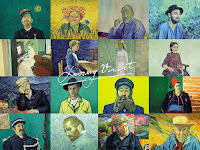 Simply as a technical achievement, “Loving Vincent” is a triumphant. How does one even paint an animated movie? Apparently, 65,000 frames of animation were hand-painted by a team of 125 painters. On the surface, this is quite impressive. I wish the degree of skill and commitment that went into “Loving Vincent” was more obvious. The viewer figures out pretty early on that the artists working on the film painted over actors portraying the movie's events in front of a green screen. While the color and waving painted lines burst impressively into your eyes, the images they bring to life are too often underwhelming. Instead of following van Gogh's burning imagination to create a visually spellbinding movie, “Loving Vincent's” presentation is essentially the most painstaking, work-intensive, and skillfully produced gimmick I've ever seen in animation.

Narratively, I struggled a bit with “Loving Vincent” as well. The decision to tell van Gogh's story through other people's eyes strikes me as an odd one. The artist himself emerges as a vaguely defined character. We hear about his habits from other people, we see the condition of both his illness and genius, and the facts leading up to his death are repeatedly pulled together. Yet we get very few insights into van Gogh's condition. At one point, the movie even attempts to re-jigger's van Gogh's suicide as some sort of mystery, flirting with the idea that he might have been murdered. Armand Roulin isn't much of a protagonist himself. He's more of a linking device for the various flashbacks that give us the information about van Gogh. Simply put, “Loving Vincent's” story does not engage on an emotional level.

Beyond a visual presentation that makes an impression of sorts, there are some other things to recommend about “Loving Vincent.” Some of the performances bring the story briefly to life. Saoirse Ronan as Marguerite Gachet, the woman who nearly had a romantic relationship with Vincent, manages to enchant and impress the viewer even while animated. There's a brief sequence involving a highly animated doctor laying out the details of van Gogh's fatal injury. There's several truly impressive shots, the painted presentation crossing cities and the countryside.

Ultimately, “Loving Vincent” is a movie that strikes me as more admirable than endearing. Clearly, those who made it had nothing but utmost respect for van Gogh. Yet they also sometimes indulge in some truly corny decisions, like ending the film by recreating the painter's most famous work. I wish the film matched the effort, which really does blow me away, that was put into creating it. It's not a movie that will stick with you because of its characters or story but because of the impressive, if somehow also oddly shallow, technique that brought it to life. [6/10]