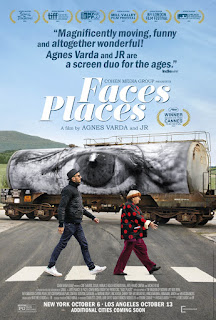 You'll have to excuse me but I'm not very familiar with the work of filmmaker Agnes Varda. The French New Wave is a major blind spot for me in general. The likes of Truffaut, Godard, and Rohmer are largely unknown to me. Varda, who is also receiving a life-time achievement Oscar this year via cardboard cut-out, is 89 years old and considered a pillar of that movement. Her latest, and possibly final movie, is a quasi-documentary called “Faces Places.” (The French title, “Visages Villages,” is also pretty catchy.) The filmmaker puts herself in front of the camera with this one, something she's apparently done before.

The film details the friendship between Varda, an elderly icon of European cinema, and JR, a photographer in his thirties. The two decide to drive across the French countryside, in a van shaped like a giant camera. They stopped in obscure corners, talking to people and making friends. JR takes pictures of the people they meet, blowing the photographs to massive size and placing them on the side of buildings. Along the way, we get insight into Varda and JR's friendship, discovering why these two unlikely friends are so close.

As the title indicates, “Faces Places” has the main duo coming in contact with many different people on their journey, hearing all sorts of stories. These range from the touching to the every day. We hear a daughter talking about her father, who worked in the mines beneath her town many years ago, brought to tears by the photographic display. One of the people they encounter is a farmer, who talks about managing a large field of land mostly by himself, with only an increasingly high-tech tractor to help him. They go inside a factory, which produces large amounts of salt to help in the creation of sulfuric acid. Among the people they meet there is an employee on his last day, before retiring. Many of these stories catch life as its happening, in a sweet and natural way.

With photography being a main aspect of the story, “Faces Places” also touches upon what a photograph means and how that has changed. By taking normal photographs of people and blowing them up to massive size, JR makes the commonplace extraordinary. There’s a definite degree of whimsy to his work. He takes pictures of fish from a marketplace, makes the photos giant, and adds them to the outside of a water silo. He takes several photos of people holding a baguette before cropping them together, making it look like they’re all holding one giant piece of bread. Yet JR’s commitment to physical photography makes him a bit of an outsider in the modern age. On their travels, they meet several young kids, snapping selfies. So his artwork has a physical value, making it even more meaningful.

More than anything else, “Visages Villages” is about the friendship between Varda and JR. They make an odd pair, a younger man always wearing sunglasses and a short, elderly woman with a cap of grey hair. Several scenes show the two talking about the progression of the film you’re watching as you’re watching it, which is neat. We get cute little glimpses into their back-and-forth, such as the two driving through the countryside, Agnes singing along with the radio. Or when the two are walking up a staircase, Agnes stopping to catch her breath, owing to her age. Ultimately, “Faces Places” concludes on a touching moment. An attempt by Varda to meet with Jean-Luc Godard, her contemporary and mentor, goes wrong but leads to an emotional conclusion between the film’s protagonists.

As someone largely unfamiliar with Varda’s output, “Faces Places” doesn’t have as much impact for me as it does some of its other viewers. However, I still found it to be a touching, entertaining little film. It straddles the line between documentary and fiction film, as some scenes – the ending especially – are pretty clearly staged. As a peak at the people living in the French countryside, and as the connection between two very different friends, it’s a compelling motion picture. At the very least, it’s encouraging me to look at some of Varda’s other films. [7/10]