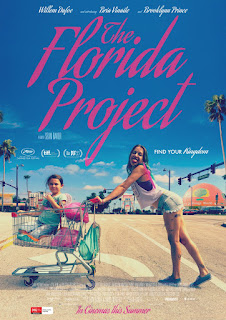 It happens pretty much every year. When it comes to the Oscars, there are always snubs. More often than not, it's some indie darling that slips through the cracks. 2018 brought us probably the strongest – maybe even the woke-est – slate of nominees we've seen in years. Even then, stuff was overlooked. Like “The Florida Project!” A tiny independent production from director Sean Baker, who received raves for his debut, “Tangerine,” the movie scooped up some critical praises and topped critics' top ten lists. Despite that, the only Oscar nomination the movie picked up was a Best Supporting Actor nod for Willem Dafoe.  So now here comes my time to judge these things.

Moonee is six. Her mom, Hailey, is tattooed and unemployed. They live together at the Magic Castle, a motel in Kissimmee, Florida. Moonee is friends with the other kids who live there, from similarly down-on-their-luck families. As the long summer stretches on, Moonee and the others try and find ways to pass the time. Hailey, meanwhile, struggles to pay her rent on time. The motel manager, Billy, is understanding but even he has his limits. Soon, circumstances threaten to separate mother and daughter.

In the common pop culture nomenclature, Florida occupies a divided world. The state has, in recent years, become the national punchline. It seems the Sunshine State is associated with bath salts, meth, alligators, and all manner of crazy, trashy people getting into the weirdest fucking shenanigans. At the same time, Florida is also the home of Walt Disney World, of vacation communities and beach front property. “The Florida Project” occupies this world of contrast. The characters sum up many of the stereotypes of Floridians. They're vulgar, tattooed, lacking in class and really poor. Inane jingles and infomercials are always playing on the TV in the messy, bedbug infested motel rooms. Though Disney is never mentioned by name, the garish decorations around the motel – a shop shaped like a wizard, a smoothie stand shaped like an orange, the bright pink color of the Magic Castle – bring the Magic Kingdom to mind. This contrast, between the low class of the hotel residents and the excess of Disney World, is built into the movie's DNA.

“The Florida Project” is also about kids trying to find ways to kill time while living in a swampy slum. Moonee and her friends have to get creative. In the opening scene, they hock loogies onto a neighbor's car. They explore abandoned houses, with equally obnoxious paint jobs, in the overgrown grassy areas. They wander around a mossy field, gawking at the grazing cows. Odd friendships bloom in this environment. The film sets out to match that childish energy, of period of frantic activity and long afternoons of sitting around and not doing anything. At first, this is a little grating. “The Florida Project” begins with kids running around, yelling, screaming, and spitting. Baker frequently shoots his scenes with a shaky, handheld approach. Eventually, the viewer gets on “The Florida Project's” wavelength and starts to dig this approach. 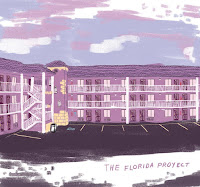 The element of “The Florida Project” that worked the best for me detail the way people below the poverty line survive. Hailey essentially pulls petty cons in order to obtain rent money. She buys discount perfume and hocks it in parking lots at a mark-up. The kids frequently grab free food from a friend's job at a dinner. At one point, mother and daughter walk into a high-class resort hotel and start eating off the complimentary breakfast buffet. Hailey has taught this craftiness to her daughter, who guilt-trips people into buying her ice cream or junk food. Eventually, Hailey has to prostitute herself in order to make end's meet, hiding her daughter in the bathroom while she's with her clients. These scenarios are grim but practical, realistically depicting the state of these things.

Willem Dafoe's nomination is well deserved, by the way. Dafoe plays Billy, the motel manager. The part cast the veteran character actor as a crotchety guy with a tough exterior and a big soft heart. Derivative as that sounds, Dafoe brings him to life beautifully. He puts up with a lot from his tenants, their eccentricities and lack of funds. Though he busts their balls, he still cares. The kids especially. He lets them play hide-and-seek in his office and, in the one of the film's best scenes, protects them from a middle-age creeper. As great as Dafoe is, little Brooklyn Prince as Moonee is the break-out performance of “The Florida Project.” The young girl seems entirely natural yet clearly has an understanding of her character, in great moments where she talks directly into the camera while eating breakfast. Bria Vinaite is also impressive as Hailey, striking the audience as an entirely genuine person that doesn't have much tact but still cares deeply for her kid. (This was Vinaite's first movie. Her second role will be in Harmony Korine's next movie, which sounds about right.)

I liked “The Florida Project,” didn't love it. It's probably because I've lived in areas like the ones depicted in this movie. I've known people like this. I've seen the good and the bad of a life like this. As with previous Oscar-nominated indie darling, “Beasts of the Southern Wild,” “The Florida Project” has attracted minor controversy for appearing to make poverty look like this whimsical thing. It's not an entirely unfair criticism, of either movie.  (Though more-so “Beasts” than this one.) The film does come dangerously close to making its setting and characters look a freak show. However, a wonderful series of performance and some grounding touches keeps that from detracting too much. Yeah, this movie is pretty good. [7/10]