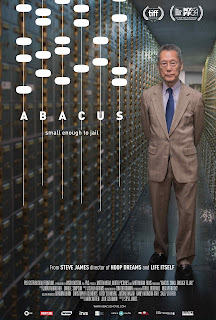 One of my favorite things about Oscar season is that it gets me to watch movies I otherwise wouldn't see. The Documentary and Foreign Language categories are great for this, in particular. As much as I love film, as closely as I follow new cinematic offerings, this two categories represent blind spots for me. Before the nominations were announced, I hadn't heard of “Abacus: Small Enough to Jail” at all. The film is apparently the latest from Steven James, the critically acclaimed documentarian behind “Hoop Dreams” and “Life Itself.” See, now I feel guilty for not keeping up with things.

“Abacus” returns us to the subprime mortgage crisis, when banks giving out mortgages to people who could not pay them contributed to the American economy heading into a recession. While most of the banks and people responsible for this were given government buy-outs and golden parachutes, one was taken to court. Abacus Federal Saving Banks, a small family-owned bank operating out of and primarily serving New York's Chinatown community, was the only financial institution in the fallout of the crisis to face criminal charges. James' film chronicles the family behind the bank, the court case, and shows both sides of whether Abacus deserved to be made an example of.

“Abacus: Small Enough to Jail” works best when focusing on the Sung family, the Chinese-American immigrants who operated Abacus. James takes his camera into the homes and personal spaces of Tom Sung, his wife, and their four daughters. We see them sitting in restaurants, eating and talking. While going over court details, Tom and his daughters also complain about their sandwiches not having mayo on it. While waiting for the jury to decide, Tom's wife also frenziedly reminds her husband and daughters to eat something and get some sleep. We learn all about Tom's background, how a desire to serve his community saw him change his profession from lawyer to banker. This stuff is personable and fascinating, each member of the Sung family making an impression on the viewer.

James' film isn't just about a family going through a trying time. It's about how tight-knit immigrant communities can be and how this can lead to persecution. We see someone connected to the case, a legal expert in Chinatown, talk to a woman who was unfairly ticketed for something. The doc's central image – a chain of Abacus workers hand-cuffed together and marched into court – can't help but make the case look like a small racial community being unfairly oppressed. James tries to add some ambiguity to the story, interviewing jurors and lawyers who believed Abacus was rightly prosecuted, but it's clear where his alliances fall. Considering what mega-corporations got away with, it was odd that Abacus was the only bank singled out. As hard as James work to put a human face on the court case, the legalese behind the case is sometimes a little tricky to get your head around.

Much of James' film takes place in the Sung family's offices and homes. He often places his camera around the various tables they sit at. When not doing this, he's usually interviewing his subjects. There are long scenes in “Abacus” devoted to recreated the court case, which is shown through illustrations, voice-over reenactments, and shots of the empty courtroom. James' visual style is pretty relaxed though. We get a few infographics about the other banks involved in the crisis or the layout of the Abacus bank. Over all, what's interesting about the film is the personalities inside and not so much how it looks.

It seems that, among people more familiar with James' overall output, “Abacus” garnered a somewhat mixed reception. Some praised it, others called it inessential. I found the family at the center of the film's story to be charming. Allowing this group of people a chance to express themselves, even while their family was in crisis, is definitely the film's best quality. Otherwise, it does strike me as a fairly routine documentary. I wasn't familiar with the court case beforehand, adding a little suspense to the movie. If you do know how things turned out, you probably won't be super compelled to check this out. But, hey, I still liked it well enough. [7/10]