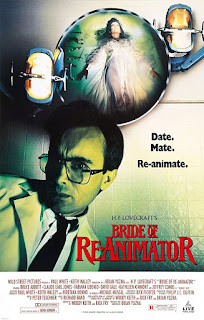 A lot of horror movies got sequels in the eighties. The decade was kind of notorious for it. So a popular cult hit like “Re-Animator” spawning a follow-up seemed inevitable. Fans were crying out for more of Jeffrey Combs' Herbert West, who was already becoming a genre icon. Just as H.P. Lovecraft was inspired by “Frankenstein” when writing the original “Herbert West – Re-Animator” serial, the filmmakers were inspired by “Bride of Frankenstein” when they made “Bride of Re-Animator.” The original's producer, Brian Yunza, would replace Stuart Gordon in the director's chair. The sequel received a mixed reception among fans and wouldn't quite repeat the originals cult success but still has its defenders.

A sequel to “Re-Animator” makes sense on another level too. The original  primarily adapted the first four chapters of Lovecraft's serial. Thus, “Bride of Re-Animator” draws primarily from the last two parts of the serial. The film picks up eight months after the original. Herbert West and Dr. Cain are working as medics in Peru, during a civil war. After the situation gets too hairy, they return to Massachusetts, arriving in Arkham. West convinces Cain to keep working with him by promising to bring Cain's dead girlfriend, Meg, back to life. Meanwhile, a police officer who lost his wife in the Miskatonic University massacre sets out to unravel the mystery, bringing a familiar face – or, rather, head – with him. 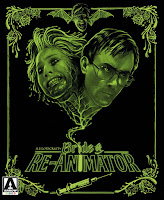 “Bride of Re-Animator's” biggest problem is a seriously cluttered screenplay. The film seemingly throws together several concepts for a sequel. Is the movie about Dr. Cain stitching together an ideal woman from dead body parts? Is it about Herbert West fiddling around in his laboratory, creating monstrous hybrid creatures? Is it about a police officer, obsessed with getting revenge on the men he blames for his wife's transformation into a mindless zombie? Or, lastly, is it about a not-quite-dead Dr. Hill plotting vengeance against West? Any of these ideas would probably be enough for one “Re-Animator” sequel. Instead of focusing on one premise, “Bride of Re-Animator” throws together all of the above. The result is a sequel overflowing with ideas but short on coherence.

Yet the scripting problems matter less when focusing on what was probably the sequel's most attractive point anyway: Jeffrey Combs hamming it up as Herbert West. Combs is still an absolute delight in the part. West has grown only more unhinged in the time since the first “Re-Animator.” The nonchalant way he goes about his gruesome business continues to contribute a dark humor the proceedings. Combs' best moments are two monologues. The first occurs when he explains the origin of every part of the undead bride. The second comes when he goes on an exquisite rant about God, creation, and man's place in the universe. This is still the part Combs was born to play, even if the movie around him is less than impressive.

You may recall that Bruce Abbot's Dr. Cain was a serious drag on the first 'Re-Animator,” a bland hero all the more boring when compared to Combs' electrifying Dr. West. The sequel does attempt to rectify this problem. Dr. Cain is still recovering from the death of Meg. Her lost has clearly left him traumatized. He obsesses over saving sickly patients, seeing his dead girlfriend in each of them. When he gets a chance to revive Meg, he leaps at it. Honestly, Cain's character arc is pretty involving up until he has to reject the dead bride and accept his new, boring girlfriend instead. At that point, he becomes the dull protagonist again.

By the end of the eighties, after a decade of increasingly graphic horror films, the MPAA started to crack down hard on the genre. Maybe because of this, “Bride of Re-Animator” is considerably less gory then its predecessor. The R-rated cut and the unrated cut feature few differences. Still, there is some impressive splatter in the sequel. Spurting arteries and graphic vivisections put in notable appearances. The Bride's final fate, her body retching itself apart, is sickeningly explicit. Perhaps more impressive are the bizarre creature effects. To pass the time, Herbert West fuses left-over body parts together, creating shambling half-human monsters. Some of these are really neat. Like a being with a woman's body on side and a man's on the other, a dog with human limbs, a head jumping around on a single leg, or spider-like fusion of fingers and eyeballs. They are pretty cool, even if they recall superior creatures in the same year's “Frankenhooker.” 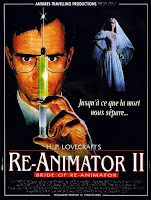 The new additions to the “Re-Animator” cast aren't very compelling. Fabiana Udenio is blandly squeaky clean as Dr. Cain's new love interest. Claude Earl Jones goes way over-the-top as the police lieutenant pursuing the film's anti-heroes. Brian Yunza is also not the director Stuart Gordon is, as “Bride” looks rather flat at times. (Though Yunza has a similarly strong command of color, especially in the crazed finale.) “Bride of Re-Animator” is a decidedly mixed affair. It's a blast seeing Herbert up to his old tricks again and the gooey special effects are strong. However, the sequel is an otherwise undercooked affair. [6/10]
Posted by Bonehead XL at 11:55 PM