Among the fan-favorite horror directors to come out of the seventies and eighties, it seems Stuart Gordon is one of the more underrated. Yes, his films have a passionate cult-following with Gordon winning accolades over the years. Yet, while the likes of John Carpenter and George Romero have become cornerstones of film nerd culture, Gordon has mostly remained beloved by hardcore fans. No documentaries have been made about his career, no books written on his life. His attempts for mainstream critical acclaim didn't happen until later in his career and were mostly overlooked. All of this is odd, since Gordon has always masterfully balanced smart and sick, rarely producing a bad film. Time for Film Thoughts to journey through his career. Though this journey may not begin where you expect... 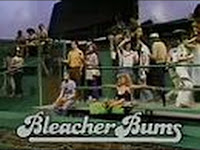 If you know anything about Stuart Gordon, you know he began his career in the theater. With his wife, Caroline, he founded the Chicago Organic Theater Company. The company would help launch the career of David Mamet and host cult oddities like the “Warp! Trilogy.” One such play that originated at the Organic was “Bleacher Bums.” In 1979, a live performance of the play was recorded for a Chicago PBS station, technically making it Stuart Gordon's cinematic debut. When I first read about it, I assumed this was one of those career relics that were basically impossible to find, like Tim Burton's "Conversations with Vincent" or Brian DePalma's “Dionysus '69.” Instead, somebody has uploaded a VHS recording of the play, from a 1985 re-broadcast, to Youtube. Granted, it's in 240 pixels and cut up into ten parts but I'm still surprised and grateful that I'm able to see Gordon's long presumed lost first feature.

The play is set during the 1977 baseball season and follows a die hard group of Chicago Cubs fans. They gather in the cheap seats, watching the game and chatting among themselves. Zig is there against his wife's wishes, who wants him to quit gambling. Greg is blind and listens to the game on a handheld radio. Decker and Marvin also partake in gambling, alternatively betting for and against the city's beloved Cubs. During the game, an attractive blonde and an overly enthusiastic male cheerleader bound through the cheap seats.

Calling “Bleacher Bums” a movie is a bit of a stretch. This is not an adaptation of the play. It's a straight-up filmed version of the play. The action is confined solely to the bleachers, the actual baseball game happening totally off-screen. The film focuses entirely on the small crowd of characters, talking among themselves, alternating between fighting each other and cheering on the home team. Gordon does attempt to bring some cinematic element to the proceedings. There are a few cuts and the occasional zoom or pan. The result is still more stage play than film, making for a somewhat stiff viewing experience. 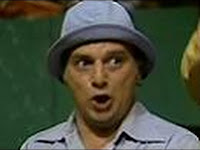 Of all the sports I give zero shits about, baseball is by far the one I give the least shits about. We are talking some sort of negative-zero amount of shits here. Maybe the thing I hate the most about baseball, aside from it being dreadfully boring, is its pretentious self-obsession with being “America's past time.” That sense that it's somehow more important than other sports. Luckily, “Bleacher Bums” is fairly short on such self-congratulatory beliefs. This is not so much a story about the camaraderie between long suffering Cubs fans or their shared love of the game. Instead,  it's about a group of bored guys, of varying bitterness, trying to pass the time. “Bleacher Bums” provides a much needed dose of cynicism to the game.

In addition to guys and girls shooting the shit among the bleachers, there's also gambling. A lot of gambling. Characters are constant making bets, putting money on the game and other near-by activities. One character is more-or-less established as a gambling addict. It's made clear that people are loosing their shirts even on something as seemingly as innocent as baseball. Gordon finds other ways to make America's most wholesome game look a little less wholesome. The film is set on a blisteringly hot summer day. Many of the characters lather themselves in sunscreen, their faces looking spotty and goopy because of it. Eventually, several guys just take their shirts off.

Gordon also targets the macho attitude of pro-sports and sports fandom. When the guys are left on their own, their behavior quickly descends into elaborate pissing contests. They switch around their bets, arguing. They drool over a busty blonde sitting near-by, even making a bet over who can get her numbers first. But this is short lived. Zig's wife barges into the bleachers about halfway through, irritating Zig by criticizing his self-destructive behavior. Later, a character called the Cheerleaders appears. This is an effeminate man wearing a crop-top and short-shorts. His obnoxious behavior – loud and campy – also infuriates the bleacher dudes. This isn't a serious component of the film but it's clear that Gordon is amused by throwing off the masculine equilibrium of this setting. 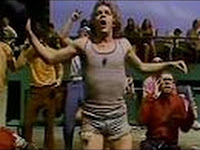 Going into “Bleacher Bums,” I wasn't sure what to expect. (Aside from baseball, I guess.) Perhaps the goofy title gave me the impression that the film was a comedy. It sort of is. There are definitely some funny moments, such as a nerdy guys attempt to convince the blonde that he works for Playboy. Zig's increasingly frustrated reaction to his wife produce some laughs. In other ways, “Bleacher Bums” is a straight ahead drama. A character yelling at another, calling him a freak and an asshole, is surprisingly raw. The film concludes with a lengthy monologue about the importance of the game, the only time “Bleacher Bums” indulges in such pro-baseball rhetoric.

“Bleacher Bums'” cast does provide some looks at the early eras of notable performers' careers. Dennis Franz, immediately recognizable even sans mustache, plays Zig. Franz brings the amount of bluster but vulnerability he would become famous for in the part. Joe Mantegna, who also wrote the screenplay, is nicely sleazy as Decker, the gambler. Michael Saad, who has amassed an extensive resume of bit parts over the years, has a flashy role as Greg. Saad doesn't overemphasize the character's blindness, to the point where you may not even notice it at first. By the end, he's made it a vital part of the character without solely defining him with it.

Some of the other actors would continue to work without making names for themselves. Keith Szarabakja, who is irrepressibly peppy as the cheerleader, continues to work to this day. He's done a lot of voice work, has had small roles in bigger movies, and is maybe best known for playing a bad guy on “Angel.” Ian Williams has had many roles over the years. Here, as Richie the dork, he successfully balances being annoying and pathetic. Yet some of the cast members did little other screen acting. Roberta Buster, likable as Melody the blonde, has only two other credits. Richard Fire, effectively gruff as Marvin the bully, would co-write “Henry: Portrait of the Serial Killer.” Aside from this and playing the shrink in “Poltergeist III,” his acting roles are limited. Naturally, Gordon also casts his wife, Caroline, as Zig's wife, where she is amusingly squirrely 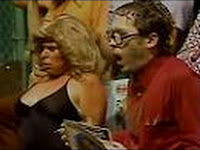 “Bleacher Bums” would receive a proper film adaptation in 2001. Directed by Saul Rubinek, it was also made for television and starred names like Brad Garrett, Wayne Knight, and Hal Sparks. And, of course, the play has been performed many different times over the years. As a movie, Gordon's “Bleacher Bums” is an interesting experience. Being simply a filmed play, it's very raw in some regards. As a directorial debut, it contains very few of the elements you associate with Stuart Gordon's later films. Considering its rarity, I was pleased to see it. Even if it's outside my usual genre, it was still a somewhat entertaining motion picture. [Grade: B-]