During my “Space Truckers” review, I noted how Stuart Gordon has primarily directed gory horror movies and goofy sci-fi movies. Maybe the director was becoming aware of that pigeon-holing too. For his eleventh feature, he would radically shift gears and direct a family film. A PG rated family film made by Disney, no less. (Unsurprisingly, the poster doesn't say it's “from the director of “Re-Animator.””) Upon closer examination, there's a pretty clear reason why Gordon would direct “The Wonderful Ice Cream Suit.” The film was based on a stage play, adapted by Ray Bradbury from his own short story. Gordon had previously directed a stage production of “The Wonderful Ice Cream Suit” and obviously decided, then and there, that the story would make a fine film.

In East Los Angeles, Gomez is known to be a conman. Despite this, he has roped four other guys into his latest scheme. Five guys will each chip in twenty dollars so they can purchase a gleaming white suit from a local shop. The guys each wear the suit for an hour that night, the ice cream suit seemingly having a magical effects on their lives. Martinez, a love-lorn young man, gains the courage to ask his beautiful neighbor out. Guitar player Domiguez attracts attention for his music. Poet Villanazul develops an audience for his way with words. Bum Vamanos, meanwhile, cleans up his life. Yet Gomez is still planning to wear the suit and skip town. Will its whimsical properties make him change his mind?

“The Wonderful Ice Cream Suit” is the third version of this story from Ray Bradbury. He wrote the original short story, adapted it for the theater, and would then write the screenplay for this film. As the title suggest, it's is a fairly goofy comedy. There's a farcical streak in the air from the earliest minutes, when Gomez chases Martinez into a alleyway... Just to measure him with a tape measure. Yet the silly comedy is not what marks “The Wonderful Ice Cream Suit” as Bradbury's work. Instead, it's the story's element of whimsical, magical-realism. The film is seemingly set in our world but little, fantastical touches distinguish it. People break into sound and dance on the streets. Simple words can stir a crowd to march across the city. And a white suit can change somebody's life. His earlier work may not suggest it but Gordon nails this tone fantastically.

Bradbury's play was inspired by the friendships he experienced while living in a largely Latin American community as a poor young man. Through this lens, it's possible to read “The Wonderful Ice Cream Suit” as a celebration of Latin American culture. Of the five main characters, two are played by Puerto Rican actors and two by Mexican-American actors. (And one by, uh, an Italian.) The film steeps itself in Latin-American culture. A Mariachi band acts as something of a Greek chorus, appearing on the sidelines of several scenes. Music, dancing, and Mexican cuisine crop up all throughout the film. This lends a colorful energy to the film. “The Wonderful Ice Cream Suit” is a really fun movie to watch and much of that stems from the vibrant culture it draws from.

One, however, must remember that Bradbury's story was written back in 1957. “The Wonderful Ice Cream Suit” was certainly a more than fair depiction of Latin-American life back in the late fifties. To modern sensibilities, it can appear a little less sensitive. Yes, everyone in the story is very poor. Gomez lives in near poverty, the others eventually co-habituating with him. One of those characters is a homeless man, always filthy, who is fond of smoking, drinking, and eating tacos. The story concludes near a bar, in a scene that features chubby mamachita, a muscle car, and a guy named Toro. And, like I said, one of the main characters is played by a man in brownface. So the film was obviously intended to be a sincere celebration of this culture. At times, however, it comes off as a little stereotypical.

As I said, “The Wonderful Ice Cream Suit” is Stuart Gordon's first (and thus far only) PG-rated family film. Yes, the movie was produced by Disney. However, the Mouse Factory chose to distribute it under their Touchstone label. And it's easy to see why. I'm not sure if the film would get a PG rating today. One character is constantly smoking, a habit the MPAA comes down on a lot harder today. There's also constant references to drinking. Most surprisingly, in the last act, a character is greeted by what appears to be a prostitute. When the other guys point out that he only has five minutes in the suit left, he decides that's more than enough. It's still pretty tame but, considering the PG-rating is now solely the domain of squecky clean family fair, the content is still a little edgier than expected. 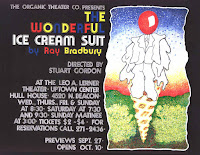 “The Wonderful Ice Cream Suit” works best when embracing the whimsical energy at the story's center. This is best exemplified during the film's several musical numbers. The opening credits are brought to life with colorful, swirling sand art, the titular song playing along. This is an enchanting way to open the film. After Domingeuz dons the white suit, he plays his guitar inside an apartment complex. Soon, every woman in the building is singing and dancing with him, kicking and stepping up and down the stairs and into the streets. When Villanazul wears the suit, a scene that isn't technically a musical number but sure feels like one follows. Before a crowd, he delivers a poem about community pride. What follows is a scene of film walking through the desert, the other parts of the city, and his own street. All of these scenes perfectly capture the heart-warming energy central to the film's success.

The other side of “The Wonderful Ice Cream Suit's” tone is its goofier comedy. This farcical side grows as the film goes on, becoming especially notable by the end. When Vamanos puts on the suit, he immediately does what the others told him not to do. He heads to a local bar, drinking, smoking, and eating. Dancing with Ruby, a popular woman at the bar, enrages her boyfriend, Toro. The other four guys immediately intervene, not wanting the suit to get damaged in a fight. Each man convinces Toro to punch them instead, sometimes multiple times. Gordon plays this was broadly as possible, the punches coming in slow motion, the men grimacing ridiculously. This builds towards an even sillier scene, Toro attempting to run Vamanos down with his car. The climax is even goofier, featuring the bum leaping atop the moving vehicle. It's silly stuff but admittedly enjoyable.

“The Wonderful Ice Cream Suit” probably wouldn't work at all if it wasn't for the cast. Yes, it takes a minute to accept Joe Mantegna as Gomez, a Hispanic man. Once you get over that, Mantegna's performance becomes quite good. He has an impressive comedic energy, making the character active and enjoyable. Clifton Collins Jr., previously seen in “Fortress,” appears as Martinez, the lovelorn kid. Collins projects a pure sincerity, making him perfect for a part like this. Collins' gee-whiz attitude makes you root for this kid, in his journey to find love and connect with the woman of his dreams.

There's two artists, of sorts, in the group. Esai Morales plays Dominguez, the guitar player. As written, the character is not quite a would-be ladies' man but he's more sincere than that implies. He has a genuine love for his music. Morales has just the right balance for the character, managing to make him likable while maintaining the character's slightly edgy side. More gentle is Gregory Seirra as Villanazul, the poet. Seirra projects a natural intelligence, paired with a slight lack of confidence. This makes the utter joy he gains from the suit feel especially well earned. Both performers do very well in the part, making the characters seem real and lovable.

Of the central five characters, only one strikes the viewer as unlikable. Vamanos first appears covered in dirt and grime, with a full beard. His appearance is such that, at first, you don't even realizes its Edward James Olmos playing him. The way the character is treated strikes the viewer as slightly mean-spirited. Gomez cruelly dismisses him several times, usually off-handedly. Yet you kind of understand this reaction, as Vamanos is kinda' annoying. He shouts and mugs. However, as the other four grow attached to the character, so does the audience. At the end, when Vamanos insists the others remove the suit so it doesn't get damaged, you've grow quite fond of him.

Yes, “The Wonderful Ice Cream Suit” has a clear sentimental streak. It's a movie about friendship and trying to achieve one's dreams, even when life around you is hard. The film concludes with a touching scene of the five guys bonding over what they've accomplished that day, reflecting on what friendship has brought them. It comes dangerously close to being sappy. Yet “The Wonderful Ice Cream Suit's” utmost sincerity keeps the film from feeling treacly or preachy. You're happy to see these guys achieve their dreams. Moreover, you're happy to see them find each other. That sweetness helps smooth over some of the tonal inconsistencies.

“The Wonderful Ice Cream Suit” was probably never going to be a crossover success. However, the movie's release was really unfair. After receiving positive reviews at various festivals, it ended up being dumped on video with little fanfare. There, naturally, it wasn't seen by very many people. Still, the film deserves to be seen and not just because it's an outliner in Gordon's career. It's a goofy and light-hearted but ultimately amusing little picture. The film is less than eighty minutes long too, so you've really got no excuse for giving it a look. Go in with the right mindset and “The Wonderful Ice Cream Suit” may charm you too. [Grade: B]
Posted by Bonehead XL at 11:48 PM