You may recall hearing about it. In 2001, a Texas woman struck a homeless man with her car. He became lodged in the windshield. Instead of going to a hospital or calling an ambulance, she went home. She left the man stuck in her windshield, in her garage, where he slowly bled to death. It was one of those salacious, horrifying news stories that showed the depth of human ignorance and cruelty. When the story was new, it was passed through in-boxes and around water coolers. The story clearly struck a chord with Stuart Gordon. In 2007, he would transform the shocking true story into a movie, putting his own twist on the event. “Stuck” would win Gordon some of the best reviews of his career.

Thomas Bardo is having a very bad day. Recently let go from his job, he's been struggling to find work. His landlord suddenly kicked him out this morning. He wasted all day waiting for an appointment at the welfare office. Now, he's been removed from the park he's sleeping in. Brandi Boski, meanwhile, is having a pretty good day. She's up for a promotion at her nursing home job. She's been out all night with her drug dealer boyfriend, taking ecstasy at a dance club. While driving home from the club, Brandi strikes Thomas with her car. Frightened about how this will affect her job, she leaves the homeless man lodged in her car windshield, sitting inside her garage. Now Bardo has to fight to survive while his unwilling captor plots to finish him for good.

With his most recent film, Gordon continues to freely mix genre. “Stuck” is another unlikely crossover. The film is a mixture between a grim, facts-based thriller and an absurdist comedy. The film depict the true events without much exaggeration, playing up the casual cruelty of those involved. Gordon shows the stomach-churning violence of the situation, brutally revealing what a speeding car can do to a human body. However, perhaps to save our collective sanity, Gordon approaches the material with a detached sense of gallows humor. The people responsible for this crime are so stupid, that it becomes funny. The scenario is so horrifying callous, that it becomes absurd. The approach is widely successful. “Stuck” is an extremely dark comedy, exposing the sickening insensitivity people are capable of. 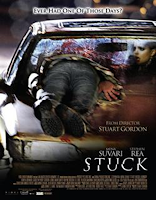 In fact, cruel indifference is the primary theme of the film. Throughout the film, Bardo faces a number of indignities from people simply too petty to give a shit. Even before being hit by a car, he puts up with a lot of bullshit. His landlord kicks him and insists he can't take his clothes with him. The guy at the job office is deeply condescending to a man who has been waiting all day, forcing him to fill out paperwork he's already done. A police officer removes him from a park bench, more concerned with upholding laws then protecting another human's well-being. This continues after he's struck by Brandi. While on a walk, a man's dog sneaks into the garage and licks Tom's wounds. When the dogwalker sees the blood, he's only concerned about the pooch's health. Later, after the son hears Bardo's screams, a Mexican family nearly calls the police. The father, however, insists they stay quiet over fears of being deported. “Stuck's” point isn't that people are cruel to other people. It's that they are so casual about it.

There's also an element of class distinction in “Stuck.” Tom Bardo is homeless, unemployed, and totally penniless. He's also a dignified man who works hard. He's simply fallen on a streak of bad luck. Bardi Boski, meanwhile, is gainfully employed, owns a house, and has enough spending money to buy drugs and go to clubs on the weekend. She's also a vulgar idiot with zero consideration for the people around her. The contrast is deliberate. From a screenwriting perspective, this is simply to mark the homeless man as the story's hero and the driver as its villain. However, these themes serve another purpose. Success is random and the universe is as wantonly cruel as the people who populate it.

An aspect of the true story that fascinated Gordon was the woman having the job of caregiver. The focus on that central irony appears in the film. Yes, Brandi is a nurse. She's apparently a pretty good one too. One elderly patient requests her by name all the time. She impresses her supervisor enough to be offered a leadership position. There's definitely some dramatic irony in a person capable of such casual cruelty literally taking care of people for her job. What makes Brandi a truly awful person is her inability to take responsibility for anything. Throughout the film, she repeatedly blames Tom for what happened. When he refuses to die, she plans to murder him, strictly to save her own skin. She might be a nurse but she's mostly a person incapable of owning up to her mistakes.

Most of “Stuck's” humor comes from the trashy antics Brandi and her drug-dealer boyfriend, Rashid, get up to. Rashid claims to be a tough guy gangster, saying he's disposed of a body before. As the story progresses, it becomes clear that this is an act. He's a buffoon and Brandi is either too enamored or too shallow to notice. This humorous streak peaks during a scene where Brandi arrives at Rashid's apartment, unannounced. She discovers her boyfriend with another woman. Instead of doing the reasonable thing – both women confronting the man about his infidelity – Brandi attackers the other woman. She drags her out of bed, nude, and smacks her face with an iron skillet, before tossing her out the door. It's a moment of “Jerry Springer” shenanigans, inserted into a grim story. This moment draws attention to Brandi's nonchalant cruelty and stupidity. it's also deliriously funny.

“Stuck” isn't quite a horror film, by any traditional metric. However, it features the kind of sickening gore that wouldn't have been out of place in Gordon's earlier films. Few details concerning Tom's situation are spared. During a queasy scene, he pulls himself from the shattered window, the glass cutting him further. Quickly, he realizes that he's been impaled by a windshield wiper. The film focuses on his agony as he pulls the wiper from his gut. Later, while laying on the garage floor, we see the broken bones protruding from his skin. Later, a dog licks at the raw fracture, another nauseating moment. Perhaps the gore in “Stuck” is even more effective because its all totally plausible. The movie's reality-based roots makes its violence – violence that might've actually happened – extra upsetting.

The actor playing Tom Bardo faced some unique challenge. Starring in “stuck” meant squirming inside an uncomfortably tight spot for weeks. Luckily, Gordon found someone up to that feat. Stephen Rea, an underappreciated character actor, plays the part. Rea's performance is grueling. He spends most of the movie screaming, grunting, or moaning in agony. Yet, no matter how extreme the situation gets, Rea maintains the character's dignity. No matter how bad things gets, Rea continues to focus on the part's humanity. Rea's strong acting characterizes Bardo as a survivor, above all else. 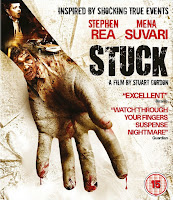 As the other main character, Mena Suvari has a different sort of challenge. She's playing someone with few redeeming features. Suvari makes sure the audience understands that Brandi, at least, thinks what she's doing is justified. Suvari brings an effectively desperate quality to the part. All she can think about is loosing her job. As things get worst, her composure cracks up more and more. By the end, she's screaming and crying. All the while, she defers blame to others. It's a good bit of acting and Suvari makes this character seem real, if not sympathetic. (There was some minor controversy around Suvari's casting. In real life, the driver was black. Gordon dismissed any apparent whitewashing as strictly a budgetary choice. They couldn't get the movie funded with a black actress in the lead.)

“Stuck” pulls together a solid supporting cast too. Russell Hornsby is hilarious as Rashid. He's a scumbag, selling drugs primarily as a way to manipulate women into sleeping with him. Despite this, Hornsby makes the guy oddly likable. He's such a clueless idiot, running on a macho bravado that he doesn't seem to entirely believe, that you end up feeling a little sorry for him. Rukiya Bernard appears as Tanya, Brandi's co-worker. She's pivotal to an amusing scene. Brandi and Rashid have to explain where all the blood and gore have come from, leading to some funny awkward planning. Stuart Gordon also finds a role for his wife, naturally. Once again, Caroline Purdy-Gordon appears as a strict female authority figure. This time, she's nurse supervisor Petersen and is enjoyably bitchy.

In real life, this story had a tragic ending. The homeless man died after suffering for several hours, even though basic medical attention would've saved his life. The woman got away with it for a few months, before bragging about the crime at a party. She's currently serving out a fifty year prison sentence. But cinema gives us a chance to give real life happier endings. In “Stuck,” Bardo escapes the car. When his captors attempt to kill him, he strikes back. He stabs Rashid in the eye with a pen. He strikes Brandi with her own car. The woman then ignites gasoline that she spread around the garage in an attempt to disguise the murder. Tom walks away, brutalized but alive. The first time I saw “Stuck,” aware of how the real incident ended, this ending surprised me. Justice is served, at least in fiction.

When paired with “King of the Ants” and “Edmond,” “Stuck” seems to form a thematic trilogy of sorts. Call it Stuart Gordon's Nihilism Trilogy. Each one of the three films deals with man's inhumanity to man, building towards a point about people being rotten. Ultimately, “Stuck” may be the most optimistic of the three movies. At the story's end, Tom is free, alive, and gets to keep his humanity. “Stuck” would be a critical success, considered one of the year's best film by some. Most surprisingly, “Stuck” even received a remake in India. It's all a clear indicator of how good this darkly hilarious and sickly insightful film is. [Grade: A-] 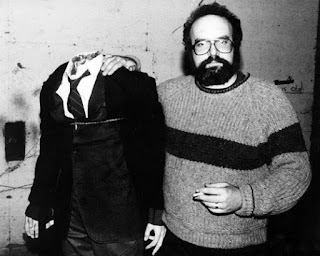 It seemed the critical praise Gordon's most recent films received was setting his career up for a new chapter. Instead, ten years have passed without a new Stuart Gordon movie coming out. It would seem that it's difficult to get the kind of weird-ass movies he likes to make funded these days. Gordon attempted to Kickstart a film version of "Nevermore," a one-man play about Edgar Allan Poe starring Jeffrey Combs. That sounded amazing but, alas, the campaign was unsuccessful. Since than, Gordon has returned to the theater, directing a musical version of "Re-Animator." I certainly hope Gordon gets to make another movie some day, though "Stuck" would be a hell of a note to end things on. After watching all his films, I truly do believe he's one of our more underrated masters of horror.